Roisin McAuley is a BBC Radio Ulster and currently presents Sunday Sequence. She grew up in Cookstown in County Tyrone went to a convent boarding school, and then to Queen's University Belfast to study history. [1]

She joined BBC Northern Ireland in 1969 and was the broadcaster's first Catholic female newsreader and announcer. [2] She went on to become a reporter for BBC programmes such as Spotlight, Newsnight , Panorama and File on 4 . She has also produced and directed television documentaries for ITV and Channel 4 and written and presented programmes on BBC Radio 3 and 4. [3]

Roisin McAuley's first two novels, Singing Bird and Meeting Point, were sold at auction to Headline (world rights) who published in 2004 and 2005. The US rights sold to HarperCollins, Dutch rights to House of Books and the German rights to Droemer. The rights to Roisin McAuley's next two books, "Finding Home" and "French Secrets" were sold to Time Warner Books UK in 2005. [4]

Roisin is the sister of BBC broadcaster and musician Tony McAuley and niece of Glens of Antrim painter Charles McAuley.[ citation needed ]

She lives in Northern Ireland with her husband, Richard.[ citation needed ]

BBC Radio Ulster is a Northern Irish radio station from the BBC, broadcasting from Broadcasting House on Ormeau Avenue in Belfast city centre. It is a division of BBC Northern Ireland.

BBC Radio Foyle is a BBC Northern Ireland local radio station, serving County Londonderry in Northern Ireland. It is named after the River Foyle which flows through Derry, the city where the station is based. The station broadcasts from BBC's Northland Road studios on 93.1 FM and 792 MW in Derry, County Londonderry. There is also a small television studio based there used for interviews with the interviewee sitting in front of a CSO screen which normally has a live view of Derry. Since it broadcasts from a point close to the border between County Londonderry and County Donegal in the Republic of Ireland, it includes some coverage of the latter county.

Martin Dillon is an Irish author, journalist, and broadcaster. He has won international acclaim for his investigative reporting and non-fiction works on the Northern Ireland conflict. Dillon’s bestselling trilogy, The Shankill Butchers, The Dirty War & God and the Gun, is considered the definitive account of the Troubles in Northern Ireland. Dr. Conor Cruise O’Brien, the renowned historian and scholar, described him as "our Virgil to that Inferno". The Irish Times hailed him as "one of the most creative writers of our time".

Gerald Michael "Gerry" Anderson, was a radio and television broadcaster for BBC Northern Ireland. Renowned for his unique style and distinctive sense of humour, Anderson often referred to himself on his show, as "Turkey Neck", "Puppet Chin" or "Golf Mike Alpha". 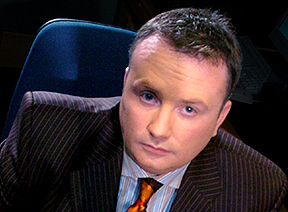 Stephen Raymond Nolan is a Northern Irish radio and television presenter for BBC Northern Ireland and BBC Radio 5 Live. His television and radio shows have been accused having a pro-unionist bias and have been referred for impartiality/bias by Ofcom to the BBC. The Nolan Show rejects such claims.

David Dunseith was a Northern Irish journalist and broadcaster with BBC Northern Ireland. He presented BBC Radio Ulster's 'Talk Back' & 'Seven Days' programmes. His career spanned the troubles covering the turbulent and tragic events of recent years from the Falls Curfew in 1970 to the Omagh atrocity in 1998. He reported on all the Northern Ireland political initiatives from Sunningdale to the Good Friday Agreement. 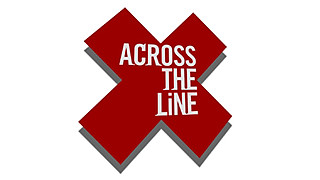 Across the Line is a programme on BBC Radio Ulster. It broadcasts Monday, 8pm to 10.00 pm, presented by Rigsy. It is also known for its popular website at www.bbc.co.uk/atl.

Martin O'Brien is an Irish journalist, newspaper columnist, broadcaster, media/communications consultant and speech writer. He specializes in religious affairs and is the Northern Correspondent of The Irish Catholic newspaper. He covered the election of Pope Francis for BBC Northern Ireland. He left the BBC on 31 March 2013, having been on the staff for 28 years, and has established his own business, Martin O'Brien Media, based in Belfast.

Tony McAuley was a Northern Irish broadcaster, producer and musician.

Charles (Charlie) McAuley (1910–1999) was an Irish painter. He was born in Gruig, Glenaan, Ireland, one of the nine Glens of Antrim, on 15 March 1910. Despite being from a small rural village, Charles pursued painting from an early age, in an area when farming was one of the main sources of life and income. He went on to become a landscape and figurative painter.

Linda McAuley is an award-winning presenter for the BBC Radio Ulster consumer advice programme On Your Behalf.

On Your Behalf is a consumer affairs radio programme broadcast on BBC Radio Ulster on Saturday mornings and repeated midweek in the evening. The programme, first broadcast in September 1995, offers advice to listeners' consumer problems and reports on the latest developments in consumer law and how these may affect their rights. It is presented by Linda McAuley.

Your Place and Mine is a Northern Irish radio programme.

Pearse McAuley is a former Provisional IRA member, who escaped from Brixton Prison in London on 7 July 1991 along with his cellmate Nessan Quinlivan, while awaiting trial on charges relating to a suspected plot to assassinate former brewery company chairman, Sir Charles Tidbury.