Rosiska Darcy de Oliveira is a Brazilian journalist and feminist writer. She was born in Rio de Janeiro in 1944, she graduated in Law from the Pontifical Catholic University. In the 1960s, she began her professional career as a journalist at Revista Senhor , Jornal do Brasil , Revista Visão and O Globo .

In 1970, her journalistic career was interrupted by exile. Accused by the military dictatorship of denouncing the systematic practice of torture against political opponents, she was forced to take refuge in Geneva, Switzerland. With no native language, exile challenged her to build a new professional identity. A meeting in Geneva with Paulo Freire redirected her work to the field of education, an interest that was deepened in learning from Jean Piaget at the Faculté de Psychologie et Sciences de l'Education, University of Geneva. In 1971 she founded the Cultural Action Institute with Freire and took part in the process of rebuilding the educational system in Portuguese-speaking African countries recently freed from the colonial regime. The book Living and Learning: experiences in popular education (Brasiliense, 1980) came out of this period.

In the 1970s, she actively participated in the emerging international women's movement. This experience inspired the essays Les Femmes en Mouvement et l'Avenir de l'Education (University of Geneva, 1978) and Educations et sociétés (UNESCO, 1979). The essay Féminiser le Monde (Geneva, 1978) expresses the appreciation of female culture as a factor in enriching human relationships. She created a new course at the University of Geneva on the Feminine, a theme that supported her doctoral thesis at the Faculté de Psychologie et Sciences de l'Education: La Formation des Femmes com Miroir de l'Ambiguité. She taught for ten years at this university.

With the reestablishment of democracy in 1980, she returned to Brazil and continued her writing activity on the issues of education and the feminine. She was a special advisor for four years to the vice-governor of Rio de Janeiro, Darcy Ribeiro, who, inspired by Anísio Teixeira, invested in the revaluation and quality of public education.

In defense of the female cause, she strove to promote the arrival of women in the places of knowledge and power as a requirement for the improvement of democracy. In 1991 she founded and chaired the Coalition of Brazilian Women. In 1995, she was appointed by the President of the Republic as president of the National Council for the Rights of Women, responsible for the implementation in Brazil of Equality Strategies, National Program for the Promotion of Gender Equality (Brasília, 1996).

In her action at the international level, she co-chaired the Brazilian Delegation to the World Conference on Women in Beijing, integrated the Women and Development Council of the Inter-American Development Bank and represented Brazil on the OAS Inter-American Commission of Women. She proposed the creation and was the first president of the Specialized Meeting of Women in Mercosur. She chaired the international network Terra Femina: a feminine look at global themes at the UN Conferences on Population, Human Rights, Environment and Social Development. A UNESCO consultant on The emergence of women in culture, she was a member of the World Panel on Education for Sustainable Development and the World Panel for Democracy, chaired by former UN Secretary General Boutros-Ghali.

As a contribution to the city in which she lives, she has chaired the Rio Como Vamos movement since 2007 to promote citizen participation and responsibility. She was Vice President of Culture at the Commercial Association of Rio de Janeiro and is a member of the Board of Directors of ACRJ, the Technical Council of the National Confederation of Industry and the Brazilian Institute for the Defense of the Disabled (IBDD).

A Professor at PUC-Rio, she deepened, over ten years, in courses, conferences and essays her research on literature written by women. Her vision of female culture as a civilizing factor inspired her essay Elogio da Diferença (Brasiliense, 1991), also published in the United States, In Praise of Difference (Rutgers, 1998), and reissued, with a new introduction, by Editora Rocco in 2012 .

Time Reengineering (Rocco, 2003), a second milestone in her essay writing, extended her field of analysis to the problems of using time in the contemporary world, focusing on its impact on the family.

The reunion with the Brazilian roots and the mother tongue fertilized her literary vocation, carried out in four books of chronicles and tales: The Lady and the Unicorn (Rocco, 2000), Autumn of Gold and Sangue (Rocco, 2002), The Nature of Scorpion (Rocco, 2006) and Ground Floor (Rocco, 2010). Two new books, Elogio da Liberdade: essays on ethics in times of transition and Masquerade Ball, chronicles of the first decade of the 21st century (both in press), were published by Editora Rocco in 2013.

From 2007 to 2015, she chaired the Rio Como Vamos movement to promote citizen participation and responsibility. She was Vice President of Culture at the Commercial Association of Rio de Janeiro and was a member of the Board of Directors of ACRJ, of the Technical Council of the National Confederation of Industry and of the Brazilian Institute for the Defense of the Disabled (IBDD), of PEN Clube do Brasil, of the Council Scientific Museum of Tomorrow.

Among her decorations and distinctions are the Order of Rio Branco, given by the President of the Republic, the Euclides da Cunha Medal of the Brazilian Academy of Letters, the Tiradentes Medal of the Legislative Assembly of the State of Rio de Janeiro, the Pride Carioca Award from the City Hall of Rio de Janeiro, and the Nísia Floresta Medal from the state of Rio Grande do Norte.

Fouzia Rhissassi is professor of social sciences at the faculty of arts at Ibn Tofail University in Kenitra, Morocco. Currently she holds a position of the UNESCO Chair on Women Rights.

Pomba Gira is the name of an Afro-Brazilian spirit evoked by practitioners of Umbanda and Quimbanda in Brazil. She is the consort of Exu, who is the messenger of the Orixas in Candomblé. Known by many names, or avatars, Pomba Gira is often associated with the number seven, crossroads, graveyards, spirit possession, and witchcraft.

Beatriz Jaguaribe is a professor of comparative communications in the School of Communications at the Universidade Federal do Rio de Janeiro and the recipient of a Guggenheim Fellowship.

Márcia Cristina Bernardes Barbosa is a Brazilian physicist known for her research on the properties of water, and for her efforts for improving the conditions for women in academia. She is a professor at UFRGS, and a director of the Brazilian Academy of Sciences.

Antonia Darder is a Puerto Rican and American scholar, artist, poet and activist. She holds the Leavey Presidential Endowed Chair in Ethics and Moral Leadership in the School of Education at Loyola Marymount University. She also is Professor Emerita of Educational Policy, Organization, and Leadership at the University of Illinois at Urbana-Champaign.

Vivian Ostrovsky is an experimental filmmaker and curator.

Yeda Pessoa de Castro is a Brazilian ethnolinguist. With a PhD in African Languages at the National University of Zaire, she is a Technical Consultant in African Languages for the Museu da Língua Portuguesa at the Estação da Luz in São Paulo, a Member of the Academia de Letras da Bahia and of the ANPOLL's GT de Literatura Oral e Popular. Also is a Permanent Member of the Brazilian Scientific Committee of the Project "Slave Route" by UNESCO.

Belita Koiller is a Brazilian Professor of Physics at the Instituto de Física, Universidade Federal do Rio de Janeiro (UFRJ), Brazil. She is a Condensed Matter Theorist, and has contributed to the understanding of the properties of disordered solids, particularly disordered chains and semiconductor alloys. More recently, she has been interested in quantum control of individual electron spin and charge in semiconductors, aiming at applications in quantum information and quantum computing.

Nilcéa Freire was a Brazilian academic and politician. After a career as a medical researcher and professor, Freire moved into university administration. She oversaw graduate studies and budgetary concerns before being promoted as dean of the Federal University of Rio de Janeiro. In 2004 she became a government minister, as the Special Secretariat of Policies for Women. She served from 2005 to 2007 as the President of the Inter-American Commission of Women. At the end of her term, she became the Brazilian representative for the Ford Foundation and oversaw their programs to promote opportunity and justice for underrepresented minorities.

Ana Maria Bahiana is a Brazilian-born Los Angeles-based American author, journalist and lecturer known for her work in cultural journalism. She has worked in a variety of media: newspapers, magazines, television, radio and the Internet. 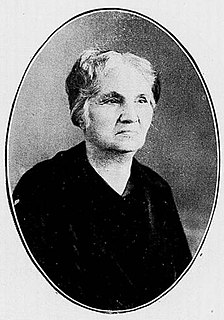 Leolinda de Figueiredo Daltro was a Brazilian feminist teacher, suffragist and indigenous' rights activist. In 1910, she was one of the founders of the Feminine Republican Party, which advocated for the Brazilian women's right to vote. 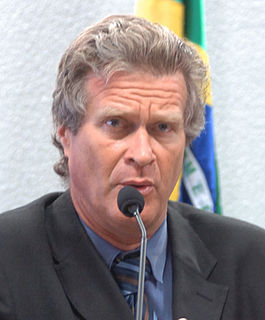 Alfredo Hélio Syrkis was a Brazilian writer, journalist, urban environmental manager and former parliamentarian, having served as the chairman of the Joint Climate Change Congressional Commission – CMMC, and vice-chairman of the Commission of Foreign Affairs and National Defense of the House. He was the Brazilian Green Party's presidential candidate in the 1998 election. In 2010, he was elected to the Brazilian national parliament (2011–2014) but decided not to run for re-election in 2014.

Euphrasie Kouassi Yao is an Ivorian politician, who is the current special advisor to president Alassane Ouattara in charge of gender. She has also served as the Minister for the Promotion of Women, Family and Child Protection, and as a UNESCO chair on their committee on Water, Women and Decision-making.

Jacqueline Berenstein-Wavre was a Swiss politician who spent her political career in Geneva. She fought for women's rights in the workplace.

Fawzia Abd Al-Minem Al-Ashmawi is an Egyptian academic, writer, and translator. She works as a Professor of Arabic Literature and Islamic Civilisation in the University of Geneva. She had won the Golden Award in Sciences and Arts from Egypt.