His father, MacDara, was prince of the Uí Bairrche in the country around Carlow, Ireland. His mother was sister of Dubhthach moccu Lughair, the Chief Ollam of Ireland, the first of Patrick's converts at Tara, and the apostle's lifelong friend. Fiacc was a pupil to his uncle in the bardic profession and soon embraced the Faith. Subsequently, when Patrick came to Leinster, he temporarily stayed at Dubhtach's house in Uí Ceinnselaig and selected Fiacc, on Dubhtach's recommendation, to be dedicated bishop for the converts of Leinster. [1]

Fiacc was then a widower; his wife had recently died, leaving him one son named Fiacre. Patrick gave him an alphabet written with his own hand, and Fiacc acquired with marvellous rapidity the learning necessary for the episcopal order. Patrick consecrated him, and in after time appointed him chief bishop of the province. Fiacc founded the church of Domnach-Fiech, east of the Barrow.

After many years of austere life in this place, Fiacc was led by angelic command to remove to the west of the Barrow, for there "he would find the place of his resurrection". The legends state that he was directed to build his oratory where he should meet a hind, his refectory where he should find a boar. He consulted Patrick, the latter fixed the site of his new church at Sletty -- "the highland"—a mile and a half northwest of Carlow. This foundation does not survive, but a medieval church and two undecorated crosses do. [2]

Here he built a large monastery, which he ruled as abbot while at the same time he governed the surrounding country as bishop. His annual Lent retreat to the cave of Drum-Coblai and the rigours of his Lenten fast, on five barley loaves mixed with ashes, are mentioned in his life by Jocelyn of Furness.[ citation needed ] He suffered for many years from a painful disease and Patrick, commiserating his infirmity, sent him a chariot and a pair of horses to help him in the visitation of the diocese. He lived to a very old age; sixty of his pious disciples were gathered to their rest before him. He was buried in his own church at Sletty, his son Fiacre, whom Patrick had ordained priest, occupying the same grave. They are mentioned in several calendars as jointly revered in certain churches. [2]

St. Fiacc is the reputed author of the metrical life of St. Patrick in Irish, a document of prime importance as the earliest biography of the saint that has come down to us. Modern scholars generally think it was composed later, in the seventh or possibly even the eighth century. [3]

A hymn on St. Brigid, "Audite virginis laudes", has been sometimes attributed to him, but on insufficient grounds.[ citation needed ]

Saint Fiacre is the name of three different Irish saints, the most famous of which is Saint Fiacre of Breuil, the Catholic priest, abbot, hermit, and gardener of the seventh century who was famous for his sanctity and skill in curing infirmities. He emigrated from his native Ireland to France, where he constructed for himself a hermitage together with a vegetable and herb garden, oratory, and hospice for travellers. He is the patron saint of gardeners.

Patrick Francis Moran was the third Roman Catholic Archbishop of Sydney and the first cardinal appointed from Australia.

The Patrician Brothers, or Brothers of Saint Patrick, are an Ireland-based Roman Catholic congregation for the religious and literary education of youth and the instruction of the faithful in Christian piety.

Saint Patrick was a fifth-century Romano-British Christian missionary and bishop in Ireland. Known as the "Apostle of Ireland", he is the primary patron saint of Ireland, the other patron saints being Brigit of Kildare and Columba. Patrick was never formally canonised, having lived prior to the current laws of the Catholic Church in these matters. Nevertheless, he is venerated as a Saint in the Catholic Church and in the Eastern Orthodox Church, where he is regarded as equal-to-the-apostles and Enlightener of Ireland. He is also regarded as a Saint within the framework of their respective doctrine by the Anglican Communion and the Lutheran Churches.

Killeshin is a village in County Laois, Ireland on the R430 regional road. Killeshin is a small rural community situated five kilometres west of Carlow town and overlooks the picturesque Barrow Valley. The church at the foot of the Killeshin hills is the site of an early Christian monastery.

The Roman Catholic Diocese of Ossory is a Roman Catholic diocese in eastern Ireland. It is one of three suffragan dioceses in the ecclesiastical province of the Metropolitan Archbishop of Dublin. Most recently it was led by Dermot Farrell, who was appointed on 3 January 2018 and ordained bishop on 11 March 2018. He was appointed Archbishop of Dublin on 29 December 2020 and remained Apostolic Administrator of Ossory until 2 February 2021.

Saint Colmán Elo was born in Glenelly, Ireland in what is now County Tyrone. He is famed in Irish hagiography.

Columba of Terryglass (Colum) was the son of Ninnidh, a descendant of Crinthainn, King of Leinster. Columba was a disciple of St. Finnian of Clonard. He was one of the Twelve Apostles of Ireland.

Sletty, Sleaty, or Slatey, is a civil parish in County Laois, Ireland. It is situated some 2 km north-north-west of the town of Carlow. It was once the see of a bishopric, founded by Saint Fiacc in the fifth century, but this was later transferred to Leighlin. It was at Sletty, according to James Joyce in his novel Ulysses, that Cormac mac Airt 'suffocated by imperfect deglutition of aliment', i.e. that he choked on a fishbone.

Saint Iserninus was an early Christian missionary of Ireland who is associated with Saint Patrick and Saint Auxilius in establishing Christianity in the south of that island. More recent research associates him not with Patrick but with Palladius.

Events from the 5th century in Ireland.

Uí Bairrche was an Irish kin-based group that originally held lands in the south of the ancient province of Leinster. Another south Leinster kin group associated with the Uí Bairrche were groups of the Fothairt. The south of Leinster was dominated by the Uí Chennselaig in the 8th century. Uí Bairrche held lands around Carlow, however Uí Chennselaig expansion split the kindred. The result was that one Uí Bairrche branch persevered in the Barrow valley; and another was forced to move south towards the Wexford coast. 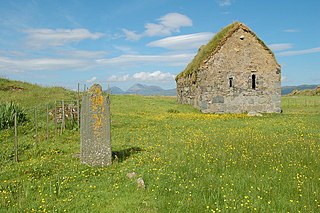 Abbán moccu Corbmaic, also Eibbán or Moabba, is a saint in Irish tradition. He was associated, first and foremost, with Mag Arnaide and with Cell Abbáin. His cult was, however, also connected to other churches elsewhere in Ireland, notably that of his alleged sister Gobnait.

Dubthach maccu Lugair, is a legendary Irish poet and lawyer who supposedly lived at the time of St Patrick's mission in Ireland and in the reign of Lóegaire mac Néill, high-king of Ireland, to which Dubthach served as Chief Poet and Brehon. In contrast to the king and his druids, he is said to have readily accepted the new religion. This event has played a major part in Hiberno-Latin and Irish sources as representing the integration of native Irish learning with the Christian faith.

Ibar mac Lugna, whose name is also given as Iberius or Ivor, was an early Irish saint, patron of Beggerin Island, and bishop. The saint is sometimes said to have been one of the "Quattuor sanctissimi Episcopi" said to have preceded Saint Patrick in Ireland, although possibly they were just contemporaries. His feast day is 23 April.