The Tiba (gazelle) is an Iranian car made by Saipa, that was unveiled in December 2008 as "Miniature". The car was originally named "Miniature", based on the "S81" platform. [1]

Price has been estimated to be less than 7,000 dollars. [2] The car platform has been designed by Saipa, and its safety is reasonable. In its production the services of some 122 local manufacturers have been utilized and about 810 parts have been produced. [3]

Based on a new platform, the new engine has been designed according to this specification: 4-cylinder 80 hp 1503cc engine and 5-speed manual transmission, which have been both modified in size and power by the German FEV company, with a fuel economy of 42MPG (5.6L/100 km) in highways and 33MPG in the cities. (7.2L/100 km) The car is also relatively well-equipped, with a CD Player, anti-theft technology, customizable seat position and front light angle, and automatic front windows. [7] Only 20% of all auto-parts used in the production of the Saipa Tiba cars are domestically manufactured. [8]

The car's safety features are reasonable and equipped with driver's and passenger's airbag and an ABS have been installed on base-models. Along with other accessories such as automatic rear windows, auto-climate control, aluminum rims, and a remote control can optionally be ordered during purchase. [9]

The Ford Festiva is a subcompact car that was marketed by Ford between 1986 and 2002. Festiva was sold in Japan, the Americas, and Australia. The name "Festiva" is derived from the Spanish word for "festive". It was not related to the similarly sized and named Ford Fiesta, and was not replaced by the Ford Ka, which is smaller.

The Volkswagen Corrado is a compact four passenger (2+2), three door, front engine, front wheel drive liftback coupe marketed by Volkswagen from 1988 to 1995, and manufactured by Karmann in Osnabrück, Germany.

The Ford Escape is a compact crossover vehicle sold by Ford since 2000 over four generations. 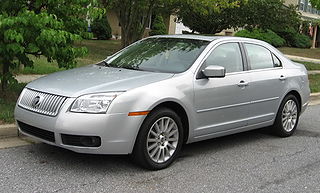 The Mercury Milan is a mid-size car that was marketed by the Mercury division of Ford Motor Company. Named after Milan, an Italian city, the Milan was sold across the 2006 to 2011 model years across a single generation. The smaller of two model lines developed to replace the Mercury Sable, indirectly succeeding the Mercury Mystique as the smallest Mercury sedan. 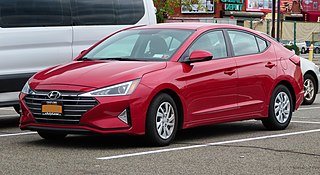 The Hyundai Elantra or Hyundai Avante, is a compact car produced by the South Korean manufacturer Hyundai since 1990.

SAIPA is an automaker headquartered in Tehran, Iran. The SAIPAC was established in 1965 as with 75% Iranian ownership, to assemble Citroëns under license for the Iranian market. It changed its name into SAIPA in 1975 when the Iranian state withdrew from the company. Its products in recent years were mostly under-licensed Korean cars and its own engine and range of cars. The chief executive of SAIPA is Javad Solaimani, predecessor of whom was Mohammadreza Soroush. The main subsidiaries of SAIPA Group are Saipa Diesel, Pars Khodro and Zamyad Co. SAIPA signed a Memorandum of Understanding with Malaysia's Proton to jointly develop a new compact sedan to replace the SAIPA Pride.

Iran’s automotive industry is the third most active industry of the country, after its oil and gas industry, accounting for 10% of Iran's GDP and 4% of the workforce.

The Ford Transit Connect is a compact panel van developed by Ford Europe. It is built on a dedicated commercial vehicle platform and shares parts with the Ford Focus. The first generation was designed by Peter Horbury and introduced in 2002 to replace the older Ford Escort and Fiesta-based Courier van ranges, which had ceased production in the same year. It has been imported to the North American market since the 2010 model year. In North America, the Transit Connect does not have a direct predecessor; the closest vehicle to its size was the standard-length Ford Aerostar cargo van, which ceased production in 1997.

The Toyota Highlander, also known as the Toyota Kluger, is a mid-size crossover SUV produced by Toyota. It is built on the same platform as used on the Camry. 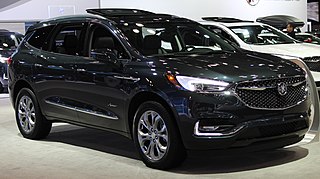 The Buick Enclave is a mid-size 3-row crossover SUV launched in 2008. The Enclave, the Saturn Outlook, the GMC Acadia, and Chevrolet Traverse all share the GM Lambda platform. The Enclave was previewed at the 2006 North American International Auto Show, officially as a concept car, making it the first Lambda vehicle to be displayed. The Enclave is partially based on the Buick Centieme concept shown at the 2003 Detroit Auto Show.

The Chevrolet Corvette (C6) is the sixth generation of the Corvette sports car that was produced by Chevrolet division of General Motors for the 2005 to 2013 model years. It is the first Corvette with exposed headlamps since the 1962 model. Production variants include the Z06, ZR1, Grand Sport, and 427 Convertible. Racing variants include the C6.R, an American Le Mans Series GT1 championship and 24 Hours of Le Mans GTE-Pro winner.

The Lincoln MKZ, is a four-door, five-passenger mid-size sedan manufactured by Ford and marketed as the Zephyr and as the MKZ by Ford's Lincoln brand — across two generations in both gasoline and hybrid gas/electric models. 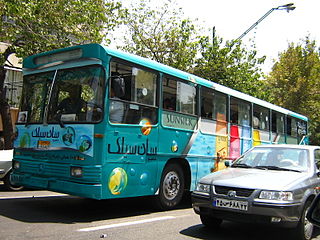 Environmental issues in Iran include, especially in urban areas, vehicle emissions, refinery operations, and industrial effluents which contribute to poor air quality. Most cars use leaded gas and lack emissions control equipment. Tehran is rated as one of the world's most polluted cities. However, buses and cars running on natural gas are planned to replace the existing public transportation fleet in the future. Also, energy prices are kept artificially low in Iran through heavy state subsidies, resulting in highly inefficient and polluting consumption patterns. Traffic management, vehicle inspection, general use of electric bicycles and electronic government are also part of the solution.

According to the Fourth Five-Year Economic Development Plan (2005–2010), the Privatisation Organisation of Iran affiliated with the Ministry of Economic Affairs and Finance is in charge of setting prices and ceding shares to the general public and on the Tehran Stock Exchange. The privatisation effort is primarily backed by reformist members of the Iranian government and society who hope that privatisation can bring about economic and social change. 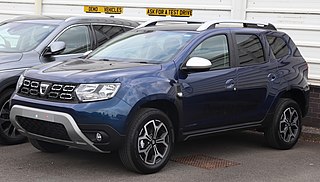 The Dacia Duster is a compact sport utility vehicle (SUV) produced and marketed jointly by the French manufacturer Renault and its Romanian subsidiary Dacia since 2010. It is currently in its second generation, launched in the autumn of 2017. It is marketed as the Renault Duster in certain markets such as India, Indonesia, Iran, Kazakhstan, Russia, Mexico, Nepal, Egypt, the Middle East, South Africa, Ukraine and South America. The first generation was rebadged and restyled as the Nissan Terrano in CIS countries and India. It is the third model of the Dacia brand based on the Logan platform, after the Sandero. 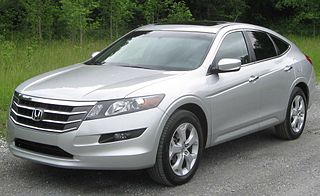 The Honda Crosstour is a mid-size wagon manufactured by Japanese automaker Honda. Sales began in November 2009 for the 2010 model year and were discontinued for the 2016 model year due to slow sales.

The Iran National Auto Loan was a short lived financial arrangement between the government of Hassan Rouhani Central Bank of the Islamic Republic of Iran, Iran Khodro, SAIPA and other Iranian car manufacturers who produced cars within the country.

The Daihatsu Mira e:S is a kei car manufactured by the Japanese automaker Daihatsu as the successor to the original Mira. It was previewed by the e:S concept car at the 2009 Tokyo Motor Show. The car was introduced to the Japanese market in September 2011. It was also sold by Toyota as the Toyota Pixis Epoch, which was released on 10 May 2012 and by Subaru as the Subaru Pleo Plus, which was released on 21 December 2012.