Microliths are found in large in numbers around Sawyerpuram (and additionally in Kulattur, Tirunelveli). They were found embedded in the fossil-bearing sand dunes. These available evidences in Sawyerpuram point the chronology of the Microlithic culture in South India to circa 4000 B.C. [1] [2]

Since the missionary Dr. G. U. Pope ministered in this place, the population is predominantly Christian.

Tamil culture is widely followed among the people living in Sawyerpuram whether they are Christians or Hindus.

The small town is known for peaceful environment and considered to be the cleanest small town in India with less population and the average life expectancy is 83.7 and which is higher than any small towns in India.

Sawyerpuram has 0% wind pollution 0% water pollution and less corrupted politics and well organized system, Sawyerpuram is known for its cleanliness and peaceful environment.

In summer the climate remains warm and on other seasons the climate can be cool and windy. This small town is also known for the cultivation of bananas and rice because of its red soil and jack fruit, star fruit, jambul fruit, pea nut, cucumber are also cultivated in few places around the town.

Aruppukottai is a town and a municipality in Virudhunagar district in the state of Tamil Nadu, India. Aruppukottai's classical name is "Sengattu Aravakotai". Aruppukottai is about 50 km from Madurai. It is in the middle of Madurai-Tuticorin National Highways NH-45B. The small villages and towns surrounding Aruppukottai are famous for production of jasmine. Aruppukottai is always famous for producing yarn. Sri Ramana Maharishi was born in Tiruchuli near Aruppukottai town. Aruppukottai was part of king Sethupathi of Ramnad. King Sethupathi has Zamin Palace in Palyampatti. Aruppukottai is well known for its high quality educational institutions. As of 2011, the town had a population of 97,722. After Madurai it is the only nearby city to have well built and maintained theaters. The town also hosts two famous temples – Arulmigu Amuthalingeshwarar Temple and Arulmigu Meenakshi Chokkanatha Swamy Temple on Thiruchuzhi Road. 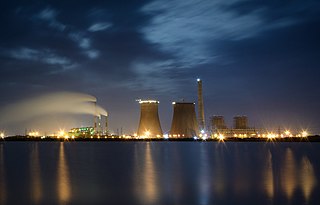 Thoothukudi, also known by its former name Tuticorin, is a port city, a municipal corporation and an industrial city in Thoothukudi district in the Indian state of Tamil Nadu. The city lies in the Coromandel Coast of Bay of Bengal. Thoothukudi is the capital and headquarters of Thoothukudi district. It is located about 590 kilometres southwest of Chennai, 190 kilometres northeast of Thiruvananthapuram and 580 kilometres southesst of Bengaluru. According to Confederation of Indian Industry, Thoothukudi has the second highest Human Development Index in Tamil Nadu next to Chennai. Thoothukudi City serves as the headquarters of Tamilnad Mercantile Bank Limited. Major educational establishments in the city include Government Thoothukudi Medical College, Fisheries College and Research Institute, Tamil Nadu Maritime Academy, V.O. Chidambaram College, Kamaraj College, Anna University and Government Polytechnic College. V. O. Chidambaranar Port Trust is one of the fastest growing Major Ports in India. Thoothukudi is an "Emerging Energy and Industrial hub of South India".

Tiruvallur is a Grade I municipality and a fast developing city in the Indian state of Tamil Nadu. It is located on the banks of Cooum river about 46 km (29 mi) from downtown Chennai (Madras) and just 5 km from megacity border, in the western part of the Chennai Metropolitan Area (CMA). It is the administrative headquarters of Tiruvallur district. The city has less dense population spread all over with large area.

Thoothukudi District is one of the 38 districts of Tamil Nadu state in southern India. The district was formed by bifurcation of Tirunelveli district on 20 October 1986. Thoothukudi is the capital and the main town of the district. The district is known for pearl cultivation, with an abundance of pearls being found in the seas offshore. It was formerly ruled by one of the oldest kingdoms in India, the Pandyan Dynasty with the port of Korkai through which trade with Rome happened. The archaeological site at Adichanallur holds the remains of the ancient Tamil civilisation. 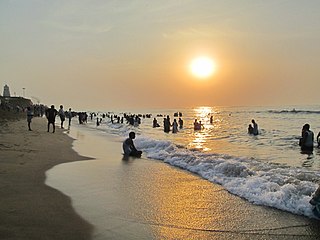 Ranni sometimes spelled Ranny, is a small village in the Pathanamthitta district of Kerala, in India. The taluk headquarters is a small township on both sides of the Pamba River. Ranni is also one of the largest taluks in Kerala. The renowned Hindu temple of Sabarimala is in this taluk, situated approximately 66 km from the main town, Ittiyappara. Ranni is known for its natural environment, forests, hills, river and good climate.

Sankarankovil is one of the largest municipality in the Tenkasi district, in the Indian state of Tamil Nadu. It was formerly called Sankaranayinarkoil (சங்கரநயினார்கோவில்). Sankarankovil is home to the Sankara Narayanar temple. 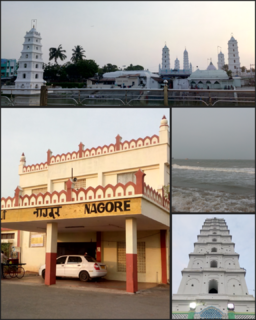 Nagore is a town in the Nagapattinam District, Tamil Nadu, India. It is located approximately 12 km south of Karaikal and 5 km north of Nagapattinam,Nearby towns are Karaikal, Tiruvarur, Mayiladuthurai. It has a population of approximately 45,000. Nagore is Famous For Tourism, The prime attraction is the renowned Nagore Dargah, a revered place of all faiths. A five centuries old Islamic shrine, Nagore Dargah attracts millions of pilgrims irrespective of caste, creed or religion. It is also famous for the lavish beaches found in the eastern part of the village and the delicious mouth-watering foods like Soondal, Vaada, Vadai, Bajji, sweet/ pepper flavoured corn. etc. The river that dissects Karaikal and Nagore have been a popular tourist attraction amongst the tourists. There are approximately 79% Muslims and 12% Hindus and 9% others. The Muslims in Nagore are usually very rich in GDP as most breadwinners work in other popular countries like Singapore, Dubai and France.

Authoor is a panchayat town in Thoothukudi district of the Indian state of Tamil Nadu.

Batlagundu is a town in Dindigul district in the Madurai Region state of Tamil Nadu, India. The name Vettrilaikkundru later transformed and changed to Vatthalagundu. The town is the major gateway to Kodaikanal. Subramaniya Siva was a writer, Indian Freedom Fighter, and activist born in Batlagundu. Batlagundu is the fifth-largest town in the Dindigul district. The town is located in such a way connecting three main districts of South Tamil Nadu. Batlagundu has most of the voters in Nilakottai Constituency.

Dharapuram is a town in Tirupur district in the Indian state of Tamil Nadu. Dharapuram is one of the oldest towns in Tamil Nadu and was the capital of Kongu Nadu under the Cheras, Western Ganga Dynasty and later Kongu Cholas, at which time it was known as Vanchipuri. Amaravathi River flows through the town. As of 2011, the town had a population of 67,007. Dharapuram Municipality is promoted 1st grade municipality on May 6, 1983 Dharapuram was Part of Coimbatore district in the beginning and later it moves to Erode district up to 2009. Dharapuram Town is situated along the banks of River Amaravathi, located in between 10 degree 45 minutes northern latitude and 77 degree 31 minutes eastern latitude with an extent of 7.02 km2. It is a small agricultural marketing centre for a large rural hinterland in the Tirupur District. The town is 47 km towards of the District Headquarters Tirupur, 75 km towards the Erode and 72 km towards the industrial town Coimbatore. The nearest airport is Coimbatore International Airport located 70 km from Dharapuram. Dharapuram was the capital of Noyyal South District before the formation of Coimbatore District.

Edappadi is one of the developing towns and a municipality in Salem district in the state of Tamil Nadu, India. Edappdi was once known for its thriving powerloom industry. The economy is diversified. The main modes of income are agriculture, lorry & heavy truck transport, granite, textile powerloom, entertainment and foundry. It is the second largest town in Salem Dt. next to Attur. The rocks around Edappadi are expected to contain rare minerals. The name is derived from a group of family names 'Edayar'. Now it is an ideal place for peaceful life and harmony synchronized with natural living. Water is supplied by the Cauvery river and 'Periya-yeri' (Big-lake) near Edappadi. It is surrounded by many lakes like, Periyayeri, ChettiYeri, Punka-yeri, Reddipatti-Yeri, Kavadikaranoor-Yeri(Aachampalli Yeri). It is an Ideal spot for Cinema shootings. As of 2011, the town had a population of 55,385.special for minister area. All ways are connected with supper road support.

Thisayanvilai is a panchayat town in Tirunelveli district in the Indian state of Tamil Nadu.

Mogappair is a residential neighborhood in north-western Chennai, India. It is located west of the Jawaharlal Nehru Road and is part of the Ambattur zone (7) of the Greater Chennai Corporation. There are industrial estates to the north and west, namely Padi and Ambattur.

Thalaiyuthu, also called Sankar Nagar, is a panchayat town in Tirunelveli district in the state of Tamil Nadu, India. It is located about 8 km north of Tirunelveli on the way to Madurai on highway NH 44.