The initiative is the result of conversations between Senator Stan Kutcher and Timothy Caulfield, who were discussing ways to counter misinformation about COVID-19. It is organized around the Canadian Association of Sciences Centres, COVID-19 Resources Canada and the University of Alberta's Health Law Institute. [1] [3]

The groups aims at disseminating information created by its members or selected from credible sources. Starting in March 2021, it also plans to track misinformation online and post science-based content to oppose it. [3] [4] In addition to recruiting athletes and celebrities, it's building a network of volunteers to increase the distribution of the selected information. [5] [6]

The initiative will be especially active against misinformation about COVID-19 vaccination, which threatens to have an impact on vaccination rates. [5] [7] Caulfield commented that the amount of disinformation circulating in the context of the COVID-19 pandemic in unlike anything experienced in decades. He hopes the campaign can get information to people looking online for reliable information. [4]

The campaign is active on Twitter, Facebook and Instagram. [4] It tries to apply best practices on fighting misinformation that were identified by various studies on science communication and public opinion. [4]

The National Vaccine Information Center (NVIC), founded under the name Dissatisifed Parents Together (DPT) in 1982, is an American 501(c)(3) organization that has been widely criticized as a leading source of fearmongering and misinformation about vaccines. While NVIC describes itself as the "oldest and largest consumer led organization advocating for the institution of vaccine safety and informed consent protections", it promotes false and misleading information including the discredited claim that vaccines cause autism, and its campaigns portray vaccination as risky, encouraging people to consider "alternatives."

Timothy Allen Caulfield is a Canadian professor of law at the University of Alberta, the Research Director of its Health Law Institute, and current Canada Research Chair in Health Law and Policy. He specializes in legal, policy and ethical issues in medical research and its commercialization. In addition to professional publications, he is the author of several books aimed at the general reader, the host of a television documentary series debunking pseudoscientific myths and is a fellow of the Committee for Skeptical Inquiry.

Heidi J. Larson is an anthropologist and the founding director of the Vaccine Confidence Project. Larson headed Global Immunisation Communication at UNICEF and she is the author of Stuck: How Vaccine Rumors Start and Why They Don't Go Away.

Children's Health Defense is an American 501c3 nonprofit advocacy organization, known for its anti-vaccine activism. Much of the material put forth by the organization involves misinformation on vaccines and anti-vaccine propaganda. It was founded and is chaired by Robert F. Kennedy Jr. Established under the name World Mercury Project in 2016, it has been campaigning against various public health programs, such as vaccination and fluoridation of drinking water. The group has been contributing to vaccine hesitancy in the United States, encouraging citizens and legislators to support anti-vaccine regulations and legislation. Arguments against vaccination are contradicted by overwhelming scientific consensus about the safety and effectiveness of vaccines.

Vaccine Choice Canada (VCC) is Canada's main anti-vaccination group. It was founded in the 1980s under the name Vaccination Risk Awareness Network (VRAN) and adopted its current name in 2014. The group has been contributing to vaccine hesitancy in Canada, encouraging citizens to forgo immunization and legislators to support anti-vaccine regulations and legislation. 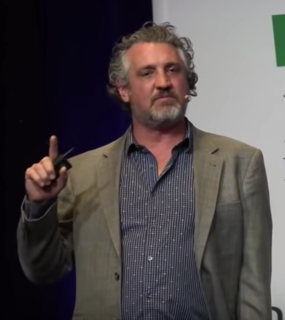 Del Matthew Bigtree is an American television and film producer as well as CEO of the anti-vaccination group Informed Consent Action Network. He produced the film Vaxxed: From Cover-Up to Catastrophe, based on the discredited views of Andrew Wakefield and alleges a connection between vaccines and autism.

The Informed Consent Action Network (ICAN) is one of the main anti-vaccination groups in the United States. Founded in 2016 by Del Bigtree, it spreads misinformation about the risks of vaccines and contributes to vaccine hesitancy, which has been identified by the World Health Organization as one of the top ten global health threats of 2019. Arguments against vaccination are contradicted by overwhelming scientific consensus about the safety and effectiveness of vaccines.

The COVID-19 pandemic has resulted in misinformation and conspiracy theories about the scale of the pandemic and the origin, prevention, diagnosis, and treatment of the disease. False information, including intentional disinformation, has been spread through social media, text messaging, and mass media. Journalists have been arrested for allegedly spreading fake news about the pandemic. It has also been propagated by celebrities, politicians, and other prominent public figures. A Cornell University study found that US President Donald Trump was "likely the largest driver" of the COVID-19 misinformation infodemic in English-language media.

The Stop Mandatory Vaccination website and associated Facebook group are some of the major hubs of the American anti-vaccination movement.

The COVID-19 pandemic was confirmed to have reached Seychelles in March 2020.

The COVID-19 pandemic was confirmed to have reached Tanzania in March 2020.

The COVID-19 pandemic in Ontario is an ongoing viral pandemic of coronavirus disease 2019 (COVID-19), a novel infectious disease caused by severe acute respiratory syndrome coronavirus 2 (SARS-CoV-2). The first confirmed case of COVID-19 in Canada was announced on January 25, 2020, involving a traveler who had recently returned to Toronto from travel in China, including Wuhan. As of November 10, 2020, Ontario has the second-largest number of confirmed COVID-19 cases among Canada's provinces and territories, behind only Quebec.

During a time of social distance and limited contact with others, social media became an important place to interact. Social media platforms are meant to connect people and helped the world remain connected, largely increasing usage during the pandemic. Since many people are asked to remain home, they have turned to social media to maintain their relationships and to access entertainment to pass the time.

Wikipedia experienced an increase in readership during the COVID-19 pandemic. Editors have worked to remove misinformation. As of April 2020, according to the newspaper Dawn, since reports of cases in Wuhan emerged in December 2019, Wikipedia editors have averaged 163 edits per hour. Across all Wikipedia languages, there are approximately 4,500 Wikipedia pages related to the pandemic, as of 23 April 2020. In November 2020 Wikipedia and the World Health Organization started a joint venture in an effort to combat false information, with the WHO allowing free use of its published information, graphics and videos.

Plandemic is a pair of 2020 conspiracy theory videos produced by Mikki Willis which promote misinformation about the COVID-19 pandemic. They feature Judy Mikovits, a discredited former researcher who has been described as an anti-vaccine activist despite her denial. Other people are featured on the second video, Plandemic: Indoctornation, which was released 3 months after the first video. Other than COVID-19 subjects, it also talks about viruses in general, as well as Mikovits herself.

Verified is a United Nations project to improve access to accurate information. 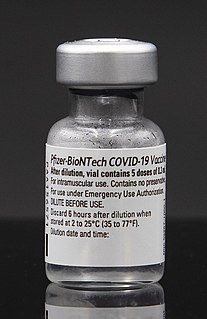 The Pfizer–BioNTech COVID‑19 vaccine, codenamed BNT162b2 and sold under the brand name Comirnaty, is a COVID-19 vaccine developed by BioNTech in cooperation with Pfizer. It is both the first COVID-19 vaccine to be authorized by a stringent regulatory authority for emergency use and the first cleared for regular use. The vaccine contains the active ingredient tozinameran.

The COVID-19 vaccination campaign in Bulgaria began on 27 December 2020, in line with most other countries in the EU. It is in response to the ongoing pandemic in Bulgaria. As of 11 January 2021, 13,473 people have been vaccinated.

As of 27 January 2021, 71.6 million COVID‑19 vaccine doses had been administered worldwide based on official reports from national health agencies.