The Science Society of China (simplified Chinese :中国科学社; traditional Chinese :中國科學社, 1915-1960) was a major science organization in the modern history of China. It was initiated by Chinese students at Cornell University in 1914, including P.C. King, H. C. Zen, Zhou Ren, Hsingfo Yang and later renamed Science Society of China. In 1915 it began publication in China of a major journal, Kexue (Science), which was patterned on the journal of the American Association for the Advancement of Science. In 1918 Science Society of China founded headquarters in Nanjing. In 1922 the Society established a major biological research laboratory in Nanjing. The Society devoted itself to the popularization of science, the improvement of science education, the standardization in Chinese translation of scientific vocabularies, and participation in international scientific meetings. It was the leading scientific organization in China prior to the establishment of government-sponsored Academia Sinica (1928) and Chinese Academy of Sciences (1949). [1] [2]

The Chinese Academy of Social Sciences (CASS), is a Chinese research institute and think tank. The institution is the premier comprehensive national academic research organization in the People's Republic of China for the study in the fields of philosophy and social sciences, with the obligation of advancing and innovating in the scientific research of philosophy, social sciences and policies. It was described by Foreign Policy magazine as the top think tank in Asia. CASS is under the auspices of the State Council of the People's Republic of China.

A metal leaf, also called composition leaf or schlagmetal, is a thin foil used for gilding and other forms of decoration. Metal leaves can come in many different shades. Some metal leaves may look like gold leaf but do not contain any real gold. This type of metal leaf is often referred to as imitation leaf.

Zheng Ji also known as Libin T. Cheng, was a Chinese nutritionist and a pioneering biochemist. He was reputed to be the world's oldest professor and the founder of modern nutrition science in China, having lived to the age of 110.

Guangzhou Institutes of Biomedicine and Health (GIBH), affiliated with the Chinese Academy of Sciences, is a government-sponsored scientific research institution with independent legal jurisdiction. GIBH was established by the Chinese Academy of Sciences, Guangdong Provincial Government and Guangzhou Municipal Government. The managerial mechanism of GIBH is the responsibility of Director-General, under the authority of the board of trustees.

Nanjing University, colloquially known as Nanda, is a leading public research university in Nanjing, Jiangsu. It is a member of the elite C9 League of Chinese universities and a Class A Double First Class University designated by the Chinese central government. NJU has two main campuses: the Xianlin campus in the northeast of Nanjing, and the Gulou campus in the city center of Nanjing.

Wenying Zhuang is a Chinese mycologist. She is known for her contributions to the study of species diversity and phylogeny of Ascomycetes.

Du Xinyuan (1905–1985) birth name Du Chunren, was a People's Republic of China politician. He was born in Wutai County, Xinzhou, Shanxi Province. He joined the Communist Party of China in 1927, while studying at Beijing Normal University. He was CPPCC Committee Chairman of Sichuan Province. He was a delegate to the 4th, 5th and 6th National People's Congress.

Meng Anming is a Chinese developmental biologist. In 1983 he graduated from Southwest Agricultural University, and in November 1990 he received his PhD from the Genetics Department of the University of Nottingham. From 1990 to 1998 he served as an associate professor of Beijing Agricultural University, and from 1998 a professor of Tsinghua University. In 2007 he was elected a member of Chinese Academy of Sciences, and in 2008 a member of TWAS. In 2001 he was awarded the Ho Leung Ho Lee Foundation Prize for Scientific and Technologic Progress.

Platynosomum capranum is a species of trematodes found mainly in Kunming, Mainland China. It is the 4th species of Platynosomum found to be parasitic of mammals and the first species in this genus recorded from China.

An Zhisheng is a Chinese geographer and politician who specializes in quaternary geology, air particle pollution control, and global change. He is internationally known for his studies on Chinese loess and its implication for paleo-climate and paleo-environment changes. He is a member of the Chinese Academy of Sciences and The World Academy of Sciences (TWAS), and Foreign Associate of the National Academy of Sciences. He is a researcher and doctoral supervisor of the Institute of Earth Environment, Chinese Academy of Sciences. He is a member of the Communist Party of China. He is an editor of Quaternary Science Reviews. He served as the Vice Chairman of International Union for Quaternary Research (INQUA) from 1999 to 2007, and the Vice Chair of International Geosphere-Biosphere Programme (IGBP) steering committee from 2003 to 2006.

Moellendorffia is a gastropod mollusc genus of the family Camaenidae. Members of this genus appear only in East Asia, spanning north from Japan, Mainland China, Hong Kong, Vietnam and Indonesia. 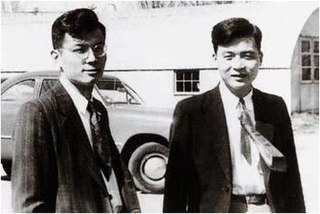 Hong Chaosheng was a Chinese physicist best known for studying cryogenics. Hong was the teacher of Zhao Zhongxian, a laureate of Highest Science and Technology Award, the highest scientific award issued by the Chinese Academy of Sciences to scientists working in China.

Ye Tan is a Chinese economist and a research professor at the Institute of Economics of the Chinese Academy of Social Sciences since 1988. In 2012, she was appointed as an adjunct professor at Peking University School of Economics. She is a member of the NSFC peer councillor, member of the 19th-century Japanese Society for Economic and Social Studies, and vice president of the Chinese Association of historic Economic Thought. She is the director of the Academy of History of Chinese Economic Thought. 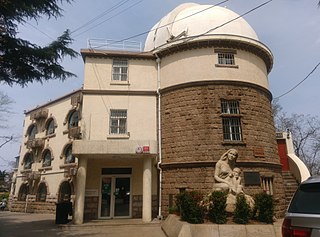 The Qingdao Observatory is located on the summit of Guanxiang Mountain in the Shinan District of Qingdao, China. The existing building complex was originally built in 1905. Qingdao Observatory was once an important scientific research institute in Qingdao, and also played an important role in the development of modern meteorology and marine science in China. Together with Shanghai Xujiahui Observatory and Hong Kong Observatory, they once were known as the "Three Observatory in the Far East". Qingdao Observatory has been listed as "Meteorology Observation Dome" amongst the "Top Ten Scenic Spots in Qingdao". Its building complex now belongs to the North Sea Fleet of the PLA Navy and the Zijinshan Observatory of the Chinese Academy of Sciences, and is part of the Qingdao German Building Complex, a national key cultural relics conservation site.

Jin Hongguang is a Chinese physical chemist, fellow of the Chinese Academy of Sciences.

Hou Youtang was a Chinese stratigraphic paleontologist and ostracodologist and a member of the Chinese Communist Party. She was a pioneer in micropaleontology research in China and the first Chinese scholar to work on Ostracoda fossils. She is also noted for her major contributions to the oil and gas industry in China.