Selection is the act of choosing and acquiring a subdivided tract of land for farming purposes in Australia. A selection is also descriptive of the plot of land that was selected. The term derived from "free selection before survey" of crown land in some Australian colonies under land legislation introduced in the 1860s. These acts were intended to encourage closer settlement, based on intensive agriculture, such as wheat-growing, rather than extensive agriculture, such as wool production. Selectors often came into conflict with squatters, who already occupied the land and often managed to circumvent the law.

The Robertson Land Acts allowed those with limited means to acquire land. With the stated intention of encouraging closer settlement and fairer allocation of land by allowing 'free selection before survey', the Land Acts legislation was passed in 1861. The relevant acts were named the Crown Lands Alienation Act and Crown Lands Occupation Act. The application of the legislation was delayed until 1866 in inland areas such as the Riverina where existing squatting leases were still to run their course. In any case severe drought in the Riverina in the late 1860s initially discouraged selection in areas except those close to established townships. Selection activity increased with more favourable seasons in the early 1870s.

Both selectors and squatters used the broad framework of the Land Acts to maximise their advantages in the ensuing scramble for land. There was a general manipulation of the system by squatters, selectors and profiteers alike. The legislation secured access to the squatter's land for the selector, but thereafter effectively left him to fend for himself. Amendments passed in 1875 sought to remedy some of the abuses perpetrated under the original selection legislation.

However discontent was rife and a political shift in the early 1880s saw the setting up of a commission to inquire into the effects of the land legislation. The Morris and Ranken committee of inquiry, which reported in 1883, found that the number of homesteads established was a small percentage of the applications for selections under the Act, especially in areas of low rainfall such as the Riverina and the lower Darling River. The greater number of selections were made by squatters or their agents, or by selectors unable to establish themselves or who sought to gain by re-sale. The gaining of lands through agents—often old people who willed the land to the squatter—was known as dummying. [1] The Crown Lands Act of 1884, introduced in the wake of the Morris-Ranken inquiry, sought to compromise between the integrity of the large pastoral leaseholds and the political requirements of equality of land availability and closer settlement patterns. The Act divided pastoral runs into Leasehold Areas (held under short-term leases) and Resumed Areas (available for settlement as smaller homestead leases) and allowed for the establishment of local Land Boards. [2]

The process of land selection in Queensland began in 1860 and continued under a series of land acts in subsequent years. Land was considered the colony's greatest asset. Prosperity of the colony was measured according to the extent of land settlement. Rent from land leases was the colony's largest revenue earner. The initial political contest was between pastoralists and selectors led by the "town liberals" who desired that immigrants have an equitable right to small land holdings. Closer settlement for agricultural purposes was promoted by the Queensland Government who desired settlement by immigrants to Queensland and exports of agricultural produce and raw materials such as cotton and wool to Britain. No group (pastoralists or town liberals) held a dominant control over land policy. Legislation was framed with the aim of a comprehensive land policy but was changed following the efforts by both groups to interfere in areas of occupancy conditions and priority for selection, and there was tension between free selection and long leases particularly for pastoral class land. Consequently, there were over 50 principal and amending acts covering all land legislation up to 1910. [3]

In South Australia Premier Henry Strangways passed the Strangways Land Act in January 1869 despite conflict with pastoralists, which provided for the creation of agricultural areas and credit purchases of up to 640 acres (259 ha), with a down payment of 25 per cent and four years to pay. [4]

The Victorian Parliament passed Land Acts in 1860, 1862 [6] and 1869, [7] which offered settlers land within defined agricultural areas. Settlers paid for half of an allotment on selection at a uniform price of £1 per acre and paid rent on the other half for usually 7 years. By the end of the period, to obtain title to the land, settlers would have had to pay the balance of the purchase price and make certain improvements. [8]

Steele Rudd (Arthur Davis) wrote a series of comic novels on rural life, starting with On Our Selection (1899), about Dad, Mother and Dave Rudd of Snake Gully. The Rudds had four (or six) acres in Darling Downs, Queensland. The novels were made into films and a radio series.

Peter Carey's book True History of the Kelly Gang (2000), roughly based on the story of Ned Kelly, has its beginning in rural Victoria. The Duffy Land Act of 1862 is mentioned.

A pastoral lease, sometimes called a pastoral run, is an arrangement used in both Australia and New Zealand where government-owned Crown land is leased out to graziers for the purpose of livestock grazing on rangelands.

Sir John Robertson, was a London-born Australian politician and Premier of New South Wales on five occasions. Robertson is best remembered for land reform and in particular the Robertson Land Acts of 1861, which sought to open up the selection of Crown land and break the monopoly of the squatters.

The Crown Lands Acts 1861 (NSW) were introduced by the New South Wales Premier, John Robertson, in 1861 to reform land holdings in New South Wales and in particular to break the Squattocracy's domination of land tenure. The Acts allowed free selection of crown land and made redundant the limits of location, which limited sale of land to the Nineteen Counties which had applied since 1826.

Graman is a small village nestled on the banks of Graman Creek, 40 km northwest of Inverell and 25 km from Ashford in Inverell Shire, New South Wales, Australia. The village is situated on the Inverell to Yetman road at elevation of about 606 metres. Graman is in Arrawatta County. At the 2016 census, it recorded a population of 103 people. 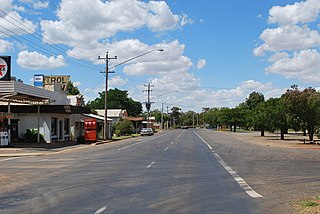 Squatting is a historical Australian term that referred to someone who occupied a large tract of Crown land in order to graze livestock. Initially often having no legal rights to the land, squatters became recognised by the colonial government as owning the land by being the first European settlers in the area. Eventually, the term "squattocracy", a play on "aristocracy", came into usage to refer to squatters and the social and political power they possessed.

A homestead is an isolated dwelling, especially a farmhouse, and adjacent outbuildings, typically on a large agricultural holding such as a ranch or station.

Cuppacumbalong is an historic homestead located near the southern outskirts of Canberra in the Australian Capital Territory. It is also the name of a former 4,000-acre (16 km2) sheep and cattle grazing property that surrounded the homestead near the junction of the Murrumbidgee and Gudgenby Rivers. The word Cuppacumbalong is Aboriginal in origin and means 'meeting of the waters'. One of the property's early owners Leopold Fane De Salis made a noteworthy contribution to political life during colonial times and furthermore, Cuppacumbalong has strong connections to the life of William Farrer, the father of the Australian wheat industry.

On Our Selection (1899) is a series of stories written by Australian author Steele Rudd, the pen name of Arthur Hoey Davis, in the late 1890s, featuring the characters Dad and Dave Rudd.

Lemontree is a rural locality in the Toowoomba Region, Queensland, Australia. In the 2016 census, Lemontree had a population of 45 people.

Fassifern Homestead is a heritage-listed homestead at 1008B Boonah-Fassifern Road, Kalbar, Scenic Rim Region, Queensland, Australia. It was built circa 1880. It was added to the Queensland Heritage Register on 13 November 2008.

Peter Fitzallan MacDonald was a Member of the Queensland Legislative Assembly.

Braeside Homestead is a heritage-listed homestead at Crystal Mount Road, Dalveen, Southern Downs Region, Queensland, Australia. It was built from 1870s to 1920s. It was added to the Queensland Heritage Register on 23 August 2002. 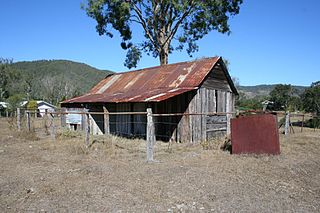 The Selector's Hut is a heritage-listed hut at 20 Upper Camp Mountain Road, Camp Mountain, Moreton Bay Region, Queensland, Australia. It is also known as Marks' Hut. It was built c. 1870 by George Atthow. It was added to the Queensland Heritage Register on 3 December 2007. 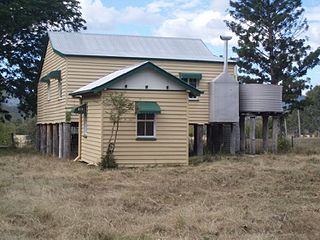 Soldier Settler House is a heritage-listed homestead at Gladstone-Monto Road, Ubobo, Gladstone Region, Queensland, Australia. It was built in 1920. It is also known as Hecstanvale. It was added to the Queensland Heritage Register on 28 September 2001.

The Strangways Land Act, Strangways Act or Waste Lands Amendment Act, were common names for legislation enacted in January 1869 in the colony of South Australia, formally titled An Act to further amend the "Waste Lands Act" 1869. The Act enabled the purchase of land for farmers, allowing for closer settlement in areas of the province suited to more intensive agriculture, rather than vast pastoral runs on uncleared land leased from the government. It is named for Henry Strangways, who was premier and attorney-general when the legislation was passed, and had previously been the Minister for Crown Lands.

The process of land selectionin Queensland in Australia began in 1860 and continued under a series of land acts in subsequent years. When Britain claimed possession of Australia, it did so on the basis of terra nullius and did not acknowledge that Indigenous people had any ownership over the land. All land in Australia became Crown land and was sold or leased by the Australian colonial governments according to the needs of the colonists.

Ranken is a locality in the Northern Territory of Australia located in the territory's east adjoining the border with the state of Queensland about 1,098 kilometres (682 mi) south-east of the territory capital of Darwin.