Sequenza (Italian for "sequence") is the name borne by fourteen compositions for solo instruments or voice by Luciano Berio. [1] The pieces, some of which call for extended techniques, are: 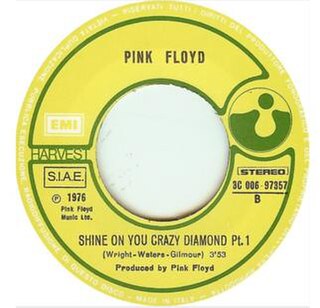 "Shine On You Crazy Diamond" is a nine-part Pink Floyd composition written by David Gilmour, Roger Waters, and Richard Wright. It appeared on Pink Floyd's 1975 concept album Wish You Were Here. The song is written about and dedicated to Syd Barrett, who left the band in 1968 due to deteriorating mental health. 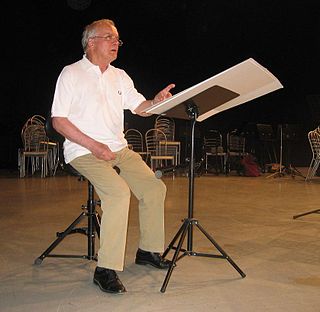 Sequenza XI for solo guitar (1987–1988) is one of a series of Sequenzas by Luciano Berio. Written for the American guitarist Eliot Fisk, it is an innovative investigation into the dramatic and virtuosic possibilities of musical performance.

Péchés de vieillesse is a collection of 150 vocal, chamber and solo piano pieces by composer Gioachino Rossini, who was best known for his operas. The pieces are grouped into fourteen unpublished albums under this self-deprecating and ironic title. The ordering of the pieces in the albums does not reflect the sequence or the dates of their composition, which range from 1857 to shortly before Rossini's death in 1868. The title Péchés de vieillesse was given by Rossini only to volumes V to IX but has been applied to all. The collection is salon music, though of a refined order, meant to be performed in the privacy of Rossini's drawing room at Passy. Volumes I, II, III and XI are vocal music to piano accompaniment. Volumes IV, V, VI, VII, VIII, X and XII are music for solo piano. Volume IX is for chamber ensemble or solo piano. Volumes XIII and XIV comprise vocal and non-vocal music.

Sequenza II is a composition for unaccompanied harp by the Italian composer Luciano Berio. Written for and premiered by the French harpist Francis Pierre in 1963, it has since been performed and recorded by Emily Laurance, Frédérique Cambreling, Susan Jolles, and Claudia Antonelli, among others.

Sequenza IV for solo piano is the fourth in a series of solo Sequenze by Luciano Berio that started with the publication of Sequenza I for solo flute.

Sequenza X is a composition for trumpet and piano by Luciano Berio, the tenth in his series of pieces with this title. The work was commissioned by the Los Angeles Philharmonic for Thomas Stevens, and premiered by him on November 19, 1984. The piece is dedicated to Ernest Fleischmann, managing director of the Los Angeles Philharmonic from 1969 to 1997, who convinced Berio to write a Sequenza for trumpet, despite years of resistance to the idea. Stevens received the music only nine days before the premiere.

Delphi 2&3, Solo Piano Improvisations is a double album recorded by Chick Corea and released in 1980.

Sequenza VI is a composition for solo viola by Luciano Berio, part of his series of fourteen Sequenze.

Sequenza VII is a composition for solo oboe by Luciano Berio, the seventh of his fourteen Sequenze. The sequenza calls for extended technique. In 1975, Berio used Sequenza VII as part of Chemins IV, which included an orchestra of eleven string instruments. In 1993, Claude Delangle adapted the work for soprano saxophone, naming the revised work Sequenza VIIb.