Seventeen is a lost [1] 1916 American comedy silent film directed by Robert G. Vignola and written by Booth Tarkington and Harvey F. Thew. It is based on Tarkington's novel of the same name which was published earlier the same year. The film stars Louise Huff, Jack Pickford, Winifred Allen, Madge Evans, Walter Hiers, and Dick Lee. The film was released on November 2, 1916 by Paramount Pictures. [2] [3] 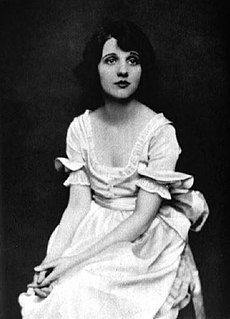 Louise Huff was an American actress of the silent film era. 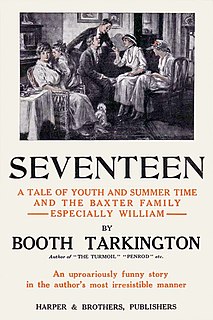 Seventeen: A Tale of Youth and Summer Time and the Baxter Family Especially William is a humorous novel by Booth Tarkington that gently satirizes first love, in the person of a callow 17-year-old, William Sylvanus Baxter. Seventeen takes place in a small city in the Midwestern United States shortly before World War I. It was published as sketches in the Metropolitan Magazine in 1915 and 1916, and collected in a single volume by Harper and Brothers in 1916, when it was the bestselling novel in the United States.

A Feud in the Kentucky Hills is a 1912 American silent drama film directed by D. W. Griffith. The film, by the Biograph Company, was shot on the Hudson Palisades near Fort Lee, New Jersey when many early film studios in America's first motion picture industry were based there at the beginning of the 20th century. Additional filming took place in and around the Pike County town of Milford, Pennsylvania. 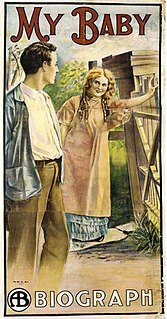 Great Expectations is a lost 1917 silent drama film directed by Robert G. Vignola and Paul West, based on the 1861 novel Great Expectations by Charles Dickens. Jack Pickford stars as Pip and Louise Huff as Estella.

Caprice is a 1913 silent film produced by Daniel Frohman and Adolph Zukor released by Famous Players Film Company and starring Mary Pickford. J. Searle Dawley directed. Though Zukor helped finance the film it was distributed on a 'State's Rights' arrangement primarily since no Paramount Pictures had yet to exist. The story of this film had been acted on the stage by a young Minnie Maddern Fiske in the 1880s, one of her earliest successes as an adult actress. The same story gives Pickford the chance to arise to the height of a fine actress instead of just merely a popular performer. This film is lost.

The Love Route is a 1915 American Western silent film directed and written by Allan Dwan based upon a play by Edward Peple. The film stars Harold Lockwood, Winifred Kingston, Donald Crisp, Jack Pickford, Dick La Reno, and Juanita Hansen. The film was released on February 25, 1915, by Paramount Pictures. 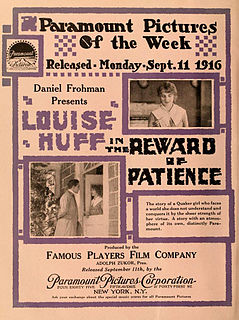 The Ghost House is a 1917 American silent comedy film directed by William C. deMille and written by Beulah Marie Dix. The film stars Jack Pickford, Louise Huff, Olga Grey, James Neill, Eugene Pallette, and Horace B. Carpenter. The film was released on October 1, 1917, by Paramount Pictures. It is not known whether the film currently survives, which suggests that it is a lost film. 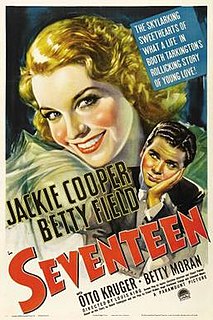 Seventeen is a 1940 American comedy film based upon the novel of the same name by Booth Tarkington and the subsequent play written by Stannard Mears, Hugh Stanislaus Stange and Stuart Walker. Directed by Louis King, the film stars Jackie Cooper, Betty Field, Otto Kruger, Ann Shoemaker, Norma Gene Nelson and Betty Moran. It was released on March 1, 1940, by Paramount Pictures. 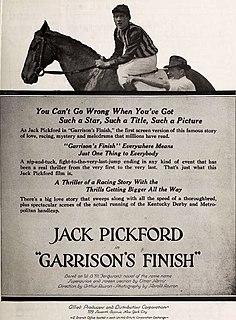 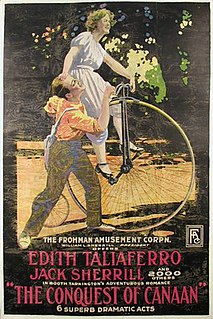 The Conquest of Canaan is a 1916 American silent drama film directed by George Irving and starring Edith Taliaferro, Jack Sherrill and Ralph Delmore. It was based on the novel by Booth Tarkington which was subsequently remade as a 1921 film of the same title.