Shapiro-Glickenhaus Entertainment was a company formed at the height of the home video industry in 1984 by producer Leonard Shapiro and director James Glickenhaus to produce and distribute low-budget horror and action films.

The company known also as SGE or Shapiro Entertainment during the company's earlier years, and whose video unit was known as SGE Home Video would produce 14 films and distribute more than 100 pick-up films in its 12 years of operation. While Shapiro Entertainment was founded, it signed a deal to distribute Bill Wyman Presents, a two-hour music video movie. [1] SGE's home video titles were distributed by the Video Sales Organization (VSO) until 1991 when MCA/Universal began to distribute the SGE catalog. [2] The company, at one time, owned a television syndication division, SGE Television, to handle television sales of the catalog, to be headed by Sy Shapiro. [3] On February 17, 1991, SouthGate Entertainment and SGE had to negotiate plans about planning on to merge their video distribution links. [4] Both suppliers combined their sales offices in March 1991, and decided to maximize their potential and increase their market share. [5] On February 24, 1991, SGE announced they would scrap production of smaller budget films in favor of producing a single big-budget film. [6] The Video Sales Organization, a joint venture between SGE and SouthGate went into dissolution on October 12, 1991, due to a lack of hotter titles. [7]

As the home video industry evolved in the mid-1990s, SGE disbanded in 1995. Leonard Shapiro left the company in 1996 to form Rootbeer Films Inc. while James Glickenhaus would join a finance firm started by his father, Glickenhaus & Co.

In 1996, Allan M. Solomon, who served as executive vice president of SGE, along with Elliot Solomon, founded Amsell Entertainment, which bought the remaining assets and film catalog of SGE. Synapse Films, under license from North American Pictures, LLC, acquired the rights to some SGE film titles and scheduled the releases of Frankenhooker and Maniac Cop on Blu-ray in Fall of 2011, as well as Red Scorpion in Summer of 2012 and a new DVD of Basket Case 3: The Progeny in fall 2012. [8] Synapse has also acquired the rights to release a new Blu-ray of McBain . Blu-Rays of Basket Case 2 and Basket Case 3: The Progeny have been released by Synapse as well.

Although SGE would never create a breakout or blockbuster film, cult film fans may recognize some of SGE's works. Films such as Basket Case 2 , Frankenhooker , Maniac Cop , Moontrap , McBain , and Red Scorpion were released theatrically and often found a wider audience when released on home video and on cable television. Maniac Cop and Red Scorpion proved successful in the video era, each spawning sequels while SGE also launched a third Basket Case film, Basket Case 3. Red Scorpion was SGE's most widely released theatrical feature on 1,268 screens in the U.S. and bringing in over $4 million at the box office. [10]

The company's final film, Timemaster, released in 1995, was directed and written by James Glickenhaus and starred his son, Jesse Cameron-Glickenhaus.

Though Red Scorpion was the distributor's most widely released theatrical film, it was also its most controversial. The Jack Abramoff produced feature was dropped by Warner Bros. when protest groups claimed that the involvement of the South African government in the film's creation violated the United Nations cultural boycott against the Pretoria government. The tumult hadn't died down when the film was picked up by SGE and released in April 1989. Five protest groups picketed at the film's opening weekend in Washington, D.C. [11] Protesters carried placards that read "Red Scorpion No! Freedom Yes!" and shouting "Red Scorpion is no good. Send it back to Pretoria!"

Less than a year later, controversy also surrounded SGE's feature film Frankenhooker, one of the last films to receive an X rating from the Motion Picture Association of America The company appealed twice with two editorial changes and could not persuade the MPAA to drop the X-rating to an R-rating. As a result, SGE released the film in 1990 with a self-attached "A" label. [12] 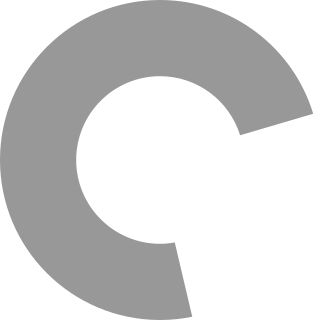 The Criterion Collection, Inc. is an American home-video distribution company that focuses on licensing, restoring and distributing "important classic and contemporary films." Criterion serves film and media scholars, cinephiles and public and academic libraries. Criterion has helped to standardize certain aspects of home-video releases such as film restoration, the letterboxing format for widescreen films and the inclusion of bonus features such as scholarly essays and commentary tracks. Criterion has produced and distributed more than 1,000 special editions of its films in VHS, Betamax, LaserDisc, DVD, Blu-ray and Ultra HD Blu-ray formats and box sets. These films and their special features are also available via an online streaming service that the company operates.

The Protector is a 1985 Hong Kong-American action film directed by James Glickenhaus and starring Jackie Chan, Danny Aiello and Roy Chiao. It was Chan's second attempt at breaking into the American film market, after 1980 film The Big Brawl, which had moderate box office success but was considered a disappointment. Conflicts between Glickenhaus and Chan during production led to two official versions of the film: Glickenhaus' original version for American audiences and a Hong Kong version re-edited by Jackie Chan. The original Glickenhaus version was a box office failure in North America, while Chan's edited version was a moderate success in Asia. Chan later directed Police Story (1985) as a response to this film.

Red Scorpion is a 1988 American action film starring Dolph Lundgren and directed by Joseph Zito. Lundgren appears as a Soviet special forces operative sent to assassinate an anti-communist rebel leader in Africa, only to side with the rebels. It was produced by lobbyist Jack Abramoff and controversially filmed in South West Africa with the support of apartheid-era South Africa. The film was released in the United States on April 21, 1989. It is the first installment in the Red Scorpion film series. 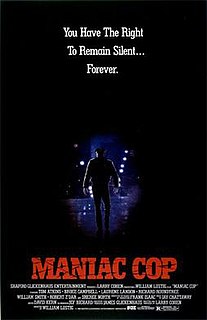 Maniac Cop is a 1988 American action slasher film directed by William Lustig, written by Larry Cohen, and starring Tom Atkins, Bruce Campbell, Laurene Landon, Richard Roundtree, William Smith, Robert Z'Dar, and Sheree North. Z'Dar plays the title character, a murderous ex-police officer returned from the dead, and seeks revenge on the people who wronged him. It is the first installment in the Maniac Cop film series. 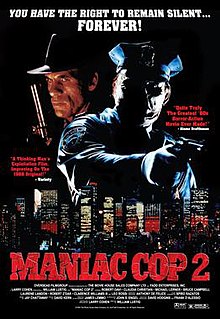 Maniac Cop 2 is a 1990 American action slasher film directed by William Lustig and written by Larry Cohen. It is the second installment in the Maniac Cop film series. It stars Robert Davi, Claudia Christian, Michael Lerner, and Bruce Campbell, with Robert Z'Dar returning as Matthew Cordell, an undead police officer-turned-serial killer following his own murder. 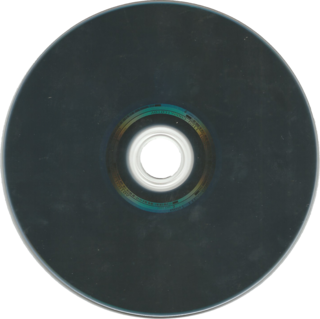 Glickenhaus may refer to: