Sheila Meiring Fugard (born 1932) was born in England. She is a writer of short stories and plays and the ex-wife of South African playwright Athol Fugard.

Born in Birmingham, England in 1932, Sheila Meiring moved with her parents to South Africa, in 1940, when she was eight years old. She went to the University of Cape Town, where she wrote short stories and studied theatre.

She met playwright Athol Fugard when she acted in one of his plays. In September 1956, she married Fugard and adopted his surname. [1]

In 1972, when she was 40 years old, Sheila Fugard published her first novel, The Castaways, which won the Olive Schreiner Prize. Subsequently, she published other novels, including Rite of Passage, in 1976, and A Revolutionary Woman, in 1983. A Revolutionary Woman, her best-known novel, takes place in the 1920s in the Karoo district of South Africa and tells the story of a female disciple of Mahatma Gandhi who gets entangled in a rape case between a young colored boy and a young retarded Boer girl. Rite of Passage concerns a doctor and a young boy traumatized by a tribal circumcision ceremony.

Fugard has also published collected poems, including Threshold, in 1975, and Mystic Things, in 1981.

Athol Fugard acted in the BBC adaptation of her novel The Castaways. Their daughter, Lisa Fugard, who has acted in some of her father's plays, such as My Children! My Africa!, has also written a novel.

"Master Harold"...and the boys is a play by Athol Fugard. Set in 1950, it was first produced at the Yale Repertory Theatre in March 1982 and made its premiere on Broadway on 4 May at the Lyceum Theatre, where it ran for 344 performances. The play takes place in South Africa during apartheid era, and depicts how institutionalized racism, bigotry or hatred can become absorbed by those who live under it. It is said to be a semi-autobiographical play, as Athol Fugard's birth name was Harold and his boyhood was very similar to Hally's, including his father being disabled, and his mother running a tea shop to support the family. His relationship with his family's servants was also similar to Hally's, as he sometimes considered them his friends, but other times treated them like subservient help, insisting that he be called "Master Harold", and once spitting in the face of one he had been close to.

Harold Athol Lanigan Fugard OIS is a South African playwright, novelist, actor, and director who writes in South African English. He is best known for his political plays opposing the system of apartheid and for the 2005 Oscar-winning film of his novel Tsotsi, directed by Gavin Hood. Fugard was an adjunct professor of playwriting, acting and directing in the Department of Theatre and Dance at the University of California, San Diego. For the academic year 2000–2001, he was the IU Class of 1963 Wells Scholar Professor at Indiana University, in Bloomington, Indiana. He is the recipient of many awards, honours, and honorary degrees, including the 2005 Order of Ikhamanga in Silver "for his excellent contribution and achievements in the theatre" from the government of South Africa. He is also an Honorary Fellow of the Royal Society of Literature.

Eileen Arbuthnot Robertson was an English novelist, critic and broadcaster. Her 1931 novel Four Frightened People gave rise to a film of the same name in 1934.

Yvonne Bryceland was a South African stage actress. Some of her best-known work was in the plays of Athol Fugard.

Lisa Fugard is a South African writer and actor. She was born in Port Elizabeth, South Africa, the only child of playwright Athol Fugard and novelist Sheila Meiring Fugard.

Blood Knot is an early play by South African playwright, actor, and director Athol Fugard. Its single-performance premier was in 1961 in Johannesburg, South Africa, with the playwright and Zakes Mokae playing the brothers Morris and Zachariah.

Fugard is a surname. Notable people with the surname include:

Paul Slabolepszy, or Paul "Slab", is a South African actor and playwright.

Boesman and Lena is a small-cast play by South African playwright Athol Fugard, set in the Swartkops mudflats outside of Port Elizabeth in the Eastern Cape, that shows the effect of apartheid on a few individuals, featuring as characters a "Coloured" man and woman walking from one shanty town to another.

The Road to Mecca is a play by South African playwright Athol Fugard. It was inspired by the story of Helen Martins, who lived in Nieu-Bethesda, Eastern Cape, South Africa and created The Owl House, which is now a National heritage site.

Charles J. Fourie is a South African writer, director working in television, film and theater. Fourie staged his first play as a drama student at the Windybrow Theatre in 1985, and went on to receive the Henk Wybenga bursary as most promising student in the same year.

Barney Simon was a South African writer, playwright and director. 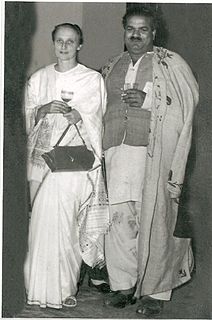 Freda Bedi was a British woman who was the first Western woman to take ordination in Tibetan Buddhism, which occurred in 1972. She was born in Derby, England.

Vinette Ebrahim is a South African actress and playwright known for her role as Charmaine Meintjies in the SABC 2 soap opera 7de Laan. She is the sister of actor Vincent Ebrahim.

Angelique Rockas is an actress, producer and activist. Rockas founded Internationalist Theatre in the UK with patron Athol Fugard. The theater featured multi-racial casts in classical plays, breaking racial barriers that were once accepted norms for theatrical performances.

Helena Nogueira is a South African film director, "the first woman to direct a feature film in South Africa".