Shillingstone railway station was a station on the Somerset and Dorset Joint Railway (S&DJR), serving the village of Shillingstone in the English county of Dorset. Shillingstone is the last surviving example of a station built by the Dorset Central Railway (one of the forerunners of the S&DJR). [1]

The station closed in 1966, when services were withdrawn from the S&DJR route. Since 2001, enthusiasts have been working to re-open the station as a heritage railway attraction. [1] The main building has now been renovated, and opened to the public as a museum, shop and refreshment room in 2008. [1] [2]

The station was opened on 31 August 1863 by the Somerset and Dorset Railway, although planned and designed by one of its two predecessors, the Dorset Central Railway. Initial train services were provided by the London and South Western Railway (LSWR). In 1875, the Midland Railway and the LSWR together took over a joint lease of the line, forming the Somerset and Dorset Joint Railway. [3]

At the 'Grouping' of 1923, the Somerset & Dorset Railway Company was dissolved, the lease terminated, and the line and stations became the joint property of the Southern Railway and the London Midland and Scottish Railway companies. [3]

Shillingstone station became part of the Southern Region of British Railways when the railways were nationalised in 1948. The regional boundaries later changed several times and the station was subsequently transferred to the Western Region, the final (January 1963) boundary being somewhere between Shillingstone and Blandford. [3]

After a prolonged run-down of services, including the closure of freight and goods services on 5 April 1965, the station was closed, along with the remaining former S&DJR lines, on 7 March 1966, as a result of the Beeching Axe. The station was fully staffed until closure. Track-lifting commenced in 1967, Shillingstone being tackled between March and May. The signal box and platform shelters were demolished at this time, and the last train through the station was the demolition train, hauled by a small diesel shunter. [1]

Dorset County Council purchased the trackbed for a proposed Shillingstone by-pass. Various furniture manufacturing companies were sited in the station yard, over the years, occupying industrial buildings constructed in the late 1970s, some of them making partial use of the station building. By December 2002, the by-pass plan had been shelved and the station was unoccupied. Dorset County Council decided to dispose of the redundant station, and, after protracted negotiations, the North Dorset Railway Trust took over the lease in July 2005, with a view to re-open the station as a heritage railway attraction. Restoration work commenced in 2003 and has continued steadily since then (see "Shillingstone Railway Project"). [1]

A length of trackbed around Shillingstone has been opened as a section of the North Dorset Trailway, [4] providing an easy-access route for walkers, cyclists and horse riders. At Shillingstone station the trailway is routed up and along the down platform, providing a clear view of the restored buildings. [5]

The station is located on the outskirts of the village, to the north-east. It has two platforms, with brick buildings on the 'up' (north-bound) platform and (originally) a simple wooden waiting shelter on the much longer 'down' platform. The main station building has a substantial wooden awning over the platform. During its original working life, lighting was provided by oil lamps, there being no electricity supply. [6] (A supply has since been installed.)

The station was important as one of the passing places on the single-line between Templecombe and Blandford. [6] The passing loop, new down platform and signal box were opened in 1878; in later years the loop was 511 yards (467 m) long, as measured between the facing points at each end, compared with 514 yards (470 m) at Stalbridge. There was a small goods yard to the north of the station, on the up side, with a cattle dock, a small goods shed, and a 5-ton crane. [6] There was a siding at the north end of the passing loop on the down side, and another just to the south of the station (also on the down side and installed in 1901) which could accommodate a 14 coach train. [6] The yard, the sidings and the passing loop were controlled from a signal box at the north end of the up platform.

To re-build Shillingstone Station and surroundings to as it appeared in 1950-1960 and to help to educate for future generations. Founded Around the late 1990s the North Dorset Railway Trust (which supports The Shillingstone Station Project) was formed by Michael Paulley and this is when the hard work, negotiation, letter writing and publicity begin in earnest. 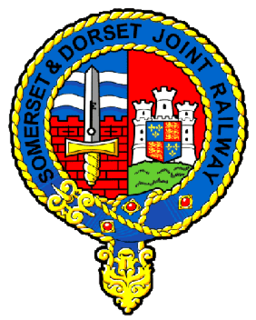 The Somerset and Dorset Joint Railway, also known as the S&D, SDJR or S&DJR, was an English railway line connecting Bath and Bournemouth, with a branch from Evercreech Junction to Burnham-on-Sea and Bridgwater. Strictly speaking, the main line ran from Bath Junction to Broadstone, as the line between Broadstone and Bournemouth was owned by the London and South Western Railway, while the line between Bath Junction and Bath was owned by the Midland Railway. 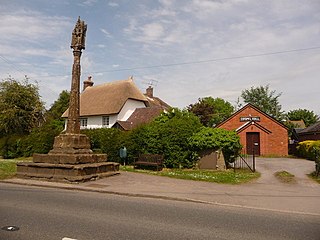 Shillingstone is a village and civil parish in the Blackmore Vale area of north Dorset, England, situated on the River Stour between Sturminster Newton and Blandford Forum. In the 2011 Census the civil parish had 479 households and a population of 1,170. 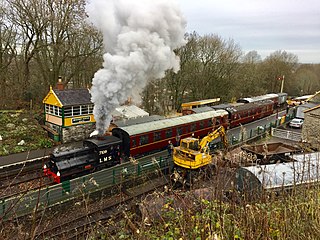 The Somerset & Dorset Railway Heritage Trust (S&DRHT) is a heritage railway line in Somerset, England, that runs on a restored section of the Somerset and Dorset Joint Railway. The line is approximately 1 mile long and operates from Midsomer Norton South.

Templecombe railway station serves the town of Templecombe in Somerset, England. It is situated on the West of England Main Line, 112 miles 2 chains (180.3 km) down the line from London Waterloo. The main station opened in 1860 but a smaller station on the lower line opened in 1862. It was closed in 1966 but was reopened in 1983 following local community pressure. It is currently operated by South Western Railway.

Highbridge and Burnham railway station is situated on the Bristol to Taunton Line within the town of Highbridge, Somerset, and also serves the neighbouring town of Burnham-on-Sea. It is 145 miles 25 chains from the zero point at London Paddington via Box. It is unstaffed but managed by Great Western Railway who operate all the regular services.

Midford railway station was a single-platform station on the Bath extension of the Somerset and Dorset Railway, just to the north of the point where the double-track became a single track. It served the village of Midford. The station was closed with the rest of the line in March 1966 under the Beeching axe, though it had been unstaffed for some years before that. 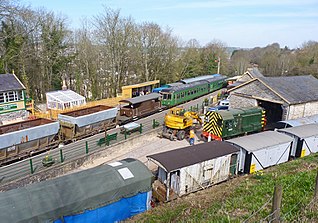 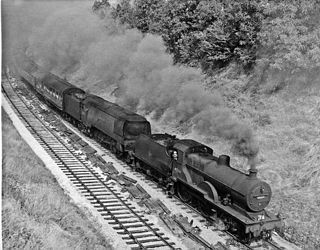 Chilcompton railway station was a station on the Somerset and Dorset Joint Railway at Chilcompton in the county of Somerset in England and opened on 20 July 1874. Originally the station consisted of a single platform on the Down side with a station building and possibly also a siding. In 1876 a loop and second platform were opened on the Up side, controlled from a 16-lever signal-box on the Down platform, which also controlled access to the goods yard. The line to Binegar was doubled in 1885. In 1886 the line to Midsomer Norton and Radstock was doubled and a replacement 13 lever signal box provided just beyond the Binegar end of the Up platform. The station closed to goods in 1964 and the signal-box closed in 1965; passenger services were withdrawn when the SDJR closed on 7 March 1966. 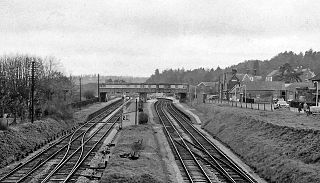 Broadstone was a railway station in the northern part of the Borough of Poole in the county of Dorset in England. It opened in 1872 under the name of New Poole Junction and closed to passengers in 1966 and to goods in 1969. Between these dates there were several changes of name for a station which at its height provided a suburb of Poole with four substantial platforms and a goods yard. A prominent feature of the station was the large footbridge needed to span the four running lines.

Stourpaine & Durweston Halt was a station in the English county of Dorset. It was located between Shillingstone and Blandford Forum on the Somerset and Dorset Joint Railway. The station consisted of a small concrete platform and shelter. 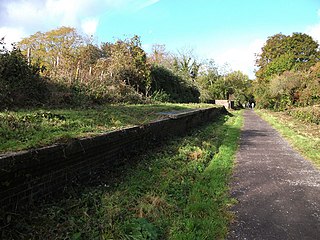 Spetisbury railway station was a station in the English county of Dorset. It was located between Blandford Forum and Bailey Gate on the Somerset and Dorset Joint Railway. The station consisted of two platforms, a station building, signal box and shelters.

Stalbridge railway station was a station in Stalbridge in the county of Dorset, England. It was located on the Somerset and Dorset Joint Railway. Sited on a single line stretch, the station had a passing loop with a station building on the down side. The goods yard and adjacent level crossing were controlled from a signal box.

Henstridge railway station was a station at Henstridge in the county of Somerset, in England. It was located on the Somerset and Dorset Joint Railway. Sited on a single line stretch, the station had one short platform with a modest station building. A siding was controlled from a ground frame, and an adjacent level crossing operated by hand. 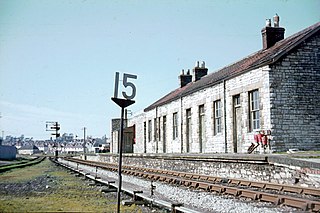 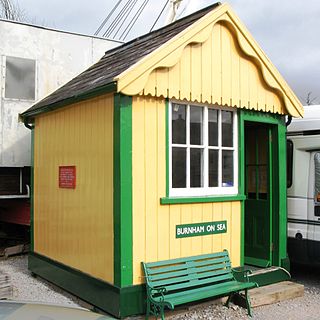 Burnham-on-Sea railway station was located within the town of Burnham-on-Sea, Somerset, and was the terminus of the Burnham branch of the Somerset and Dorset Joint Railway. Opened as Burnham by the Somerset Central Railway on 3 May 1858, it was renamed in 1920.

The Salisbury and Yeovil Railway linked Salisbury (Wiltshire), Gillingham (Dorset) and Yeovil (Somerset) in England. Opened in stages in 1859 and 1860, it formed a bridge route between the main London and South Western Railway (LSWR) network and its lines in Devon and Cornwall. Its trains were operated by the LSWR and it was sold to that company in 1878. Apart from a short section in Yeovil it remains open and carries the London Waterloo to Exeter service of South Western Railway. 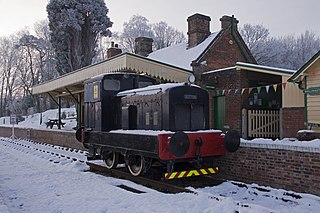 North Dorset Railway is a heritage railway based at Shillingstone railway station on the former Somerset and Dorset Joint Railway.

The New Somerset and Dorset Railway, formed in early 2009, aims to restore the complete line of the Somerset and Dorset Joint Railway as a modern transport system for the 21st century. The group also has a heritage aspect, to encourage future use by steam specials, etc. Work is currently concentrated on five sites, Midford - Midsomer Norton - Gartell - Shillingstone - Spetisbury. Some of these are operated by independent groups.