The Small Guild (Latvian : Mazā Ģilde) is a building situated in Riga, Latvia, at 3/5 Amatu Street. The building was erected in the years 1864—66 after a project by architect Johann Felsko in Neo-Gothic style. [1] 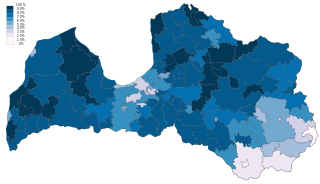 Johann Daniel Felsko was an architect, urban planner and the chief architect of Riga for 35 years in the period 1844—79. The most significant accomplishment of his creative work is the development of the center of Riga.

The Latvian National Museum of Art is the richest collection of national art in Latvia. It houses more than 52,000 works of art reflecting the development of professional art in the Baltic area and in Latvia from the middle of the 18th century until the present time.

House of the Blackheads is a building situated in the old town of Riga, Latvia. The original building was erected during the first third of the 14th century for the Brotherhood of Blackheads, a guild for unmarried merchants, shipowners, and foreigners in Riga. Major works were done in the years 1580 and 1886, adding most of the ornamentations. The sculptures were made by the workshop of August Volz.

The Museum of the Occupation of Latvia is a museum and historic educational institution located in Riga, Latvia. It was established in 1993 to exhibit artifacts, archive documents, and educate the public about the 51-year period in the 20th century when Latvia was successively occupied by the USSR in 1940–1941, then by Nazi Germany in 1941–1944, and then again by the USSR in 1944–1991. Official programs for visits to Latvia of top level representatives of other countries normally include a visit to the Museum of the Occupation.

The Ethnographic Open-Air Museum of Latvia is an open-air museum located just outside Riga, the capital of Latvia, on the lightly wooded shores of Jugla Lake.

The Latvian Museum of National History, is a national history museum in Riga, Latvia. 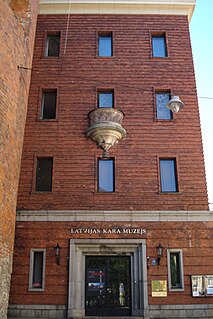 Boja Manor is a manor house in Kazdanga parish, Aizpute municipality, in the historical region of Courland, in western Latvia. It was built in 1860 for the estate owner Baron von Behr. The building currently houses a museum.

Kalna Manor, also called Sieksāte Manor, is a manor house in the historical region of Courland, in western Latvia. The complex includes a manor, park and farm buildings. 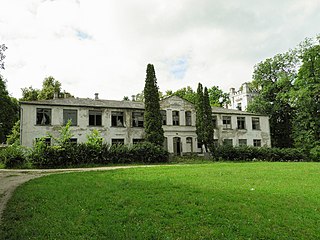 Bornsminde Manor is a manor house remodelled in Gothic revival style located in the historical region of Zemgale, in Latvia.

Blankenfelde Manor is a manor in the historical region of Zemgale, in Latvia. Built at the last quarter of the 17th century, it changed owners several times. The renovation work is currently being processed.

Suntaži Manor is a manor house in the historical region of Vidzeme, northern Latvia. Originally built as a one-story structure near the end of the 18th century, it was enlarged during the 19th century. Severely damaged by fire in 1905, it was restored in 1909. Though the building housed the Suntaži primary school after 1920, it has housed the Suntaži secondary school since 1952.

The Large Guild is a building situated in Riga, Latvia, and was erected in the years 1854 - 1857 after a project by architect K. Bejne in English Gothic style. The building was erected to house the guild of the same name, and today it houses the Latvian National Symphony Orchestra.

St. George's Church used to be a catholic church in Riga, the capital of Latvia. The church building now houses the Latvian Museum of Decorative Arts and Design and is situated at the address 10/12 Skārņu Street.

The Cat House is a building situated at 10 Meistaru iela in the old town of Riga, the capital of Latvia. It was built in 1909 according to the blueprint of architect Friedrich Scheffel. The building is styled as medieval architecture with some elements of Art Nouveau. It is known for the two cat sculptures, with arched backs and raised tails, on its roof. It is said that the owner of the house wanted the cats to be placed with their tails turned towards the house of the Great Guild, which is nearby, as he held a grudge against its members. It was later ordered that the cats should be turned so as to face the guildhouse. 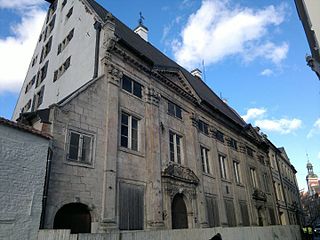 The Dannenstern House is a historical building in the Old town of Riga, Latvia. 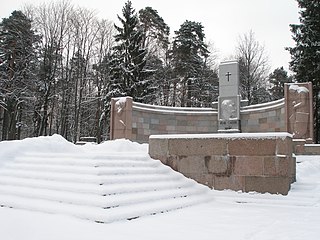