The Southland Bowling League (SBL) is a National Collegiate Athletic Association (NCAA) bowling-only conference. The SBL was founded in 2015 for schools that sponsor women's bowling teams, but do not have bowling sponsored by their primary conferences. The SBL champion has received an automatic bid to the NCAA Bowling Championship since the NCAA first awarded such bids in 2018. While the conference operates independently, administrative services are provided by the Southland Conference. [1] [2]

The National Collegiate Athletic Association (NCAA) is a non-profit organization which regulates athletes of 1,268 North American institutions and conferences. It also organizes the athletic programs of many colleges and universities in the United States and Canada, and helps more than 480,000 college student-athletes who compete annually in college sports. The organization is headquartered in Indianapolis, Indiana.

Ten-pin bowling is a type of bowling in which a bowler rolls a bowling ball down a wood or synthetic lane toward ten pins positioned in a tetractys at the far end of the lane. The objective is to knock down all ten pins on the first roll of the ball. 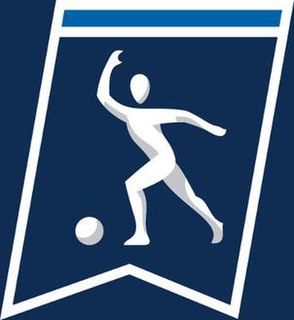 On August 7, 2018, Southland Bowling League and Youngstown State University announced that Youngstown State's bowling program was joining the league for competition beginning in the 2018-2019 season. Youngstown State replaces Monmouth, who accepted an invitation to join the MEAC. [7]

The Southeastern Conference (SEC) is an American college athletic conference whose member institutions are located primarily in the Southern part of the United States. Its fourteen members include the flagship public universities of eleven states, two additional public land grant universities, and one private research university. The conference is headquartered in Birmingham, Alabama. The SEC participates in the National Collegiate Athletic Association (NCAA) Division I in sports competitions; for football, it is part of the Football Bowl Subdivision (FBS), formerly known as Division I-A. 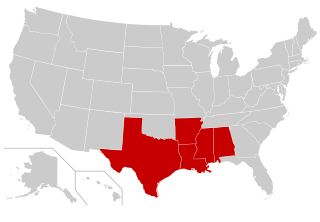 The Southwestern Athletic Conference (SWAC) is a collegiate athletic conference headquartered in Birmingham, Alabama, which is made up of historically black colleges and universities (HBCUs) in the Southern United States. It participates in the NCAA's Division I for all sports; in football, it participates in the Football Championship Subdivision (FCS), formerly referred to as Division I-AA.

The Horizon League is a 10-school collegiate athletic conference in the National Collegiate Athletic Association (NCAA) Division I, whose members are located in and near the Midwestern United States.

The Vanderbilt Commodores are the NCAA athletic teams of Vanderbilt University, located in Nashville, Tennessee. The university fields 16 varsity teams, 14 of which compete in the Southeastern Conference. Vanderbilt's women's lacrosse team plays in the American Athletic Conference, with the upcoming 2019 season being its first in that league. The bowling team plays in the Southland Bowling League. The University of Tennessee Volunteers are Vanderbilt's primary athletic rival, and the only other SEC team in the state of Tennessee.

The Texas Longhorns baseball team represents The University of Texas at Austin in NCAA Division I intercollegiate men's baseball competition. The Longhorns currently compete in the Big 12 Conference.

The Sam Houston State Bearkats baseball team is a varsity intercollegiate athletic team of Sam Houston State University in Huntsville, Texas, United States. The team is a member of the Southland Conference, an athletic conference in Division I of the National Collegiate Athletic Association (NCAA). The team plays its home games at Don Sanders Stadium. Following the 2014 season, Matt Deggs replaced head coach David Pierce, who left for the same position with the Tulane Green Wave.

The 2011 NCAA Division I FCS football season, part of college football in the United States, was organized by the National Collegiate Athletic Association (NCAA) at the Division I Football Championship Subdivision (FCS) level. The season began on September 1, 2011, and concluded with the 2012 NCAA Division I Football Championship Game on January 7, 2012, at Pizza Hut Park in Frisco, Texas. North Dakota State won their first FCS championship, defeating Sam Houston State by a final score of 17–6.

The American Athletic Conference is an American collegiate athletic conference, featuring 12 member universities and six associate member universities that compete in the National Collegiate Athletic Association's (NCAA) Division I, with its football teams competing in the Football Bowl Subdivision (FBS). Member universities represent a range of private and public universities of various enrollment sizes located primarily in urban metropolitan areas in the Northeastern, Midwestern, and Southern regions of the United States.

Maria Bulanova is a right-handed ten-pin bowler from Moscow, Russia, and is considered one of the top players on the Federation of Bowling of Russia (FBR). Champion of Russia 2013-2015, the first in Russian history individual and team gold winner in international youth championships. Fifteen time prize winner of European youth championships. Winner of European Champions Cup 2015. The first Russian athlete to win a Gold medal in an international adult championship. She is a member of team Alliance and a member of the Brunswick pro staff.

The 1995 NCAA Division I baseball season, play of college baseball in the United States organized by the National Collegiate Athletic Association (NCAA) began in the spring of 1995. The season progressed through the regular season and concluded with the 1995 College World Series. The College World Series, held for the forty ninth time in 1995, consisted of one team from each of eight regional competitions and was held in Omaha, Nebraska at Johnny Rosenblatt Stadium as a double-elimination tournament. Cal State Fullerton claimed the championship for the second time.

The 1996 NCAA Division I baseball season, play of college baseball in the United States organized by the National Collegiate Athletic Association (NCAA) began in the spring of 1996. The season progressed through the regular season and concluded with the 1996 College World Series. The College World Series, held for the fiftieth time in 1996, consisted of one team from each of eight regional competitions and was held in Omaha, Nebraska at Johnny Rosenblatt Stadium as a double-elimination tournament. LSU claimed the championship for the third time.

The 2017 Southland Conference Baseball Tournament was held from May 24 through 27. The top eight regular season finishers of the league's thirteen teams met in the double-elimination tournament to be held at Constellation Field in Sugar Land, Texas. Sam Houston State won their sixth tournament championship to earn the conference's automatic bid to the 2017 NCAA Division I Baseball Tournament. Abilene Christian and Incarnate Word are ineligible for postseason play as they transition from Division II.

The 2018 NCAA Division I Women's Soccer Tournament will be the 37th annual single-elimination tournament to determine the national champion of NCAA Division I women's collegiate soccer. The semifinals and championship game will be played at WakeMed Soccer Park in Cary, North Carolina from November 30 – December 2, 2018 while the preceding rounds will be played at various sites across the country during November 2018.