Last updated May 15, 2022
Unit of the Singapore Police Force

The Special Operations Command (SOC) is a specialist police tactical unit of the Singapore Police Force (SPF) specialising in riot control and high-threat incidents. It was formed on 10 September 1992 to unify specialist units into a single strategic reserve force that the regular officers need to call upon in any contingency plan and serious case of public disorder.

There are multiple full-time units under the SOC: [1]

In addition, there are auxiliary units who hold primary duties elsewhere in the SPF but have secondary appointments in these units when needed: [1]

In addition, there is also a Special Operations Training Command (SOTC) under SOC at Queensway Base.

The SOC traces its history back to 1952, when an anti-riot squad of 60 police officers was formed in the wake of the Maria Hertogh riots, which broke out in 1950 and demonstrated the incapability of existing measures in containing serious cases of public disorder. [1] The Police Task Force, predecessor of what is now the Police Tactical Unit, was hence created.

In response to changing demands in urban security issues, the Police MRT Unit was formed in 2005 to provide armed security within and around stations and trains on the Mass Rapid Transit network. Pooled from both regular and NSF manpower resources, they are the first SOC unit to be formed which involves regular front-line policing from inception. From 15 August 2009, the unit was renamed as the Public Transport Security Command and became an independent unit, separating from the SOC.

Under the Police Workplan Seminar 2017, a new National Servicemen unit called the Public Order Troops was formed on September 2018 under PTU and it can be called upon to work alongside their regular counterparts during major incidents such as riots, national emergencies and public order incidents, as well as possible terrorist attacks, and the POT will be implemented in the year 2023. [2]

The SOC also sets up and coordinates the specially trained Peacekeeping Force personnel for missions overseas under command of the United Nations Department of Peacekeeping Operations. [3]

Main article: List of Singapore police officers killed in the line of duty

SOC troopers are typically armed with the MP5K, MP5N sub-machine guns and FN SCAR assault rifle. New weapons introduced from 2004 include the H&K 69, a grenade launcher which will replace the existing ARWEN 37. Their handguns will be replaced by the new H&K USP Compact, while the Sphinx 3000 will also be introduced. 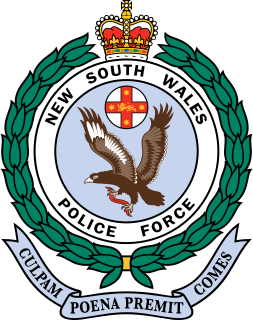 The New South Wales Police Force is the primary law enforcement agency of the state of New South Wales, Australia. Divided into Police Area Commands (PACs), for metropolitan areas and Police Districts (PDs), for regional and country areas, the NSW Police Force consists of more than 400 Police stations and over 18,000 officers, who are responsible for covering an area of 801,600 square kilometres and a population of more than 8.2 million people. 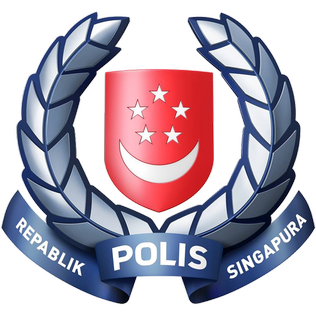 The Singapore Police Force (SPF) is the national and principal law enforcement agency responsible for the prevention of crime and law enforcement in the Republic of Singapore. It is the country's lead agency against organised crime; human, weapon trafficking; cyber crime; as well as economic crime that goes across domestic and international borders, but can be tasked to investigate any crime under the purview of the Ministry of Home Affairs (MHA) and is accountable to the Parliament of Singapore.

The Special Tactics and Rescue (STAR) is a tactical unit of the Singapore Police Force (SPF), tasked to provide a tactical armed-response capability, and specialises in counter-terrorism and hostage rescue operations in Singapore. 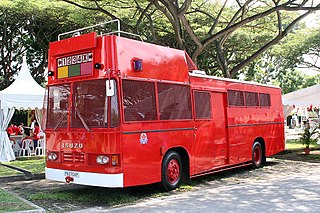 The Police Tactical Unit (PTU) is a paramilitary specialist unit of the Singapore Police Force and comes under the direct command of the Special Operations Command. Based in Queenstown, it is the main anti-rioting and disaster-management unit of the police force. They are also called upon to handle cases of serious crime in progress, particularly cases involving firearms. From 2004, PTU officers also presented greater public prominence when they conducted patrols in public areas, such as at Orchard Road, Holland Village and Serangoon Gardens Estate, partly as a response to greater terrorism concerns. 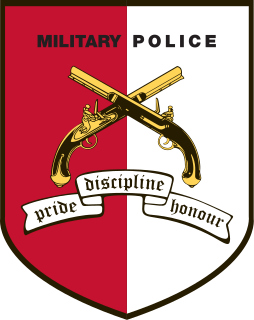 The Singapore Civil Defence Force (SCDF) is an emergency service in Singapore under the Ministry of Home Affairs that provides firefighting, technical rescue, and emergency medical services and coordinates national civil defence. 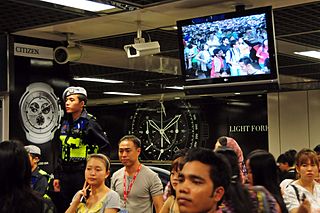 The Public Transport Security Command (TransCom) is a specialised transit police unit of the Singapore Police Force (SPF). It was first established as the Police MRT Unit (PMU) in 2005 as a component unit of the Special Operations Command in response to the need for greater security in public transport operations in Singapore influenced by security concerns at the time. On 15 August 2009, the unit was upgraded into a separate specialist division and took its present name.

Queensway Base is the headquarters that is home to the Special Operations Command (SOC), a front line department of the Singapore Police Force (SPF). It is situated directly across Queensway, and was formerly the Old Queenstown Police Station. Units such as Police Light Strike Force, Police KINS Training Camp, Police Tactical Unit, STAR unit and some SOC units are located here.

Counter-terrorism in Singapore is a series of detection and prevention measures to minimize the damage caused by terrorism. These measures involve the participation of all levels of society, including defence, internal security, border and infrastructure security, civil defense, and gives special focus on areas such as medical readiness and psychological preparedness.

The State Protection Group (SPG) is part of the Counter Terrorism & Special Tactics Command of the New South Wales Police Force and was established in 1991 to deal with extraordinary policing responses. The SPG directly supports police in high-risk incidents such as sieges with specialised tactical, negotiation, intelligence and command-support services. The unit also provides rescue and bomb disposal support, canine policing, and armoury services. 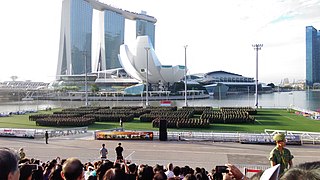 National Service (NS) is the national policy in Singapore mandated by statutory law that requires all male Singaporean citizens and second-generation permanent residents to serve a period of compulsory service in the uniformed services. It was first instituted in 1967 to help build Singapore's military forces soon after its independence, and has since been expanded to involve the police and civil defence force as well.

The Volunteer Special Constabulary (VSC) is an important component of the Singapore Police Force (SPF), contributing more than seventy years of volunteer service to the nation. The VSC officers are imbued with equal powers of a regular police officer to enforce law and order in Singapore.

The Police Tactical Unit is a unit within the Hong Kong Police Force which provides an immediate manpower reserve for use in large-scale emergencies. Unit companies are attached to all land Regions and are available for internal security, crowd control, anti-crime operations, disaster response and riot control throughout Hong Kong. The PTU is often referred as the 'Blue Berets', which is in reference to the blue berets worn as part of the uniform. The PTU base and training camp is located in Fanling.

A Police Support Unit or PSU is a unit of police officers who have undergone specialist tactical training in Public Order and Riot Control. 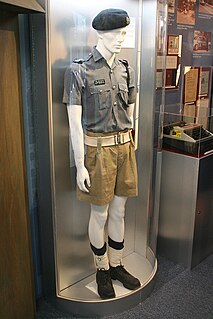 The Singapore Police Force has employed several different styles of uniforms throughout its history. Since 1969 it has used dark blue for its uniforms, although the first police uniforms introduced in 1856 were also in the same colour.

C.L.I.F. is a police procedural series produced by Mediacorp Singapore in 2011 in collaboration with the Singapore Police Force. It was aired from 31 May to 27 June 2011 on free-to-air MediaCorp Channel 8 and consists of 20 episodes. The drama stars Tay Ping Hui, Qi Yuwu, Elvin Ng, Joanne Peh, Chris Tong and Tracy Lee in the main roles with a large ensemble supporting cast. It was directed by Chong Liung Man, who previously directed another award-winning police procedural C.I.D., which also starred Tay and Qi in the lead roles as police officers. 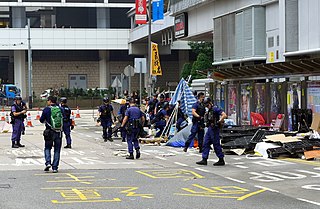 The Protective Security Command (ProCom) is a specialist counter-terrorist police unit of the Singapore Police Force (SPF). ProCom was formed to build up Singapore Police Force's public security capabilities and project police presence at security-sensitive locations. On 8 July 2016, the unit was commissioned.