Start Gniezno is a Polish motorcycle speedway team based in Gniezno who currently race in First League (2nd division). The club was initially part the multi-sports club with the prefix SKS, before disbanding and being reformed as TŻ (Towarzystwo Żużlowe; Polish : Speedway Association) in 2004 as an independent club and after another bankruptcy reformed once again under the prefix GTM (Gnieźnieńskie Towarzystwo Motorowe; Polish : Gniezno Speedway Association). 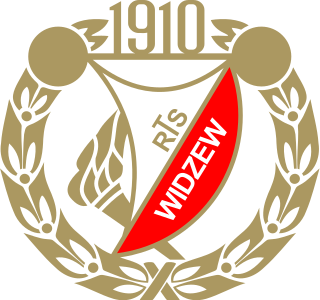 RTS Widzew Łódź is a Polish football club based in Łódź. The club was founded in 1910. Its official colours are red and white, hence their nicknames Czerwona Armia and Czerwono-biało-czerwoni (Red-white-reds).

Falubaz Zielona Góra is a Polish speedway team based in Zielona Góra who currently races in Speedway Ekstraliga. The club has won Polish Speedway League seven times. It is commonly known as Falubaz due to one of its former names.

Poznańskie Stowarzyszenie Żużlowe is a Polish speedway team based in Poznań who currently race in First League. The club never rode in the Polish top division. Their nickname is "The Scorpions".

The 28th Mieczysław Połukard Criterium of Polish Speedway League Aces will be the 2009 version of the Criterium of Aces. It took place on 29 March at the Polonia Stadium in Bydgoszcz, Poland. In the 2008 season, Criterium was won by multi-winner Tomasz Gollob, who beat junior Emil Saifutdinov and Tomasz Chrzanowski.

Sławomir Musielak is a Polish motorcycle speedway rider who is a member of the Polish junior national team. Musielak finished 2nd in the 2009 Individual Speedway Junior Polish Championship and was third in the 2009 Silver Helmet Final.

ROW Rybnik was a multi-sports club from Rybnik, Upper Silesia, Poland, founded in 1964 as a result of a merger between two local clubs RKS "Górnik" Rybnik and KS "Górnik" Chwałowice. ROW stands for Rybnicki Okręg Węglowy which means The Rybnik Coal District. It catered for 13 different disciplines upon its establishment. Although no longer one club, several sections have remained active independently, using the "ROW" name.

Klub Motorowy Cross Lublin also known as the Speed Car Motor Lublin through sponsorship rights, is a Polish motorcycle speedway team based in Lublin which currently competes in Ekstraliga.