Stony Lake (also called Stoney Lake) is a lake in Peterborough County in central Ontario, Canada. [1] [2] [3] [4] There are three interconnected lakes (Upper Stony Lake to the northeast, Stony Lake in the centre, and Clear Lake to the southwest) which together are known as Stony or Stoney Lake. Stoney Lake forms the eastern end of the Kawartha Lakes region. It is primarily a summer cottage area but there are many permanent residences on the lakes.

Stoney Lake was known to early European settlers as Salmon Trout Lake, but the modern name is fully appropriate. The lake actually consists of Stony Lake for the western and southern arms, the east arm is Stoney Lake. Salmon trout are no longer evident, but islands and shoals are everywhere. Today, Stoney Lake represents the classic Ontario ‘cottage country’, enjoyed by its many seasonal residents, by an increasing number of year-round residents, by boaters using the Trent–Severn Waterway, sport fishermen and many others.

Stoney Lake is located in Peterborough County nearly two hours northeast of Toronto. The lake, some 20 miles (32 km) long from Young's Point, Ontario to the lake's eastern shores, about 234 metres (768 ft) above sea level, with a combined surface area of approximately 28 square kilometres (11 sq mi), and encompasses over 1,000 islands. Sportfish caught in the lake include smallmouth and largemouth bass, walleye (Pickerel) and muskellunge (Musky). Geologically, the Kawartha lakes are on the boundary between two important land forms.

One of its islands, Fairy Lake Island, encloses another small body of water: Fairy Lake. Fairy Lake is surrounded by private property.

Like most lakes in Ontario, Stony Lake was created during and after the last ice age. The lake straddles the border between the Canadian Shield and the Great Lakes–St. Lawrence Lowlands land forms. The lake is influenced both by the rugged granite of the Canadian Shield to the north, and by the more gentle, heavily forested Great Lakes–St. Lawrence Lowlands to the south.

The region has been inhabited for thousands of years. Early First Nations settlement is evidenced by a remarkable collection of prehistoric rock carvings to be seen at the east end of Stony Lake in Petroglyphs Provincial Park. On-going historic research argues that Samuel de Champlain traveled through the area's lakes, rivers and overland portages in the 17th century. The First Nations were joined in the 19th century by European settlers intent on logging and farming. In the mid-19th century logging became a large industry in the Kawarthas and Stoney Lake was used as part of the highway for moving logs to the sawmills downriver. The Trent-Severn Canal system was built early in the 20th century, and became the dominant commercial waterway in the region.

The American Canoe Association met on Juniper Island in 1883, and development evolved naturally from travellers fishing or hunting from simple lodges. Lengthier camping expeditions on the many islands became common. In the late 19th century and early 20th century many people from Ontario and the bordering U.S. states bought Crown land and built cottages. These were generally simple, one-story frame structures with few amenities. As well, those early settlers, at Young's Point, Kawartha Park, McCracken's Landing, Mount Julian and others around the lake, found new sources of income by helping cottagers in many ways: ice cutting, building, guiding, boat repairs and domestic chores. Stoney Lake today is principally used for recreational purposes. Some of the large islands include Juniper and Horseshoe island.

The film Cheaper by the Dozen 2 was shot at Mark Kennedy's property on the lake at Burleigh Falls. A water skiing scene in the movie contains several scenes of the Lake. The 2003 remake of the film The In-laws was shot on Stony Lake. The water ski team from Cypress Gardens, Florida has stayed at the Irwin Inn and practiced on the lake in front of the inn. Canadian rock band Rush, started work on the album Moving Pictures in August,1980 at Stony Lake, Ontario. Country singer Ronnie Hawkins also owned an estate on the lake until he sold it in late 2017 for $3.98 million. 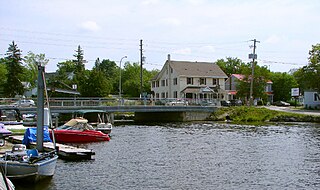 Coboconk, often shortened to Coby, is a community in the city of Kawartha Lakes, in the south-central portion of the Canadian province of Ontario. The village lies at the junction of Highway 35 and former Highway 48, on the northern tip of Balsam Lake, the highest point on the Trent–Severn Waterway. Coboconk has a prominent role in the logging, limestone, and tourism industries of the Kawartha Lakes region over the past 150 years.

Chemong Lake, or Lake Chemong, " is a lake 8 kilometres (5.0 mi) northwest of Peterborough, Ontario, Canada, near the town of Bridgenorth. The lake extends from near Fowlers Corners north to near Curve Lake. Lake Chemong has a length of 14 kilometres (8.7 mi) and a width of 1 kilometre (0.62 mi).

Central Ontario is a secondary region of Southern Ontario in the Canadian province of Ontario that lies between Georgian Bay and the eastern end of Lake Ontario.

Lake Scugog is an artificially flooded lake in Scugog, Regional Municipality of Durham and the unitary city of Kawartha Lakes in central Ontario, Canada. It lies between the communities of Port Perry and Lindsay. The lake has been raised and lowered several times over its history. Though not technically part of the Kawartha lakes due to its shallow depths, it is often geographically linked to them. Its sole outflow, the Scugog River, connects to Sturgeon Lake. Lake Scugog is in the Great Lakes Basin and forms part of the Trent–Severn Waterway.

The Talbot River is a river in the Great Lakes Basin in Central Ontario, Canada which flows from Talbot Lake to Lake Simcoe and forms the border between Ramara township to the north and the Brock township to the south from the river mouth to the edge of their border with the city of Kawartha Lakes at the east.

The Kawartha Lakes (/kə'wɔrθɐ/) are a chain of lakes in south-central Ontario, Canada that form the upper watershed of the Trent River. The lakes are located on the boundary between the Paleozoic limestone regions of the Golden Horseshoe, and the Precambrian granite Canadian Shield of northern and central Ontario. 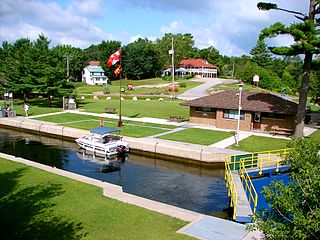 The Municipality of Trent Lakes is a lower-tier township in the rural, mostly wooded northern section of Peterborough County, Ontario, Canada. The municipality has a primarily cottage and tourist industry based economy but has grown year round residency due to its commute distance to the Greater Toronto Area.

Bobcaygeon is a community on the Trent–Severn Waterway in the City of Kawartha Lakes, east-central Ontario, Canada.

Kennisis Lake is the 2nd largest lake in the Haliburton Highlands with a surface area of over 1,640 hectares in the area of Ontario just south west of Algonquin Provincial Park. From end to end, the lake is approximately 23 kilometres (14 mi) long. There is a smaller counterpart, named Little Kennisis Lake. 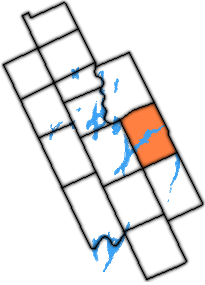 Jack Lake is a lake and reservoir in the municipalities of Havelock-Belmont-Methuen and North Kawartha, Peterborough County in Central Ontario, Canada, about 100 mi (160 km) directly northeast of Toronto and at the edge of the Canadian Shield in the northeastern portion of the Kawartha lakes region. The lake is in the Great Lakes Basin, and serves as a small headwater pond for the Trent-Severn Waterway. The Dispersed rural community of Jack Lake is on the northwest shore of the lake, reached by Peterborough County Road 52 / Jack Lake Road from the community of Apsley, about 5 kilometres (3.1 mi) to the north on Ontario Highway 28.

The Gull River is a river in Algonquin Highlands and Dysart et al, Haliburton County and the single-tier municipality of Kawartha Lakes in south-central Ontario, Canada. It is in the Trent River and Lake Ontario drainage basins, and flows from southern Algonquin Provincial Park to Balsam Lake on the Trent–Severn Waterway. 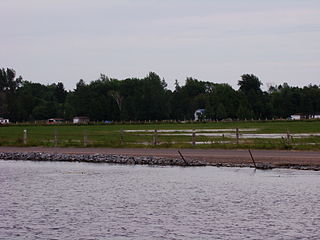 Mitchell Lake is a small, artificial lake in the Great Lakes Basin and located in the city of Kawartha Lakes in Central Ontario, Canada. The lake was formed sometime in the first decade of the twentieth century alongside the construction of the Kirkfield Lift Lock, which was completed and operational by the end of 1907. It is part of the summit of the Trent–Severn Waterway, the middle of a connection via canals of Balsam Lake on the Gull River system, which flows eventually to Lake Ontario, and the Kirkfield Lift Lock and Canal Lake on the Talbot River system, which flows to Lake Simcoe and eventually to Lake Huron.

Silver Lake is a small lake in the city of Kawartha Lakes in Central Ontario, Canada. Located near the community of Coboconk, it is the lowest lake on the Gull River, a drainage basin that supplies water at its mouth to Balsam Lake at the top of the Trent-Severn Waterway. Like many other lakes in the Kawarthas, Silver Lake lies in a depression formed between the Precambrian granite to the north, and the Ordovician limestone to the south.

Buckhorn Lake is a lake in the townships of Trent Lakes and Selwyn in Peterborough County, Ontario, Canada, and is one of the Kawartha lakes.

King's Highway 36, commonly referred to as Highway 36, was a provincially maintained highway in the Canadian province of Ontario. The highway connected Highway 7 and Highway 35 in Lindsay with Highway 28 in Burleigh Falls, providing access to recreational cottages along the northern shore of several of the Kawartha lakes as well as to multiple communities, including Bobcaygeon. Today it is known as Kawartha Lakes City Road 36 and Peterborough County Road 36.

Little Lake is a small lake on the Otonabee River in the city of Peterborough, Ontario, Canada. The lake is in the downtown of the city and is used for fishing, swimming, boating, and for various special events. The lake lies on the water route from Lake Ontario to the Kawartha Lakes. The area around the lake was first settled by Europeans around the start of the 19th century. Steam- and water-powered saw mills were built on the lake and on the river upstream to prepare lumber for shipment overseas. Sawdust and other debris from the mills polluted the lake, killed the fish and clogged up the navigable channels. The smell was so noxious it drove residents near the lake to move. These problems were resolved by the end of the century, when the lake became a hub on the new Trent-Severn Waterway from Lake Ontario to Lake Huron. However, industries attracted by cheap hydroelectric power, such as General Electric used the lake for disposal of industrial chemicals for many years. The pollutants seems to be mostly contained in the sediment, and the lake is now considered safe for recreational use.

Wikimedia Commons has media related to Stony Lake .
This page is based on this Wikipedia article
Text is available under the CC BY-SA 4.0 license; additional terms may apply.
Images, videos and audio are available under their respective licenses.