Susan Tex "Sue" Green [1] [2] (born August 13, 1953) is an American professional wrestler. She began wrestling at the age of 15 and was trained by The Fabulous Moolah. She was the frequent tag team partner of Sandy Parker, with whom she won the National Wrestling Alliance (NWA)'s NWA Women's World Tag Team Championship. The title reign, however, is unrecognized. In 1975, Green defeated Moolah for the NWA World Women's Championship, which is unrecognized by the NWA. The following year, Green was recognized by Pro Wrestling Illustrated as the Girl Wrestler of the Year. In 1992, she joined the Professional Girl Wrestling Association, holding the promotion's championship and later acting as commissioner.

Green originally got into wrestling when her father took her to wrestling shows by promoter Joe Blanchard. [1] Starting at the age of five, Sue and her dad had the same seats for ten years. [1] After asking Blanchard for years to train her to wrestle, he finally did. [1] At the age of 14, Green's parents met with Texas Governor John B. Connally and signed a release to allow Green to wrestle on the weekends because it did not interfere with school. [1] She had her first match on her 15th birthday in Victoria, Texas against Maria DeLeon. [1] [5] While still in high school, Green wrestled in approximately 40 professional matches. [1]

After graduating from high school, Green went to South Carolina to meet with The Fabulous Moolah, a promoter for female wrestling, who began booking her for matches. [1] By the age of 20, she had toured in both Vietnam and Hong Kong. [1] She later formed a partnership with Sandy Parker, with whom she defeated Donna Christanello and Toni Rose in November 1971 for the NWA Women's World Tag Team Championship. They re-lost the title to Christanello and Rose in February 1972. [5] The title change is unrecognized. [6]

In 1975, Green went to International Wrestling Enterprise in Japan. Green and Peggy Patterson against Chiyo Obata and Kyoko Chigusa. Japanese side Second Terumi Sakura hit the green's back of the head by bucket and Green bloodshed on January 6, 1975 in Korakuen Hall Tokyo, Japan. [7]

Promoter Fritz von Erich had Green defeat The Fabulous Moolah for the NWA World Women's Championship in 1975 during a tour of Texas, but Moolah regained it at the end. [1] The title change was never official. Moolah eventually purchased the legal rights to the belt. When Moolah sold the title to the World Wrestling Federation (WWF), the company disregarded anytime Moolah had lost the belt, making her the first WWF Women's Champion with a 28-year reign. Therefore, the WWF did not recognize Green as having ever defeated Moolah for the title. That same year, Green was voted Pro Wrestling Illustrated's 1976 "Girl Wrestler of the Year". [8] On February 2, 1976 in a shoot match Susan Tex Green put Moolah in a submission hold after being struck in the face and held the woman's championship for several days before being forced by Vince McMahon Sr. to surrender it back. This title reign was not recognized by the WWE. [9]

In 1992, the Professional Girl Wrestling Association (PGWA) was formed after Randy Powell videotaped a match between Green and Judy Martin. [10] On February 23, 1992, at the Ladies Professional Wrestling Association's Super Ladies Showdown, Green was defeated by Denise Storm in the first round of the LPWA Japanese Championship Tournament. She competed in the Women's Pro Wrestling organization in the early 1990s. [11] Meanwhile, back in the PGWA, Green was recognized as the first PGWA Champion and feuded with Martin over the belt. [1] [10] In 1999, Martin defeated Green for the title in a mixed tag team match when Martin's partner pinned Green's partner. [12] Green, however, regained the belt later that year but lost it to Angel Orsini in 2000. In July 1992, Green suffered from a crushed shoulder, so she did not wrestle again until 1996. [5] She suffered another setback in February 2003, when she had knee surgery, putting her out of action again until February 2004 when she had a match with Charolette Webs. [5] In November 2008, she was announced as PGWA's new commissioner. [3] Green works as a wrestling trainer in Columbia, South Carolina. [2]

Green grew up in Corpus Christi, Texas. [1] In high school, she participated in tennis and swimming. [1]

In 1988, she moved to South Carolina to work in the state Department of Corrections. [1] She gave herself the middle name Tex because another woman by the same legal name was bouncing checks, and Green wanted to differentiate herself from her so she would stop being called by the police. [1] By 2004, Green was working as a planning and development services inspector. [1] She also became a professional wrestling trainer in South Carolina. [1] In her "Gym of Pain and Glory", she trains mostly men. [1] Leilani Kai counts Green as a mentor. [1]

Green broke her ribs while working in the planning department in Columbia. [13] The scar tissue from the injury began to spread, and it had to be removed. [13] She had surgery to remove six inches of small intestine and two inches of colon. [13] In early 2008, Green was hospitalized for at least two months with a staph infection that resulted from the previous surgery. [13] [14] She was hospitalized on February 5, 2008, and when doctors were looking at problems in her stomach and intestines, they discovered the infection. [14] The infection caused her to be partially paralyzed on her left side, and in April, she was on a ventilator for four days. [4] [14] She was released from the hospital at the beginning of June, after re-learning how to walk. [4] She then went to Texas to recuperate for a little over two months. [13] By mid-June 2009, however, Green was well enough to participate in a wrestling match. [13]

In July 2016, Green was named part of a class action lawsuit filed against WWE which alleged that wrestlers incurred traumatic brain injuries during their tenure and that the company concealed the risks of injury. The suit is litigated by attorney Konstantine Kyros, who has been involved in a number of other lawsuits against WWE. [15] US District Judge Vanessa Lynne Bryant dismissed the lawsuit in September 2018. [16] 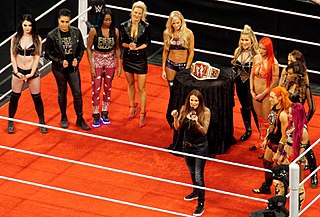 Throughout its history, women have served in various onscreen roles in the American professional wrestling promotion WWE. In the 1990s, WWE introduced the term Diva to refer to its female performers. The term was applied to women who appear as wrestlers, managers or valets, backstage interviewers, or ring announcers. The term was discontinued at WrestleMania 32 on April 3, 2016, when the new Women's Championship was introduced. WWE currently refers to their female talent as Women Superstars or simply Superstars.

Carlene Denise Moore-Begnaud is an American retired professional wrestler and manager, better known by her ring name Jazz. She is currently signed to Impact Wrestling, where she is the manager of Jordynne Grace and Rachael Ellering. She is also known for her tenure in Extreme Championship Wrestling (ECW), and World Wrestling Entertainment (WWE) where she was a two-time WWE Women's Champion. She has also competed for the National Wrestling Alliance, where she held the NWA World Women's Championship for over 900 days. 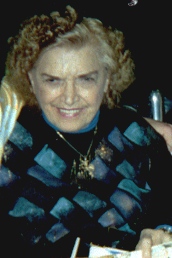 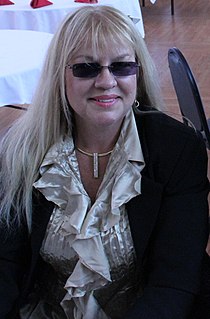 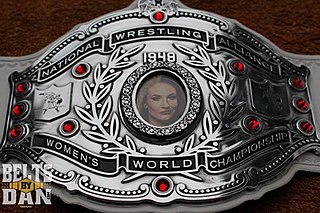 Mary Charlene Noble, known from childhood by her nickname Kay Noble, was an American professional wrestler. Her career spanned from the 1950s to the 1980s, during which time she was known for her toughness in the ring. She worked along well-known female professional wrestlers such as Penny Banner, The Fabulous Moolah, and Gladys Gillem. She also wrestled in mixed tag team matches with partners such as her husband Doug Gilbert and Terry Funk. During her almost thirty years wrestling, she held the Texas Women's Championship, Central States Women's Championship, and AWA World Women's Championship. She was also honored by the Cauliflower Alley Club in 2001, before dying of stomach cancer in April 2006. 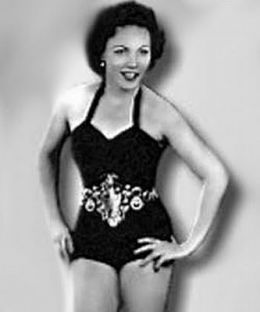 Desiree Petersen is a professional wrestler. She was born in Copenhagen, Denmark and once held the WWF Women's Tag Team Championship.

Betty Wade-Murphy is an American former professional wrestler better known by her ring name Joyce Grable. She was the long-term tag team partner of Wendi Richter. She held the NWA United States Women's Championship once and the NWA Women's World Tag Team Championship four times—twice with Richter and twice with her other tag team partner Vicki Williams.

Sandy Parker is a Canadian retired professional wrestler. She debuted in 1969, wrestling in Canada, the United States, and Japan. In Japan, she worked for All Japan Women's Pro-Wrestling, holding numerous titles. She also had an unofficial NWA Women's World Tag Team Championship reign with partner Sue Green. 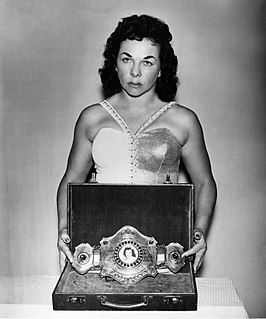