Sylvester Cleofoster Joseph (born September 5, 1978) is a West Indian cricketer who has played in five Tests and 13 ODIs, from 2000 to 2005. He captained the West Indies in one of those ODI games due to the more experienced players being unavailable courtesy of contract disputes. In West Indian domestic cricket he plays for the Leeward Islands.

Against the West Indies B in the Busta Cup of 2001/02, Joseph converted his maiden first class ton for the Leeward Islands into a double century, finishing with 211 not out.

A right-handed middle order batsman, Joseph first joined the national team when they toured Australia in 2000–01. He did not play a Test but did take part in the ODI series, albeit without any success.

In July 2004 he toured England and scored a century against a Sri Lankan A side. He followed it up with 68 in the second innings to put himself in contention for the Tests. After not being selected for the first two Tests he made his debut in the 3rd Test at Old Trafford. He came into the side as a direct replacement for Devon Smith and as a result was asked to open the batting. He made 45 in the first innings and 15 in the second. Opening the batting again in the following Test he failed to impress and had to wait until the tour of Sri Lanka a year later to get a recall.

Joseph is now a regular for West Indies A side and is the current captain of the side. In 2006 he made two centuries for them, both against England A. 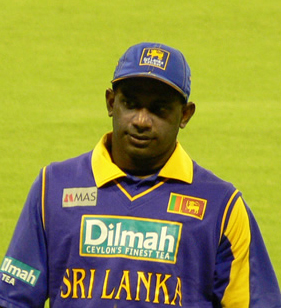 Deshabandu Sanath Teran Jayasuriya is a former Sri Lankan cricketer and a former captain of the Sri Lankan national team. Considered one of the greatest One Day International (ODI) players of all time, Jayasuriya is well known for his powerful striking and match winning all-round performances in ODI cricket. Jayasuriya is credited for having revolutionized one-day international cricket with his explosive batting with Romesh Kaluwitharana in 1996, which initiated the hard-hitting modern day batting strategy of all nations. 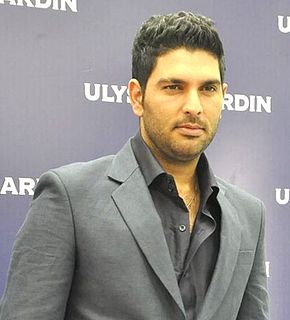 Yuvraj Singh is an Indian international cricketer, who plays all forms of the game. An all-rounder who bats left-handed in the middle order and bowls slow left-arm orthodox, Yuvraj is the son of former Indian fast bowler and Punjabi actor Yograj Singh.

Thilan Thusara Samaraweera is a former Sri Lankan cricketer, who played Tests and ODIs. Samaraweera played international cricket for Sri Lanka as a permanent member in Test squad and is in the side primarily for his solid right-handed batting but is also a capable off spinner. He is the current fielding coach of the Kolkata Knight Riders in the Indian Premier League for 2018.

Saeed Anwar is a former Pakistani cricketer and a former captain for Tests and ODIs. An opening batsman and occasional slow left arm orthodox bowler, Anwar played international cricket between 1989 and 2003.Widely considered as one of the most destructive & one of greatest opening batsmen Pakistan has ever produced, Anwar scored twenty centuries in ODIs, more than any other Pakistani batsmen in this format. He played 55 Test matches, scoring 4052 runs with eleven centuries, average 45.52. In 247 One Day Internationals (ODIs) he made 8824 runs at an average of 39.21. 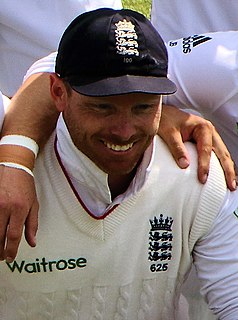 Ian Ronald Bell is an English cricketer who played international cricket in all formats for the England cricket team. He currently plays county cricket for Warwickshire County Cricket Club. He is a right-handed higher/middle order batsman, described in The Times as an "exquisite rapier," who is a very good cover driver on the off side. He is an occasional right-arm medium pace bowler and a slip fielder. He is also noted for his sharp reflexes and often fields in close catching positions. He has scored twenty-two Test centuries and four One Day International (ODI) 100s. In 2015, he became the second player since Ian Botham to be involved in five Ashes series wins.

West Indies cricket team toured Sri Lanka for two Test matches and a ODI tri-series in July and August 2005. West Indies were severely depleted owing to a contract dispute, which led to players like Brian Lara, Chris Gayle and Corey Collymore refusing to play. Thus, Sri Lanka went into the series as even more overwhelming favourites, their strong game at home and West Indies' poor form – with only one Test win in the last ten attempts. And they confirmed their favourite status, winning both Tests in rather emphatic style, although their batting showed worrying weaknesses against West Indian bowlers who bowled with more heart than talent at times.

Louis Rohan Duleep Mendis, known as Duleep Mendis, is a former Sri Lankan cricketer and former captain of the team, who captained Sri Lanka to their first Test series victory in 1985. He was primarily a specialist batsman, whose best period as a player came from 1982 to 1985.

Daren Ganga is a former West Indian cricketer. He is a right-handed top order batsman and part-time right-arm offbreak bowler. After debuting as a 19-year-old he has found himself in and out of the West Indian cricket team, playing regularly for and at times captaining the West Indies A side when he was not selected. After being named the 2006 West Indies Players' Association 'Test player of the year', Ganga had for the first time in his career cemented his spot in the side and when captain Ramnaresh Sarwan injured his shoulder in the second Test of their 2007 tour of England, the West Indies Cricket Board turned to Ganga to captain the side for the remainder of the series. Ganga has previously had a chance to hone his leadership from captaining the Trinidad and Tobago and the West Indies Under-23 teams. He can also bowl off spin but he is mainly a batsman.

Denesh Ramdin is a Trinidadian cricketer of Indian descent who plays internationally for the West Indies. He is a right-handed wicketkeeper-batsman. 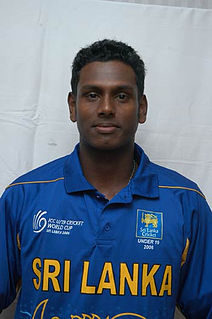 Angelo Davis Mathews,, is a professional Sri Lankan cricketer and a former captain in all formats. He was a part of the Sri Lankan team that won the 2014 ICC World Twenty20 and the team that made the final of the 2011 Cricket World Cup and 2012 ICC World Twenty20.He was the last captain to win Asia Cup for Sri Lanka in 2014

Shikhar Dhawan is an Indian international cricketer. A left-handed opening batsman and an occasional right-arm off break bowler, he plays for Delhi in domestic cricket and Delhi Capitals in the IPL. He played for the Indian Under-17 and Under-19 teams before making his first-class debut for Delhi in November 2004. At the 2015 World Cup, he was the leading run-scorer for India and in the following year, became the fastest Indian to reach 3,000 ODI runs. In December 2017, he became the 2nd fastest Indian to reach 4000 ODI runs. Dhawan also holds the record for most runs in a calendar year in Twenty20 International cricket (689).

Christopher Roger "Chris" Woakes is an English cricketer who plays for Warwickshire and England. He is a right-handed batsman and a right-arm fast-medium pace bowler. He topped Warwickshire's 2008 county bowling averages, and was selected for the England Lions squad as well as the preliminary 2009 ICC World Twenty20 championship. He made his Test debut against Australia in the fifth Ashes Test in 2013.

Joseph Edward Root is an English international cricketer who is the current captain of the England Test team. He also represents Yorkshire domestically. He is often regarded as one of the best batsmen in the world. He now predominantly fields at first slip. He is currently ranked fourth in Test batting and fourth in ODI batting rankings according to the ICC Player Rankings, having previously been ranked the best Test batsman. 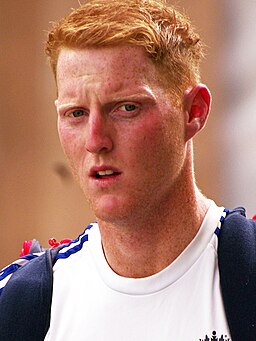 Benjamin Andrew Stokes is an English international cricketer and former vice-captain of the England Test team. Born in Christchurch, New Zealand, Stokes moved to northern England at the age of 12, where he learnt the game and began playing club cricket for local teams. He is an all-rounder who bowls right-arm fast-medium pace, and bats left-handed.

Deshabandu Pinnaduwage Aravinda de Silva is a former Sri Lankan cricketer and former captain. He has also played in English county cricket. Widely considered as one of the greatest batsmen ever produced by Sri Lanka, De Silva helped Sri Lanka to win the 1996 Cricket World Cup and brought Sri Lanka from underdog status to present day form. He has held various posts in Sri Lanka Cricket after his retirement in 2003.

Krishna Kumar Dinesh Karthik is Indian wicket-keeper-batsman who made his debut for the Indian cricket team in 2004.