The wicket-keeper in the sport of cricket is the player on the fielding side who stands behind the wicket or stumps being watchful of the batsman and ready to take a catch, stump the batsman out and run out a batsman when occasion arises. The wicket-keeper is the only member of the fielding side permitted to wear gloves and external leg guards. [1] The role of the keeper is governed by Law 27 of the Laws of Cricket. [1]

Initially, during the bowling of the ball the wicket-keeper crouches in a full squatting position but partly stands up as the ball is received. Australian wicket-keeper Sammy Carter (1878 to 1948) was the first to squat on his haunches rather than bend over from the waist (stooping). [2]

The keeper's major function is to stop deliveries that pass the batsman (in order to prevent runs being scored as 'byes'), but he can also attempt to dismiss the batsman in various ways:

A keeper's position depends on the bowler: for fast bowling he will squat some distance from the stumps, in order to have time to react to edges from the batsman, while for slower bowling, he will come much nearer to the stumps (known as "standing up"), to pressure the batsman into remaining within the crease or risk being stumped. The more skilled the keeper, the faster the bowling to which he is able to "stand up", for instance Godfrey Evans often stood up to Alec Bedser. [3]

Like the other players on a cricket team, keepers will bat during the team's batting innings. At elite levels, wicket-keepers are generally expected to be proficient batters, averaging considerably more than specialist bowlers. See Wicket-keeper-batsman.

Law 27.2, which deals with the specifications for wicketkeepers' gloves, states that:

Substitutes were previously not allowed to keep wicket, but this restriction was lifted in the 2017 edition of the Laws of Cricket.

This rule was sometimes suspended, by agreement with the captain of the batting side. For example, during the England–New Zealand Test match at Lord's in 1986, England's specialist keeper, Bruce French, was injured while batting during England's first innings. England then used four keepers in New Zealand's first innings: Bill Athey kept for the first two overs; 45-year-old veteran Bob Taylor was pulled out of the sponsor's tent to keep for overs 3 to 76; Bobby Parks, the Hampshire keeper, was called up for overs 77 to 140; and Bruce French kept wicket for the final ball of the innings. [4]

Arthur Jones was the first substitute to keep wicket in a Test match, when he did so against Australia at The Oval in 1905. [5]

Playing without a wicket-keeper

There is no rule stating a team must play a wicket-keeper. [6] On 5 June 2015 during a T20 Blast game between the Worcestershire Rapids and the Northamptonshire Steelbacks, Worcestershire chose not to play a wicket-keeper in the 16th over of the match. [7] Their keeper, Ben Cox, became an extra fielder at fly slip while spinner Moeen Ali bowled. [7] The umpires consulted with each other and agreed that there was nothing in the rules to prevent it from happening. [8]

The following are the top 10 wicket-keepers by total dismissals in Test cricket. [9]

The following are the top wicket-keepers by total dismissals in one day cricket. [10]

The following are the top 10 wicket-keepers by total dismissals in Twenty20 International cricket. [11] 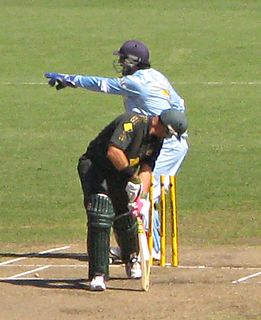 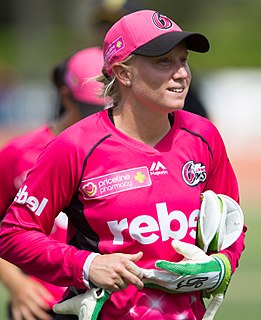 Alyssa Jean Healy is an Australian cricketer who plays for the Australian women's national team and New South Wales in domestic cricket, as well as the Sydney Sixers in the WBBL. She made her international debut in February 2010. 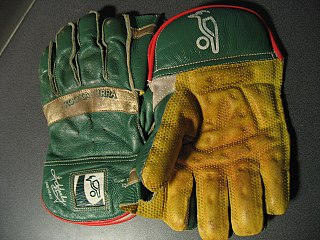