China News was founded on 6 June 1949 in Taipei by James Wei, [3] a journalist with close ties to the KMT and former employee of the Ministry of Information. [4] : 1858  The newspaper was established to cater for foreign residents and the local population in Taiwan. [4] : 1858  At the time it was the only English-language daily newspaper in Taiwan and it was a newspaper published in the afternoon. Later on,in order to compete with its new competitor,China News had to change and was published in the morning in order not to lose its advertisements. [1]

In 1960,the newspaper switched to block printing in a full-size page format. [2]

Wei left the newspaper in 1965. Wei was also a Reuters correspondent and deputy director of the Central News Agency. During his later years he was the sixth Director of the Government Information Office,serving from October 31,1966,to June 1,1972. Wei was a close advisor to Chiang Ching-kuo. [5] [6]

China News ran into financial difficulties in 1996 and received capital injection from I-Mei Foods,but the management of the newspaper was unchanged. [4] : 1858  In May 1999,I-Mei Foods acquired 50 percent stake in the newspaper for NTD$60 million (US$1.8 million). [3] The newspaper's name was changed to Taiwan News to reflect the newspaper's new focus on readers in Taiwan and to avoid confusion with China Daily and China News Service. [3] After the change in ownership,Taiwan News increased its page count and lowered staff wages. [7] [3] Under the ownership of I-Mei Foods,Simone Wei became the newspaper's chairperson and I-Mei CEO Kao Chih-ming became the publisher. [8]

By 1998,63 percent of Taiwan News' readership were local readers and the rest were businesspeople,diplomats,academics,teachers and students from outside Taiwan. [9] : 149  Former editor Anthony Lawrance said in 2001 that Taiwan News mainly republished wire stories and had few articles with original reporting due to a lack of financial resources to hire English-speaking journalists and produce good translations from Chinese news articles,the high turnover of foreign editorial staff and the absence of an English speaking environment in Taiwan. [4] : 1859

Under the ownership of I-Mei Foods,which is strongly associated with the Taiwanese identity,Taiwan News changed its editorial stance from being pro-KMT to being in favor of the Pan-Green coalition and Taiwan independence. [1] [4] : 1858  According to former editor Anthony Lawrance,Taiwan News opposes autocracies and the People's Republic of China. [4] : 1858  In the late 1990s,Taiwan News rejected Chinese unification as advocated by the KMT and associations of Taiwan with the People's Republic of China under the "one country,two systems" principle. [4] : 1858 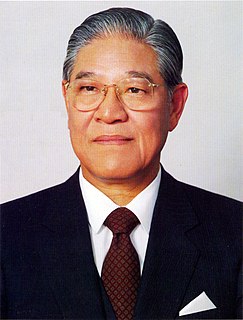 Lee Teng-hui was a Taiwanese statesman and economist who served as President of the Republic of China (Taiwan) under the 1947 Constitution and chairman of the Kuomintang (KMT) from 1988 to 2000. He was the first president to be born in Taiwan,the last to be indirectly elected and the first to be directly elected. During his presidency,Lee oversaw the end of martial law and the full democratization of the ROC,advocated the Taiwanese localization movement,and led an ambitious foreign policy to gain allies around the world. Nicknamed "Mr. Democracy",Lee was credited as the president who completed Taiwan's transition to the democratic era.

The Taipei Times is the only printed daily English-language newspaper in Taiwan,and the third established there. Online competitors include the state-owned Focus Taiwan and Taiwan News;The China Post was formerly a competitor but today is mostly non-operational. Established on 15 June 1999,the Taipei Times is published by the Liberty Times Group,which also publishes a Chinese-language newspaper,the Liberty Times,Taiwan's biggest newspaper by circulation,with a pro–Taiwan independence editorial line. 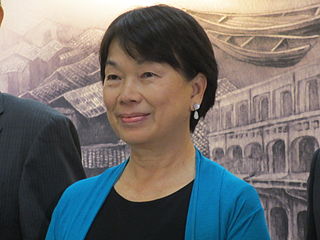 Lung Ying-tai is a Taiwanese essayist and cultural critic. She occasionally writes under the pen name 'Hu Meili'. Lung's poignant and critical essays contributed to the democratization of Taiwan and as the only Taiwanese writer with a column in major mainland Chinese newspapers,she is a writer in Mainland China. Described as a "public intellectual of the Chinese-speaking world",she spent 20 years based outside Taiwan in the US and Germany where became widely known for her criticism of the Kuomintang's martial law regime. She has since become a critic of Mainland China's increasing restrictions on press freedom and civil liberties. She has written more than 30 books.

Censorship in Taiwan was greatly relaxed when the state moved away from authoritarianism in 1987. Since then,the media has generally been allowed to broadcast political opposition. Today,the focus of censorship is slander and libel,cross-Strait relations,and national security.

Cross-Strait relations are the relations between China and Taiwan.

The mass media in Taiwan is considered to be one of the freest and most competitive in Asia. Cable TV usage is high and there is also a wide selection of newspapers available covering most political viewpoints.

Radio Taiwan International is the English name and call sign of the international radio service,the Central Broadcasting System (CBS) of the Republic of China,commonly known as Taiwan. It is a government-owned station that broadcasts in 14 languages around the world,with a majority emphasis on Mandarin and Taiwanese-language broadcasts over shortwave into Mainland China. 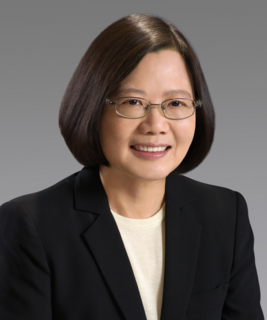 Tsai Ing-wen is a Taiwanese politician and academic who is the current President of the Republic of China (Taiwan) since 2016. A member of the Democratic Progressive Party (DPP),Tsai is the first female president of Taiwan. She has served as chair of the DPP since 2020,and previously from 2008 to 2012 and 2014 to 2018.

The Central Daily News was the official newspaper of the Kuomintang and is one of the world's oldest Chinese-language newspapers,having been in circulation since 1928. The Kuomintang made the decision to temporarily cease publication of the newspaper effective June 1,2006,because it could no longer subsidize the newspaper's snowballing debts,which had amounted to around NT$ 800 million,almost twice the overall assets of the party. It is now a dedicated online publication available to Taiwanese and Chinese readers in both Taiwan and Mainland China,written in both traditional and simplified Chinese. Relations between both sides of the Taiwan Strait are one of the most important topics,as well as business.

Taiwan Journal is an English-language weekly newspaper published by the Government Information Office of the Republic of China (Taiwan). The newspaper,with both print and online editions,is published every Friday,51 issues per year,with National Day and occasional special editions. 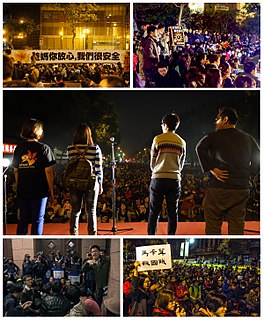 The Sunflower Student Movement is associated with a protest movement driven by a coalition of students and civic groups that came to a head between March 18 and April 10,2014,in the Legislative Yuan and,later,also the Executive Yuan of Taiwan. The activists protested the passing of the Cross-Strait Service Trade Agreement (CSSTA) by the then ruling party Kuomintang (KMT) at the legislature without clause-by-clause review.

The Independence Evening Post was a Chinese-language newspaper founded by Wu San-lien,which was published in Taiwan from 1947 to 2001. For most of its existence,the publication was supportive of the tangwai movement and Democratic Progressive Party. 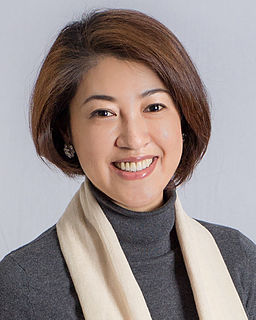 Hsu Shu-hua is a Taiwanese politician,serving as a legislator representing Nantou County as a Kuomintang (KMT) member.

Chang Li-shan (Chinese:張麗善;pinyin:Zhāng Lìshàn;Wade–Giles:Chang1 Li4-shan4;born 1 January 1964) is a Taiwanese politician. She served on the Legislative Yuan from 2005 to 2008,and again from 2016 to 2018,when she was elected magistrate of Yunlin County. 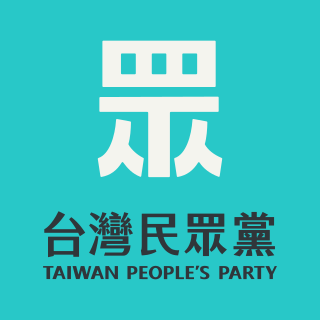 The Taiwan People's Party is a political party in Taiwan,formally established on 6 August 2019 by Ko Wen-je,who serves as its first and current chairman.

Liu Ping-wei was a Taiwanese politician. He was first elected to the Taiwan Provincial Assembly in 1981 and served continuously until 1998. Liu assumed the speakership of the provincial assembly between 1994 and 1998,and sat for a single term in the Legislative Yuan from 1999 to 2002.