Tetrahedron is a weekly peer-reviewed scientific journal covering the field of organic chemistry. According to the Journal Citation Reports , the journal has a 2014 impact factor of 2.641. [1] Tetrahedron and Elsevier, its publisher, support an annual symposium. [2] In 2010, complaints were raised over its high subscription cost. [3]

As of 22 June 2013 [update] , the Web of Science lists ten papers from Tetrahedron that have more than 1000 citations. The four articles that have been cited more than 2000 times are:

The Perkin reaction is an organic reaction developed by English chemist William Henry Perkin that is used to make cinnamic acids. It gives an α,β-unsaturated aromatic acid by the aldol condensation of an aromatic aldehyde and an acid anhydride, in the presence of an alkali salt of the acid. The alkali salt acts as a base catalyst, and other bases can be used instead. 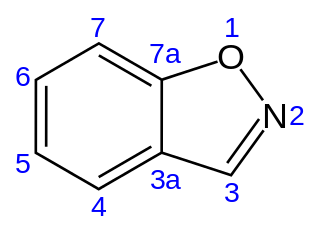 1,2-Benzisoxazole is an aromatic organic compound with a molecular formula C7H5NO containing a benzene-fused isoxazole ring structure. The compound itself has no common applications; however, functionalized benzisoxazoles and benzisoxazoyls have a variety of uses, including pharmaceutical drugs such as some antipsychotics (including risperidone, paliperidone, ocaperidone, and iloperidone) and the anticonvulsant zonisamide.

The Étard reaction is a chemical reaction that involves the direct oxidation of an aromatic or heterocyclic bound methyl group to an aldehyde using chromyl chloride. For example, toluene can be oxidized to benzaldehyde.

Pivalic acid is a carboxylic acid with a molecular formula of (CH3)3CCO2H. This colourless, odiferous organic compound is solid at room temperature. A common abbreviation for the pivalyl or pivaloyl group (t-BuC(O)) is Piv and for pivalic acid (t-BuC(O)OH) is PivOH.

The Guerbet reaction, named after Marcel Guerbet (1861–1938), is an organic reaction that converts a primary alcohol into its β-alkylated dimer alcohol with loss of one equivalent of water. The process is of interest because it converts simple inexpensive feedstocks into more valuable products. Its main disadvantage is that the reaction produces mixtures.

Henri Boris Kagan is currently an Emeritus Professor at the Université Paris-Sud in France. He is widely recognized as a pioneer in the field of asymmetric catalysis. His discoveries have had far-reaching impacts on the pharmaceutical industry.

The Barton reaction, also known as the Barton nitrite ester reaction, is a photochemical reaction that involves the photolysis of an alkyl nitrite to form a δ-nitroso alcohol.

Michael E. Jung is a Professor of Chemistry in the Department of Chemistry and Biochemistry at the University of California at Los Angeles.

The Birch reduction is an organic reaction that is used to convert arenes to cyclohexadienes. The reaction is named after the Australian chemist Arthur Birch. In this organic reduction of aromatic rings in liquid ammonia with sodium, lithium, or potassium and an alcohol, such as ethanol and tert-butanol. This reaction is unlike catalytic hydrogenation, which usually reduces the aromatic ring all the way to a cyclohexane.

Desulfonylation reactions are chemical reactions leading to the removal of a sulfonyl group from organic compounds. As the sulfonyl functional group is electron-withdrawing, methods for cleaving the sulfur-carbon bonds of sulfones are typically reductive in nature. Olefination or replacement with hydrogen may be accomplished using reductive desulfonylation methods.

Organocerium compounds are chemical compounds that contain one or more chemical bond between carbon and cerium. Organocerium chemistry is the corresponding science exploring properties, structure and reactivity of these compounds. In general, organocerium compounds are not isolable, and are rather studied in solution via their reactions with other species. There are notable exceptions, such as the Cp*3Ce(III) complex shown at right, but they are relatively rare. Complexes involving cerium of various oxidation states are known: though lanthanides are most stable in the +3 state, complexes of cerium(IV) have been reported. These latter compounds have found less widespread use due to their oxidizing nature, and the majority of literature regarding organometallic cerium complexes involves the +3 oxidation state. In particular, organocerium compounds have been developed extensively as non-basic carbon nucleophiles in organic synthesis. Because cerium is relatively non-toxic, they serve as an "environmentally friendly" alternative to other organometallic reagents. Several reviews detailing these applications have been published.

In organic chemistry, the Fráter–Seebach alkylation is a diastereoselective alkylation of chiral beta-hydroxy esters using strong bases. The reaction was first published by Georg Fráter in 1979; in 1980, Dieter Seebach reported about a similar reaction with malic acid ester.

The Tetrahedron Computer Methodology was a short lived journal that was published by Pergamon Press to experiment with electronic submission of articles in the ChemText format, and the sharing source code to enable reproducibility. It was the first chemical journal to be published electronically, with issues distributed in print and on floppy disks. It is likely it was also the first journal to accept submissions in a non-paper format. The journal ceased publication owing to technical and non-technical reasons, and may have lacked sufficient institutional support. The last issue appeared in 1992 but was dated 1990.

The Journal of Magnetic Resonance (JMR) is a monthly peer-reviewed scientific journal that publishes original research in the field of magnetic resonance, including nuclear magnetic resonance, electron paramagnetic resonance, magnetic resonance imaging and nuclear quadrupole resonance. Since 2011, its editor-in-chief has been Lucio Frydman of the Weizmann Institute of Science. According to the Journal Citation Reports, it has an impact factor of 2.432. Authors can pay a fee to have their articles published as open access.