The Bells is a 1926 American silent crime film directed by James Young, starring Lionel Barrymore and Boris Karloff. [1] It was based on an 1867 French stage play called Le Juif Polonais (The Polish Jew) by Erckmann-Chatrian. The play was translated to English in 1871 by Leopold Lewis at which time it was retitled The Bells . The English version of the play was performed in the U.S. in the 19th century by Sir Henry Irving. Le Juif Polonais was also adapted into an opera of the same name in three acts by Camille Erlanger, composed to a libretto by Henri Cain. [2] [3]

The play was adapted into a number of film adaptations; an Australian film in 1911 directed by W. J. Lincoln, [4] a 1913 American film directed by Oscar Apfel, [5] a 1918 American film The Bells (1918 film) directed by Ernest C. Warde, [6] a 1925 British-Belgian film (aka Le juif polonais) directed by Harry Southwell, [7] the 1926 Hollywood film starring Lionel Barrymore and Boris Karloff, and a British film in 1931 which starred Donald Caltrop as Mathias. Harry Southwell remade the film again later in Australia as The Burgomeister (1935). [8] [9]

Footage from The Bells (1926) was re-used in two short films: The Mesmerist, and Light Is Calling by Bill Morrison.

Mathias, an innkeeper with several other businesses, seeks to be burgomaster of a small Austrian hamlet. In order to gain favor with local leaders, he offers food and alcohol on credit, but often refuses to collect, much to the dismay of his wife Catharine. Mathias is deeply in debt to Frantz, who seeks Mathias' businesses. He will forgive the debt if Mathias allows him to marry his daughter, Annette. Mathias refuses, and is worried about the debt which will come due soon.

One evening a Polish Jew enters Mathias' inn. The man displays a money belt filled with gold, which Mathias, having had much to drink with the man, eyes closely. When the man leaves in a blizzard, Mathias pursues and kills him; before he dies, the man shakes a set of horse bells at him. Having come into money through murder, Mathias pays off his debt, provides a dowry for his daughter to marry, and is elected burgomaster. However, he is haunted by the sound of bells and hallucinations of the man he killed. The man's brother comes and offers a reward, bringing a "mesmerist" to help find the murderer. Mathias is pursued by the mesmerist and his own guilt throughout the rest of the film. He suffers hallucinations and nightmarish dreams of the murdered man until the final reel, in which he confesses his crime aloud to the ghost, then collapses, dead.

William Henry Pratt, better known by his stage name Boris Karloff, was an English actor who starred as Frankenstein's monster in the horror film Frankenstein (1931), which established him as a horror icon. He reprised the role in Bride of Frankenstein (1935) and Son of Frankenstein (1939). Karloff also appeared as Imhotep in The Mummy (1932), and voiced the Grinch, as well as narrating the animated television special of Dr. Seuss' How the Grinch Stole Christmas! (1966), which won him a Grammy Award. 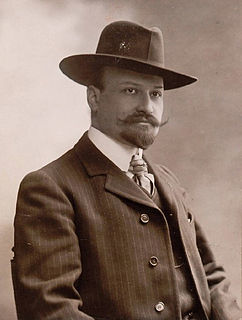 Camille Erlanger was a French opera composer. He studied at the Paris Conservatory under Léo Delibes (composition), Georges Mathias (piano), as well as Émile Durand and Antoine Taubon (harmony). In 1888 he won the Prix de Rome for his cantata Velléda. His most famous opera, Le Juif polonais, was produced at the Opéra-Comique in 1900.

The Bells may refer to: 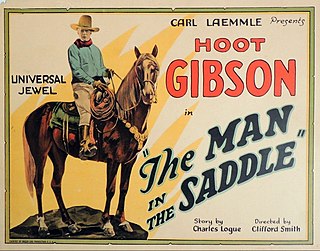 The Man in the Saddle is a lost 1926 American silent Western film directed by Lynn Reynolds and Clifford Smith, starring Hoot Gibson and featuring Boris Karloff. 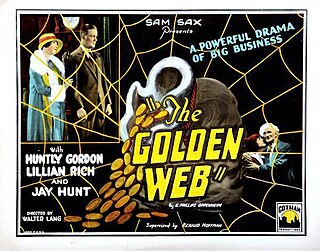 The Golden Web is a lost 1926 American silent mystery film directed by Walter Lang and starring Lillian Rich, Huntley Gordon and Lawford Davidson. The cast also features Boris Karloff before he established himself as a horror star. It is based on the 1910 novel The Golden Web by the British writer E. Phillips Oppenheim. A previous British film adaptation of the novel was produced in 1920.

The Eagle of the Sea is a 1926 American silent drama film directed by Frank Lloyd, starring Florence Vidor and featuring Boris Karloff in an uncredited role. Incomplete prints of the film exist.

The Sea Bat is a 1930 American pre-Code melodrama thriller film directed by Lionel Barrymore and Wesley Ruggles, starring Raquel Torres, Charles Bickford and featuring Boris Karloff. Part of the film was filmed on location in Mazatlán, Mexico. The film was originally intended as a vehicle for Lon Chaney, but he was too ill from throat cancer to undertake the project and died on August 26, 1930. The film concerns a community of sponge divers who are harassed by a large and hostile manta ray.

The Yellow Ticket is a 1931 pre-Code American drama film based on the 1914 play of the same name by Michael Morton, produced by the Fox Film Corporation, directed by Raoul Walsh, and starring Elissa Landi, Lionel Barrymore and Laurence Olivier. Boris Karloff appears briefly in a small supporting role. The picture is also a noteworthy example of productions from the pre-Code era in that it includes brief nudity. 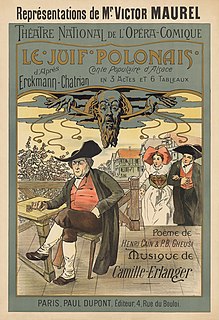 Le Juif polonais is a 1900 opera in three acts by Camille Erlanger composed to a libretto by Henri Caïn.

Fifty-Fifty is a 1925 American silent drama film starring Hope Hampton, Lionel Barrymore, and Louise Glaum. Directed and produced by Henri Diamant-Berger for the production company Encore Pictures, Fifty-Fifty is a remake of a 1916 Norma Talmadge film also titled Fifty-fifty that was directed by Allan Dwan, who wrote the original story. 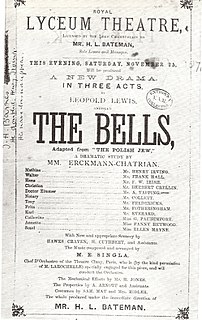 The Bells is a play in three acts by Leopold David Lewis which was one of the greatest successes of the British actor Henry Irving. The play opened on 25 November 1871 at the Lyceum Theatre in London and initially ran for 151 performances. Irving was to stage the play repeatedly throughout his career, playing the role of Mathias for the last time the night before his death in 1905.

The Burgomeister is a 1935 Australian film directed by Harry Southwell based on the 1867 play Le juif polonais by Erckmann-Chatrian, adapted into English in 1871 by Leopold Lewis, previously filmed a number of times. The Burgomeister (1935) is considered a 'substantially lost' film, with only one sequence surviving.

The Bells is a 1911 Australian feature-length silent film directed by W. J. Lincoln. It is based on the famous stage melodrama by Erckmann-Chatrian, adapted by Leopold Lewis, which in turn had been adapted for the Australian stage by W. J. Lincoln before he made it into a film.

The Bells is a 1931 British drama film directed by Harcourt Templeman and Oscar Werndorff and starring Donald Calthrop, Jane Welsh, and Edward Sinclair.

The Bells is a lost 1918 American silent drama film released by Pathé Exchange. It was adapted from the 1867 French play Le Juif Polonais by Erckmann-Chatrian and an 1871 English-language version, The Bells, by Leopold Lewis. The latter was a favorite vehicle for actor Henry Irving. This silent film stars Frank Keenan and Lois Wilson. The story was remade in 1926 as The Bells with Lionel Barrymore and Boris Karloff.

The Polish Jew is a 1931 French historical drama film directed by Jean Kemm and starring Harry Baur, Mady Berry and Simone Mareuil. It is based on the 1867 play of the same name by Alexandre Chatrian and Emile Erckmann.

Wikimedia Commons has media related to The Bells (1926 film) .
This page is based on this Wikipedia article
Text is available under the CC BY-SA 4.0 license; additional terms may apply.
Images, videos and audio are available under their respective licenses.