The Hard Way is a 1943 Warner Bros. musical drama film directed by Vincent Sherman and starring Ida Lupino. The film was based on a story by Irwin Shaw which was reportedly based on Ginger Rogers' relationship with her first husband, Jack Pepper (whom she married in 1928 at age 17) and her own mother, Lela. [2]

Helen Chernen (Ida Lupino) is an ambitious woman, determined to escape poverty. She pushes her younger sister Katie (Joan Leslie) into a marriage with singer/dancer Albert Runkel (Jack Carson). Katie has no interest in the man, but is desperate to leave the poor conditions that she and her sister live in, in a dirty steel town. Runkel's partner Paul Collins (Dennis Morgan) realizes Helen's deeper intentions and tries to stop her from breaking Runkel's heart.

Now living in wealthier surroundings, Helen tries to make a start on Katie's career. After showcasing her in Runkel's act, she is able to put her in a Broadway production. Katie soon becomes a successful singer and actress, and Collins and Runkel's act flounders. Runkel can't bear being away from his wife on tour and refuses to live off her earnings or even use his wife's name to promote himself. He eventually commits suicide.

Meanwhile, Katie's popularity goes to her head, and she becomes a wild party girl, losing an important opportunity. She later meets with Paul, who is now a successful band leader. He falls in love with Katie, and they start a relationship. However, Katie is forced to choose between him and appearing in Helen's first play. She chooses the play over Paul, who has asked her to marry him, and he leaves. Before the play, Paul comes to see Katie to wish her luck, but Helen runs him off and the sisters fight over the motivation for Katie's success.

During the play, Katie forgets lines and has to be cued several times before collapsing in the middle of the production. Later that evening, after recovering from her collapse, Katie tells Helen that she never wants to see her again. Paul appears and the two profess their love for each other.

Both Bette Davis and Ginger Rogers initially were offered the role of Helen, but both declined. Ida Lupino was cast. Shaw wanted Howard Hawks or William Wyler to direct the film, but because they were busy with other projects, producer Jerry Wald hired Vincent Sherman. Portions of a documentary film by Pare Lorentz were used to represent the mining town of Green Hill. To achieve a more realistic feel during the scenes that took place in Green Hill, neither Lupino nor Leslie wore makeup. The film's first and last scenes were added at Jack L. Warner's insistence that Lupino appear more glamorous in the opening scene. [ citation needed ]

Ida Lupino was awarded a New York Film Critics Circle Award for Best Actress for her role in the film. 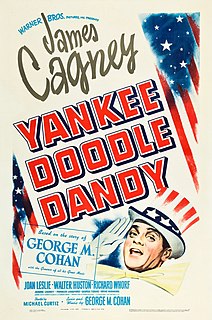 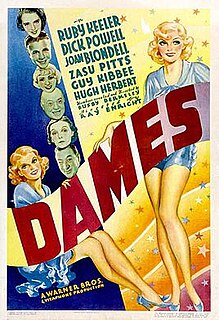 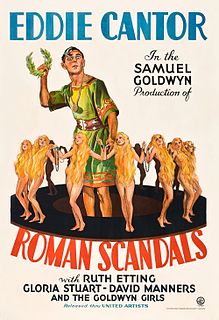 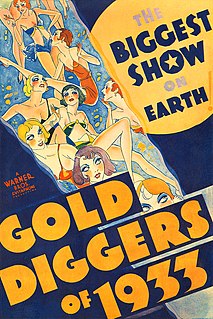 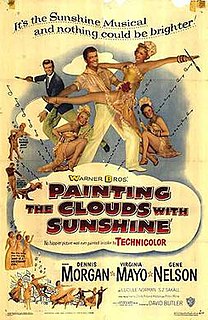 Thank Your Lucky Stars is a 1943 American musical comedy film made by Warner Brothers as a World War II fundraiser, with a slim plot involving theater producers. The stars donated their salaries to the Hollywood Canteen, which was founded by John Garfield and Bette Davis, who appear in this film. It was directed by David Butler and stars Eddie Cantor, Dennis Morgan, Joan Leslie, Edward Everett Horton and S.Z. Sakall. 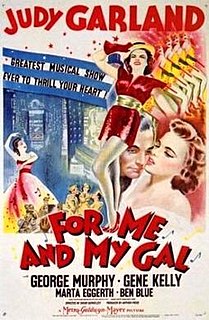 Where Do We Go from Here? is a 1945 romantic musical comedy-fantasy film directed by Gregory Ratoff and starring Fred MacMurray, Joan Leslie, June Haver, Gene Sheldon, Anthony Quinn and Fortunio Bonanova. It was produced by Twentieth Century-Fox. Joan Leslie's singing voice was dubbed by Sally Sweetland. 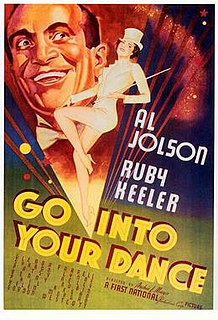 Go into Your Dance is a 1935 American musical drama film starring Al Jolson, Ruby Keeler, and Glenda Farrell. The film was directed by Archie Mayo and is based on the novel of the same name by Bradford Ropes. It was released by Warner Bros. on April 20, 1935. An irresponsible Broadway star gets mixed up with gambling and gangsters.

Moulin Rouge is an American pre-Code musical film released on January 19, 1934, by United Artists, starring Constance Bennett and Franchot Tone. It contained the songs "Coffee in the Morning and Kisses in the Night", and "Boulevard of Broken Dreams" with music by Harry Warren and lyrics by Al Dubin. Lucille Ball appears in an uncredited role as a show girl in the film. It has no relation to any other films of/with the same name. The cast also includes Tullio Carminati, Helen Westley, Russ Brown, Hobart Cavanaugh and Georges Renavent. 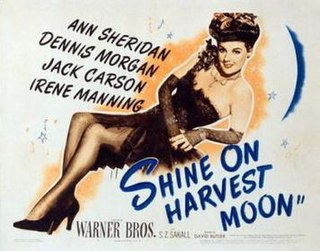 Shine on Harvest Moon, starring Ann Sheridan and Dennis Morgan, is a 1944 musical–biographical film of the vaudeville team of Nora Bayes and Jack Norworth who wrote the popular song "Shine On, Harvest Moon". The film was directed by David Butler. Ann Sheridan's singing voice was dubbed by Lynn Martin.

Wikimedia Commons has media related to The Hard Way (film) .
This page is based on this Wikipedia article
Text is available under the CC BY-SA 4.0 license; additional terms may apply.
Images, videos and audio are available under their respective licenses.