The Hi-Lo's were a vocal quartet formed in 1953, who achieved their greatest fame in the late 1950s and 1960s. The group's name is a reference to their extreme vocal and physical ranges (Bob Strasen and Bob Morse were tall, Gene Puerling and Clark Burroughs were short). [1]

They were occasionally supported by Frank Sinatra. Clare Fischer was their pianist for years and occasionally wrote arrangements for the group. [1]

The Hi-Lo's recorded the theme song to the 1956 television series Noah's Ark . They were also featured on the soundtrack of the motion picture Everything's Ducky (1961), contributing three songs: "Everything's Ducky," "Moonlight Music" and "The Scuttlebutt Walk." They also made numerous appearances on television and had many live performances. The first group that had the Hi-Lo's name was a Barbershop quartet out of Wisconsin. None of those original members were in Gene Puerling's group which started some years later, Barbershop Harmony Society. [2]

In 1966, Puerling and Shelton, together with Bonnie Herman and Len Dressler, formed another vocal group, The Singers Unlimited. [1] This group gave a wide range for Puerling's arrangements, for the four singers multi-tracked as many as 16 voices. For that reason The Singers Unlimited were exclusively a recording group.

Bob Strasen died February 28, 1994, and Bob Morse on April 27, 2001. Afterward, Puerling, Shelton and Burroughs still appeared very occasionally as the Hi-Lo's in and around Southern California. Shelton is an accomplished reed player and has played in Clare Fischer's bands. Clark Burroughs is semi-retired and can sometimes be heard on film soundtracks.

The Hi-Lo's and especially their innovative use of vocal harmony, were an influence on the groups and musicians Take 6, [3] The King's Singers, The Manhattan Transfer, Chanticleer, The Free Design, Herbie Hancock, [4] and Brian Wilson. [5] 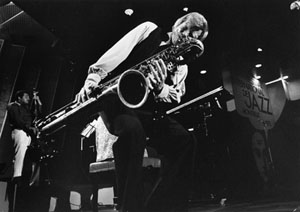 Gerald Joseph Mulligan was an American jazz saxophonist, clarinetist, composer and arranger. Though Mulligan is primarily known as one of the leading jazz baritone saxophonists – playing the instrument with a light and airy tone in the era of cool jazz – he was also a significant arranger, working with Claude Thornhill, Miles Davis, Stan Kenton, and others. Mulligan's pianoless quartet of the early 1950s with trumpeter Chet Baker is still regarded as one of the best cool jazz groups. Mulligan was also a skilled pianist and played several other reed instruments. Several of his compositions, such as "Walkin' Shoes" and "Five Brothers", have become jazz standards. 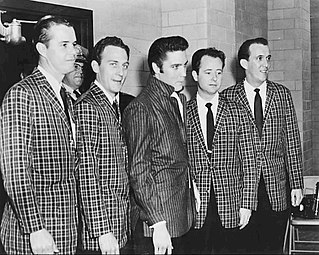 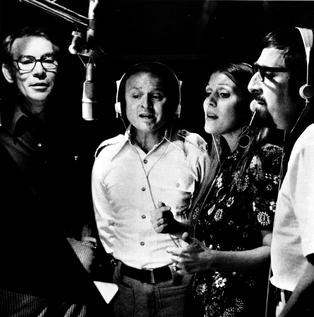 Lena Corinne "Lee" Morse was an American jazz and blues singer-songwriter, composer, guitarist, and actress. Morse's greatest popularity was in the 1920s and early 1930s as a torch singer, although her career began around 1917 and continued until her death in 1954. 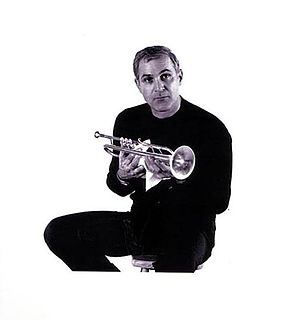 Pete Candoli was an American jazz trumpeter and the brother of trumpeter Conte Candoli. He played with the big bands of Woody Herman, Stan Kenton, and many others, and worked extensively in the studios of the recording and television industries.

Don Elliott Helfman was an American jazz trumpeter, vibraphonist, vocalist, and mellophone player. His album Calypso Jazz is considered by some jazz enthusiasts to be one of the definitive calypso jazz albums. Elliott recorded over 60 albums and 5,000 advertising jingles throughout his career.

Eugene Thomas Puerling was a vocal performer and vocal arranger. He was born in Milwaukee, Wisconsin. Puerling created and led the vocal groups The Hi-Lo's and The Singers Unlimited. He was awarded a Grammy Award for Best Vocal Arrangement for Two or More Voices in 1982 for his arrangement of "A Nightingale Sang in Berkeley Square". A Latin song he arranged for Singers Unlimited, "One More Time, Chuck Corea," inspired by Chuck Mangione and Chick Corea, has been adapted and used by marching bands, drum and bugle corps and jazz ensembles. He died just six days before his 79th birthday, due to complications from diabetes. 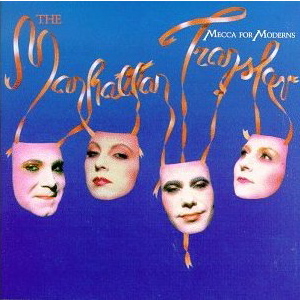 Mecca for Moderns is the sixth studio album by The Manhattan Transfer. It was released in 1981 by Atlantic Records. 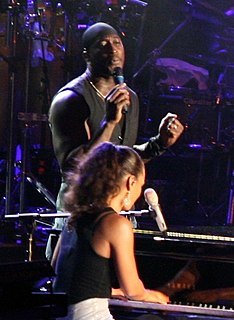 Jermaine Paul is an American singer. He was the winner of the second season of The Voice. Prior to his The Voice stint, he was co-nominated at the 48th Grammy Awards for Best R&B Performance by a Duo or Group with Vocals, in a collaborative work with Alicia Keys as the featured artist. 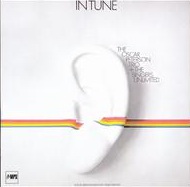 In Tune is a 1971 studio album by The Oscar Peterson Trio and The Singers Unlimited. 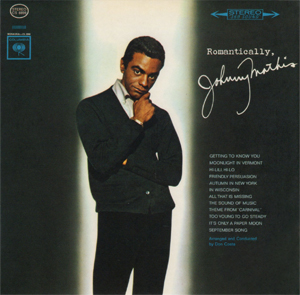 Romantically is an album by American pop singer Johnny Mathis that was released on November 18, 1963, by Columbia Records and was also the final original studio album recorded by Mathis for the label prior to his moving to Mercury Records. Mathis had recorded exclusively for Columbia from 1956 to 1963. After a brief stint with Mercury, he returned to Columbia in 1967. His first Mercury project, Sounds of Christmas, was actually released six weeks before this one, on October 4.

This Time It's Love is an album made by the American vocal group, The Hi-Lo's, with an orchestral accompaniment arranged and conducted by Clare Fischer, recorded and released on the Columbia label in 1962 as CL 1723 (mono)/CS 8523 (stereo).

The Four Voices were a 1950s vocal harmony quartet based in Tennessee that issued a succession of singles on Columbia Records.

This is the discography for American jazz musician Clare Fischer. 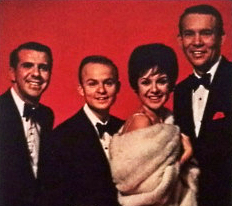 The J's with Jamie was an American musical group specializing in commercial jingles in the 1950s and 1960s. The group's core members were Jamie and Joe Silvia, a married couple who played with a number of session musicians and other singers. They worked within the booming mid-20th century Chicago advertising industry in both radio and television with clients including well-known food companies, politicians, appliance manufacturers, and industry associations. The couple declined invitations to go on tour, opting to stay in Chicago with their family, but did record three albums for Columbia Records, including a combination of original songs and covers of standards and Broadway show tunes. At the 6th Annual Grammy Awards in 1964, The J's with Jamie were nominated in two categories: Best New Artist and Best Performance by a Vocal Group. Shortly before disbanding in 1967 to found a commercial production firm, the Silvias released another two albums as Jamie and the J. Silvia Singers.