The Host is a 2020 English-language mystery crime thriller film produced in the Netherlands by Pearl Pictures Productions. The film is directed by Andy Newbery and produced by Zachary Weckstein, both of whom are making their feature film debut. [1] The Host is the story of a London banker who seizes the opportunity to change his mundane life by taking a risk with his employer's money. A series of events leads him to travel to Amsterdam, a city of dark secrets where all is not as it seems. Driven by power players, drugs, seduction, and violence, the film portrays a deadly game of choice and consequence. [2]

Robert Atkinson (Mike Beckingham, younger brother of Simon Pegg [3] ), a bank employee, is left feeling worthless after an afternoon fling with his boss's wife. The same day, he closes a lucrative deal with a bank client, placing the money in a safety deposit box. Robert plans to use the money to turn his life around but he succumbs to one of his various vices instead, and proceeds to gamble all the money away, while borrowing even more. Unaware that he is under surveillance, Robert is approached by a stranger, Lau Hoi Ho (Togo Igawa), at a gambling hall. Ho offers to pay off his debts, under the condition that Robert agrees to transport a briefcase from London to Amsterdam. Finding himself in a desperate situation and attracted by the offer, Robert agrees to the deal. [4]

US DEA agent Herbert Summers (Nigel Barber), who is seated next to Robert on his flight to Amsterdam, reveals his true identity and discloses that he is on the trail of Triad leader Lau Hoi Ho. Robert is placed in a compromised position and forced to assist the DEA in Ho's capture. After arriving at his hotel, Robert finds out that it is overbooked and his room is no longer available. The hotel manager, Gerrie (Reinout Bussemaker), summons a favour from Vera Tribbe (Emmy Award winner Maryam Hassouni), who happens to have a room available nearby. Robert and Gerrie proceed to Vera's house, unaware of being followed by the Chinese mafia. After settling in, Robert makes Vera's acquaintance and they seem to develop a fondness for each other. From here, events spiral out of control. Robert goes missing and his brother Steve (Dougie Poynter) goes searching for him. DEA agent Summers is enmeshed in the shadowy waterways of Amsterdam as he follows the thread of his investigation to the story's final denouement. [5]

Principal photography on The Host began in March 2018 on location in a historic Amsterdam canal mansion. The film was shot in numerous locations around London and Amsterdam over five weeks, and completed in September 2018. Producer Zachary Weckstein stated, "Both Amsterdam and London have their own unique beauty. Holland is really welcoming to filmmakers...we were surrounded by unique architecture, skies..." [6] The production budget was kept under a million euros.

British Jamaican R&B and soul singer Ruby Turner was hired to write and perform a theme song for the film. The result was "Chasing Love". [7] The score was composed by Wan Pin Chu. [8]

The Host premiered at the May Fair Hotel in London on 6 January 2020. The film had both its theatrical and VoD/streaming first release in North America on 17 January 2020 by Vertical Entertainment. [9]

The review consensus at Rotten Tomatoes for The Host had 25% of critics recommending the film, based on 16 reviews and an average rating of 3.70 out of 10. [10] Morning Star billed it as Film of the Week. [11] Evening Standard commented on Oona Menges' work: "the cinematography is glorious. Covent Garden could be Rome, as Oona Menges spins soft sunbeams into cinematic gold." [12] 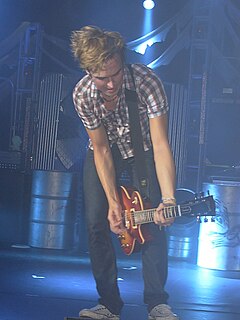 Thomas Michael Fletcher is an English musician, singer, composer, author, and YouTube vlogger. He is one of the lead vocalists and rhythm guitarist of English pop rock band McFly, in addition to being the group's founder. He originally auditioned and was accepted into the band Busted before losing out on the place after the record label Island decided the band should be a trio rather than a four-piece. However, he still carried on writing with the band. In his thirteen-year career as a professional songwriter, Fletcher has penned ten UK number one singles and twenty-one top ten singles. He is credited as having written songs for One Direction, Busted, the Vamps and 5 Seconds of Summer.

Shannon Emery Lee is an American actress, martial artist and businesswoman. She is the only daughter of martial arts film star Bruce Lee and retired martial arts teacher Linda Lee Cadwell, the granddaughter of Cantonese opera singer Lee Hoi-chuen, and the younger sister of Brandon Lee. 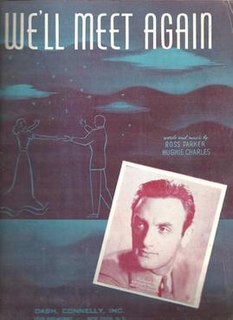 "We'll Meet Again" is a 1939 British song made famous by singer Vera Lynn with music and lyrics composed and written by English songwriters Ross Parker and Hughie Charles. The song was published by Michael Ross Limited, whose directors included Louis Carris, Ross Parker and Norman Keen. Keen, an English pianist also collaborated with Parker and Hughie Charles on "We'll Meet Again" and many other songs published by the company, including "There'll Always Be an England" and "I'm In Love For The Last Time". The song is one of the most famous of the Second World War era, and resonated with soldiers going off to fight as well as their families and sweethearts.

The Poynter Institute for Media Studies is a non-profit journalism school and research organization located in St. Petersburg, Florida. The school is the owner of the Tampa Bay Times newspaper and the International Fact-Checking Network, and operates PolitiFact.

Heroes of the East, also known as Challenge of the Ninja, Shaolin vs. Ninja and Shaolin Challenges Ninja is a martial arts film produced in 1978. It starred Gordon Liu and was directed by Lau Kar-Leung. Lau Kar-Leung has a cameo role as So Chan, a master of Zui Quan. It's notable for portraying Japanese martial arts alongside the more typical kung fu used in most Hong Kong martial arts films.

Project A Part II is a 1987 Hong Kong action film starring and directed by Jackie Chan, who also writer with Edward Tang, who also producer with Raymond Chow, Leonard Ho and David Lam. It is the sequel to the 1983 film Project A. Jackie Chan plays Sergeant Dragon Ma once again, Sammo Hung and Yuen Biao, stars from the original film, are absent. The film was released on 19 August 1987. 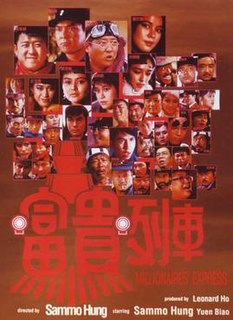 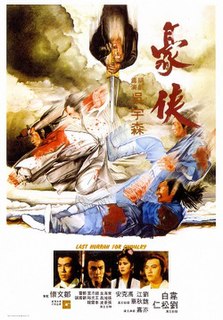 Last Hurrah for Chivalry is a 1979 Hong Kong martial arts film written and directed by John Woo, who also producer with Raymond Chow. The film stars Damian Lau and Wei Pai. The film is a precursor to Woo's heroic bloodshed films. The film was released on 11 November 1979.

Joseph Lau Luen Hung is a Hong Kong billionaire. He owns a 61% stake in Chinese Estates Holdings and his fortune is estimated by Forbes at $17.4 billion as of July 2020. He is a convicted felon and fugitive in Macau. 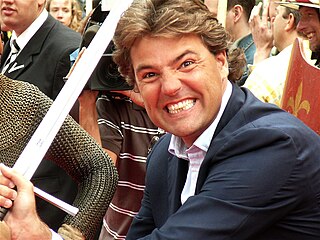 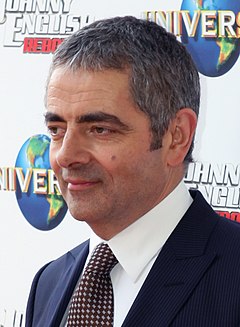 Rowan Sebastian Atkinson is an English actor, comedian, and writer. He is best known for his work on the sitcoms Blackadder (1983–1989) and Mr. Bean (1990–1995). Atkinson first came to prominence in the BBC sketch comedy show Not the Nine O'Clock News (1979–1982), receiving the 1981 BAFTA for Best Entertainment Performance, and via his participation in The Secret Policeman's Ball (1979). His other work includes the James Bond film Never Say Never Again (1983), playing a bumbling vicar in Four Weddings and a Funeral (1994), voicing the red-billed hornbill Zazu in The Lion King (1994), and playing jewellery salesman Rufus in Love Actually (2003). Atkinson also featured in the BBC sitcom The Thin Blue Line (1995–1996). His work in theatre includes the 2009 West End revival of the musical Oliver!. 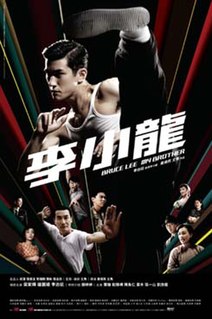 Bruce Lee, My Brother is a 2010 Hong Kong biographical martial arts drama film directed by Raymond Yip, and also written, produced and directed by Manfred Wong, and also storied, produced and narrated by Bruce Lee's real life younger brother Robert Lee. Starring Aarif Rahman as Lee, Tony Leung Ka-fai and Christy Chung as Lee's parents, the film is based on the life of Bruce Lee in his teenage years to part of his adult years.

Mark Charles Edward Wright is an English television personality, entertainment reporter, and professional footballer currently playing for League Two side Crawley Town. He is best known for appearing as a cast member on the first three series of The Only Way Is Essex. Wright gained more popularity after appearing on the eleventh series of I'm a Celebrity...Get Me Out of Here! where he finished as runner-up, and the twelfth series of Strictly Come Dancing, where he finished in fourth place. 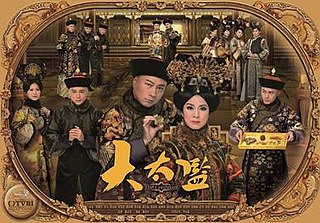 "Love Is Easy" is a song by English pop rock band McFly which serves as the lead single from their second greatest hits album, Memory Lane: The Best of McFly. The song was written by McFly members Tom Fletcher, Danny Jones and Dougie Poynter as well as Antony Brant. Its music video was released on 24 October 2012, showing the band performing the song in a stage show that makes references to moments throughout their career. 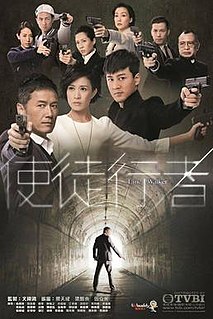 Zachary Weckstein is an American film producer based in the Netherlands. He is the founder of Pearl Pictures Productions, an independent film production company launched in 2017. Weckstein's first feature film, The Host, was released in 2020. It is the first English-language Dutch feature film distributed worldwide.