The Northern Argus, first published on 19 February 1869, is a newspaper printed in Clare, South Australia. It was later sold to Rural Press, previously owned by Fairfax Media, but now an Australian media company trading as Australian Community Media.

The Northern Argus newspaper (as distinct from the Southern Argus published in Strathalbyn) was founded by Alfred Clode and his brother-in-law [1] Henry Hammond Tilbrook (c. 1848– 9 September 1937). The first issue was greeted with polite silence by other newspapers, most saying nothing more than it was "the same size as the Wallaroo Times ". The Kapunda Herald observed that it had been produced under difficulties, and would refrain from criticism. [2]

The Blyth Agriculturist (6 November 1908 - 25 June 1969) was begun as an offshoot of the Northern Argus newspaper and ran until 1969, covering news for Blyth and nearby regions. [8]

Like other Rural Press publications, the newspaper is also available online. [9]

Issues from Vol.1 No.1 of 19 February 1869 to Vol.LXXXV No.5832 of 22 December 1954 have been OCR digitised from photographic copies by the National Library of Australia and may be retrieved using Trove. 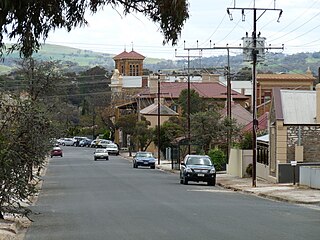 Kapunda is a town on the Light River and near the Barossa Valley in South Australia. It was established after a discovery in 1842 of significant copper deposits. The population was 2,917 at the 2016 Australian census.

Rev. Ridgway William Newland, frequently spelled "Ridgeway", was an English Congregationalist minister who with his large family emigrated to the young colony of South Australia, where he had a considerable influence in the Encounter Bay district. Many of his descendants were important in the history of the State. He has been called "The father of the South".

The Bunyip is a weekly newspaper, first printed on 5 September 1863, and originally published and printed in Gawler, South Australia. Its distribution area includes the Gawler, Barossa, Light, Playford, and Adelaide Plains areas. Along with The Murray Pioneer, The River News, and The Loxton News,The Bunyip was now owned by the Taylor Group of Newspapers and printed in Renmark.

The Southern Argus is a newspaper first published from March 1866 in Port Elliot, South Australia, and then in Strathalbyn from 1868 to the present. It is published on Thursdays.

James Pearce was a South Australian businessman and politician based in Kapunda.

Captain Samuel White Sweet was an English sea captain who settled in Australia in 1864, and was involved in the early colonization of the Northern Territory. After the grounding of his ships Gulnare and Wallaroo, for both of which he was held culpable, he turned his interest in photography from a serious hobby and part-time occupation to a profession. Sweet was a pioneer of Australian landscape photography as an art form, and kept abreast of technical advances in the medium.

Henry Hammond Tilbrook (1848–1937) was a Welsh-born Australian landscape photographer, inventor and traveller, who later in life co-founded the Northern Argus newspaper in the Clare region of South Australia.

Samuel Dennison was an Australian politician. He represented the South Australian House of Assembly multi-member seat of Wooroora from 1930 to 1938 for the Country Party and its successor the Liberal and Country League.

Charles Kimber was an orchardist, flour miller and politician in colonial South Australia.

South Australian Mining Association was a no-liability company which established several mines in South Australia, notably the "Grey Wheal", or north mine at Burra, which made a fortune for its promoters, the "Snobs", while the adjacent southern claim, by the Princess Royal Company ("Nobs") proved worthless.

The District Council of Julia was a local government area in South Australia from 1874 to 1932. The council seat was located at Hampden.

Gilbert Rotherdale McMinnCE, SM, was an Australian surveyor born in Ireland noted for his work in the Northern Territory surveying the Overland Telegraph Line. His middle name is occasionally spelt "Rutherdale".

Thomas Hamilton Ayliffe MD was a medical doctor whose family were early settlers of South Australia, remembered in several place names, namely Ayliffe's Crossing and Ayliffe Hill, which is skirted by Ayliffe's Road.

The Herald is a weekly newspaper published in Tanunda, South Australia. With its earliest beginnings in 1860, it has been published under the Herald banner since 2005. It was later sold to Rural Press, previously owned by Fairfax Media, but now an Australian media company trading as Australian Community Media.

James Hazel Adamson was a machinist and inventor, better known for his paintings and engravings of marine subjects in the early days of colonization of South Australia.

Henry Binney Hawke, usually referred to as H. B. Hawke, was an industrialist in Kapunda, South Australia, founder of the manufacturing business which became H. B. Hawke & Co.