The Burra Record was a newspaper covering Burra and the mid-north eastern area of South Australia that was first printed in June 1876. In 1977, it merged with the Review-Times to form the Review-Times-Record, which in turn became The Flinders News in 1989.

Most issues published between July 1878 and January 1954 are freely available online, via Trove. [1]

The Burra Record [2] [1] began life as the Northern Mail which was first published on 30 June 1876 for distribution in Kooringa. [3] After 26 weekly issues, in 1877, it was renamed to Burra News and Northern Mail. [4] After another 77 issues, the newspaper was then purchased by Frederick Holder, future Premier of South Australia, in June 1878. Schoolmaster Holder, newly married and about to become a father, had missed out on the position in charge of the new Burra Model School. He was forced to look for other work, and took over a local store, selling books, wallpapers, and homeopathic medicines. He also became Town Clerk and bought the Record from Henry Pether.

The newspaper was then called The Record, subtitled "a paper for the Burra and north-east" (5 July 1878 - 27 September 1878), continuing previous publication order. From Friday, 4 October 1878, it was renamed The Burra Record. [5] Initially the main newspaper was run by a committee. Holder was managing editor, but three colleagues scrutinised the subject matter. Holder was successful in the new venture, and was one of many newspaper owners who followed their political views in print by standing for Parliament. Holder also organised another publication, the North Eastern Times and Terowie News (7 January 1881 - 29 December 1882) before selling it to a partner. In 1887 Holder was elected the member for Burra, continuing to run the main newspaper until 1891. In 1892 he became premier, having sold the Burra Record to William Jenkin Davey.

The Burra Record continued until March 1977 when, with the Review Times, the newspaper was merged to form the Review-Times-Record . At the time of its demise, the Burra Record was run by R.E. and A.J. Angel. 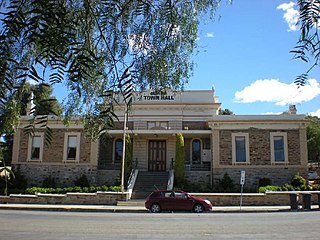 Burra is a pastoral centre and historic tourist town in the mid-north of South Australia. It lies east of the Clare Valley in the Bald Hills range, part of the northern Mount Lofty Ranges, and on Burra Creek. The town began as a single company mining township that, by 1851, was a set of townships collectively known as "The Burra". The Burra mines supplied 89% of South Australia's and 5% of the world's copper for 15 years, and the settlement has been credited with saving the economy of the struggling new colony of South Australia. The Burra Burra Copper Mine was established in 1848 mining the copper deposit discovered in 1845. Miners and townspeople migrated to Burra primarily from Cornwall, Wales, Scotland and Germany. The mine first closed in 1877, briefly opened again early in the 20th century and for a last time from 1970 to 1981. 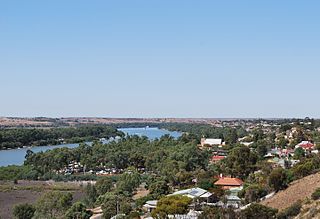 William Paxton was a South Australian colonist who arrived in the Province of South Australia in 1840, became one of the investors in the Burra copper mines and returned to England in July 1855, as a wealthy man.

The Times and Northern Advertiser was a weekly newspaper published in Peterborough, South Australia from August 1887 to 1970.

The District Council of Burra Burra was a local government area in South Australia from 1935 to 1997.

The Transcontinental is a weekly newspaper published in Port Augusta, South Australia which dates from October 1914. It was later sold to Rural Press, previously owned by Fairfax Media, but now an Australian media company trading as Australian Community Media.

The Corporate Town of Burra was a local government area in South Australia from 1876 to 1969.

The District Council of Burra was a local government area in South Australia from 1872 to 1935.

The Adelaide Chronicle was an early publication in Adelaide, the capital of the then colony of South Australia. It was published between 1839 and 1842, when it ceased publication as a result of the economic depression caused by the mass exodus of workers to the Victorian goldfields.

The Pictorial Australian was a monthly illustrated paper published in South Australia by the Frearson Brothers, Samuel and Septimus, who were printers located on King William Street and Grenfell Street, Adelaide. The publication evolved over time, both in terms of name, publication frequency, and content.

The Eyre Peninsula Tribune was a weekly newspaper published in Cleve, South Australia, founded in late 1910 and published from March 1911 to April 9, 2020. From 1911 to 1950 it was titled Eyre's Peninsula Tribune, reflecting a time when South Australia's peninsulas were referred to using possessives. It was later sold to Rural Press, previously owned by Fairfax Media, but now an Australian media company trading as Australian Community Media.

The Port Lincoln Times is a newspaper published twice-weekly in Port Lincoln, South Australia. It was first printed in August 1927, and has been published continuously ever since. It was later sold to Rural Press, previously owned by Fairfax Media, but now an Australian media company trading as Australian Community Media.

The Flinders News is a weekly newspaper published in Port Pirie, South Australia, formed from the historic mergers of multiple Mid-North publications and representing a combined ancestry of 12 former publications. Its earliest constituent publication, the Northern Mail, was first issued on 30 June 1876, and the newspaper has been published under its current title since 1989. It was later sold to Rural Press, previously owned by Fairfax Media, but now an Australian media company trading as Australian Community Media.

The Loxton News was a weekly newspaper published in Loxton, South Australia, and published continuously between April 1960 and April 2020.