The Story of Marie Powell: Wife to Mr. Milton

The Story of Marie Powell: Wife to Mr. Milton, by Robert Graves, 1943, is a 1943 historical novel based on a true story, the life of the young wife of poet John Milton. Graves tells it from her viewpoint and paints an unflattering portrait of Milton.

Robert von Ranke Graves, known as Robert Graves, was a British poet, historical novelist, critic, and classicist. His father was Alfred Perceval Graves, a celebrated Irish poet and figure in the Gaelic revival; they were both Celticists and students of Irish mythology. Graves produced more than 140 works. Graves's poems—together with his translations and innovative analysis and interpretations of the Greek myths; his memoir of his early life, including his role in World War I, Good-Bye to All That; and his speculative study of poetic inspiration, The White Goddess—have never been out of print. 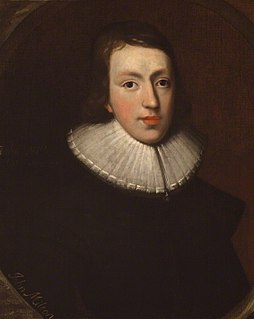 John Milton was an English poet, polemicist, man of letters, and civil servant for the Commonwealth of England under its Council of State and later under Oliver Cromwell. He wrote at a time of religious flux and political upheaval, and is best known for his epic poem Paradise Lost (1667), written in blank verse.

In addition to Milton and Marie, real historical characters included in the story include Edmund Verney, who is depicted as Marie's true love. [1]

Sir Edmund Verney was an English soldier who fought on the Royalist side during the English Civil War.

Summarising the novel for the Carcanet edition, Simon Brittan wrote that:

"Graves regards [Milton] as one of the heinous monsters in the English poetic pantheon. Certainly his Mrs Milton is ill-used by a distended genius. Milton's first wife was sixteen when they married. Milton was after her dowry and when it did not follow he proved a domineering prig, unresponsive to her sensuousness or her down-to-earth wit. It was a spiritual misalliance, too: her Catholicism sorted ill with his beliefs. The dramatic political and military events of the English civil war touch her life at every point, and we witness the execution of Charles I close up. The depiction of everyday life at the time and the merciless portrait of the young Milton, are spell-binding." [2]

Geoffrey Wall concluded that Graves's Wife to Mr. Milton is 'a relentlessly effective satire on masculine self-regard.' [3] Matthew Adams has recently written, 'Ignoring the question of whether Milton had justly or unjustly been defamed, E.M. Forster pronounced Wife to Mr Milton a thumping good read yet remained concerned that Graves's portrait had depicted only half of the man, [... ]' [4] It has been noted that the English poet W.H. Auden liked to quote from Graves's Wife to Mr. Milton: "They tune the strings a little sharper at Cambridge." [5]

On a harsher note, James Macleod Sandison has reprimanded Graves's account of Milton: 'Before leaving the anti-Miltonists, I feel compelled to deplore Robert Graves' Wife to Mr. Milton: it is an unfortunate book which might do much to deepen the erroneous impression of Milton as a surly and narrow-minded puritan.' [6] In Graves's defence Ian McCormick has argued that 'The satiric reduction is a necessary one, for it appears to be part of a larger uneasiness in the text concerning the self-aggrandizement of the reasoning subject that might result in the straitjacket of the purely systematic or, at worst, the totalitarian ideologies of the modern period.' [7] This novel therefore shares a characteristic that McCormick has also identified in Graves's Antigua, Penny, Puce: 'Ultimately, Graves aetheticises history, politics and gender. there is a sportive element at work in his fiction which resists a permanent anchor.' [8]

The novel was republished in 2003 as part of the 'Millennium Graves' edition. More recently, Penguin Classics have published another edition of Graves, Robert. Wife to Mr Milton. (2012)

Love and Mr Lewisham is a 1900 novel set in the 1880s by H. G. Wells. It was among his first fictional writings outside the science fiction genre. Wells took considerable pains over the manuscript and said that "the writing was an altogether more serious undertaking than I have ever done before." He later included it in a 1933 anthology, Stories of Men and Women in Love. 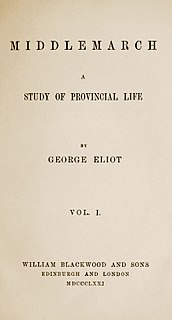 Middlemarch, A Study of Provincial Life is a novel by the English author George Eliot, first published in eight instalments (volumes) in 1871–72. The novel is set in the fictitious Midlands town of Middlemarch during 1829–32, and follows several distinct, intersecting stories with a large cast of characters. Issues include the status of women, the nature of marriage, idealism, self-interest, religion, hypocrisy, political reform, and education. Despite comic elements, Middlemarch is a work of realism encompassing historical events: the 1832 Reform Act, the beginnings of the railways, and the death of King George IV and succession of his brother, the Duke of Clarence. It incorporates contemporary medicine and examines the reactionary views of a settled community facing unwelcome change. Eliot began writing the two pieces that would form Middlemarch in the years 1869–70 and completed the novel in 1871. Although initial reviews were mixed, it is now seen widely as her best work and one of the great novels in English. 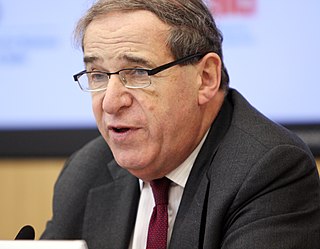 Leon Brittan, Baron Brittan of Spennithorne, was a British politician, Conservative Member of Parliament, and barrister, as well as a member of the European Commission. He served several ministerial roles in Margaret Thatcher's government, including Home Secretary.

Frank Raymond "F. R." Leavis was a British literary critic of the early-to-mid-twentieth century. He taught for much of his career at Downing College, Cambridge, and later at the University of York.

Puce is a dark red or purple brown color, a brownish purple or a "dark reddish brown."

Stevie Davies is a Welsh novelist, essayist and short story writer. She was elected a fellow of the Royal Society of Literature in 1998, and is also a fellow of the Welsh Academy. Her novel The Element of Water was longlisted for the Booker Prize in 2001, and won the Wales Book of the Year in 2002.

The fifth season of the American drama/adventure television series Highlander began airing 23 September 1996 and finished on 19 May 1997. The series continues to follow the adventures of Duncan MacLeod, a 400-year-old Immortal who can only die if he is beheaded. MacLeod is involved in the Game, an ongoing battle during which all Immortals have to behead each other until only one is left. 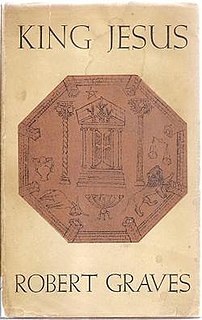 King Jesus is a semi-historical novel by Robert Graves, first published in 1946. The novel treats Jesus not as the Son of God, but rather as a philosopher with a legitimate claim to the Judaean throne through Herod the Great, as well as the Davidic monarchy; and treats numerous Biblical stories in an unorthodox manner.

X, A Quarterly Review, often referred to as X magazine, was a British review of literature and the arts published in London which ran for seven issues between 1959 and 1962. It was co-founded and co-edited by Patrick Swift and David Wright.

Patrick McGuinness is a British academic, critic, novelist, and poet. He is Professor of French and Comparative Literature at the University of Oxford, where he is Fellow and Tutor at St Anne's College.

Take Over is an unpublished 1970 James Bond novel purportedly written by Ian Fleming six years after his death. Spy author Donald McCormick believes this "remarkable story" is perhaps Ian Fleming's strangest legacy. In 1970 a retired bank officer and his daughter who have never been identified claimed to have transcribed works from the "great yonder" by deceased authors. None of the works has ever been published.

The Schlegel-Tieck Prize for German Translation is a literary translation prize given by the Society of Authors in London. It is named for August Wilhelm Schlegel and Ludwig Tieck who translated Shakespeare to German in the 19th century. Translations from the German original into English are considered for the prize. The value of the prize is £3,000.