Roy was born in the suburbs surrounding Philadelphia and raised in Hatboro, Montgomery County, Pennsylvania. [1]

Roy moved to New York City to pursue an acting career. [1] He stated in a 2008 interview with the Lancaster Intelligencer Journal that he, "always had to worry about the last job being my last job ever...All actors worry about that" [1]

Roy has also done voice over and live radio acting.

"I have a safety net now...And what's great is that just before getting the callback for 'Romans,' I was going to go into semi retirement — but then I was asked to audition. I'm still marketable as an actor.," said Roy in the same 2008 interview. [1]

Roy was in the 2009 dark comedy film The Answer Man . He played an alcoholic father who welcomes back his son, played by Taylor Pucci, who returns home from drug rehab. [1] Roy commented on his role that "My character is a drunk, but likable. The tone is light and altruistic. I just loved the script." [1]

Roy currently resides in Lebanon, Pennsylvania. [1] He has a wife and son. [1]

H & M Hennes & Mauritz AB (H&M) is a Swedish multinational clothing company headquartered in Stockholm. Its focus is fast-fashion clothing for men, women, teenagers, and children. As of November 2019, H&M operates in 74 countries with over 5,000 stores under the various company brands, with 126,000 full-time equivalent positions.

ThinkGeek is an American retailer that caters to computer enthusiasts and "geek culture". Described as a "Sharper Image for sysadmins", their merchandise has been likened to "toys for adults, novelties designed to appeal to both your inner child and your inner grad student." These include clothing, electronic and scientific gadgets, unusual computer peripherals, office toys, pet toys, child toys, and caffeinated drinks and candy. ThinkGeek was founded in 1999, was based in Fairfax, Virginia, and is owned by Geeknet, a unit of GameStop.

A Google Doodle is a special, temporary alteration of the logo on Google's homepages intended to commemorate holidays, events, achievements, and notable historical figures of particular countries. The first Google Doodle honored the 1998 edition of the long-running annual Burning Man event in Black Rock City, Nevada, and was designed by co-founders Larry Page and Sergey Brin to notify users of their absence in case the servers crashed. Early Marketing employee Susan Wojcicki then spearheaded subsequent Doodles, including an alien landing on Google and additional custom logos for major holidays. Google Doodles were designed by an outside contractor until 2001, when Page and Brin asked public relations officer Dennis Hwang to design a logo for Bastille Day. Since then, a team of employees called "Doodlers" have organized and published the Doodles.

Kathryn Felicia Day is an American actress, writer, and web series creator. She is the creator, star, writer, and producer of the original web series The Guild (2007–2013), a show loosely based on her life as a gamer. She also wrote and starred in the Dragon Age web series Dragon Age: Redemption (2011). Day was a member of the board of directors of the International Academy of Web Television beginning December 2009 until the end of July 2012.

Jason Jordan Segel is an American actor, comedian, screenwriter, singer-songwriter, author, and producer. He is best known for his role as Marshall Eriksen in the CBS sitcom How I Met Your Mother, as well as for his work with director and producer Judd Apatow on the television series Freaks and Geeks and Undeclared, and for the critically successful comedies in which he has starred, written, and produced.

3OH!3 is an American electronic music duo from Boulder, Colorado, made up of Sean Foreman and Nathaniel Motte. They are best known for their single "DONTTRUSTME" from their album Want, which reached number seven on the Billboard Hot 100. Their second single, a remix of "Starstrukk" featuring Katy Perry from Want, was a top ten hit in the United Kingdom, Ireland, Finland, Poland, and Australia. They gained further recognition by featuring Kesha on the song "My First Kiss", which was made the lead single from their album Streets of Gold. The album later peaked at number seven on the Billboard 200. 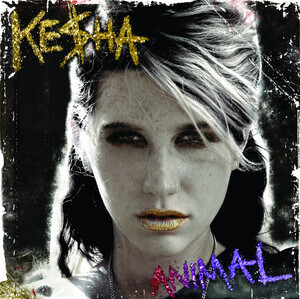 Animal is the debut studio album by American singer and songwriter Kesha. The album was released on January 1, 2010, through RCA Records and distributed through Sony Music Entertainment. Kesha worked on the album with a variety of record producers and songwriters such as Lukasz "Dr. Luke" Gottwald, Benny Blanco, David Gamson, Greg Kurstin, Max Martin and others. Kesha had been recording demos for several years when one eventually ended up in the hands of Samantha Cox, senior director of writer/publisher relations at BMI. Cox passed along the demo and it ended up in the hands of Gottwald, who decided to have Kesha perform on the song "Right Round" with American rapper Flo Rida. Within two months, the song became a hit in multiple countries around the world. The event led to Kesha being sought after by many major labels, and she eventually signed a multi-album deal with RCA Records. 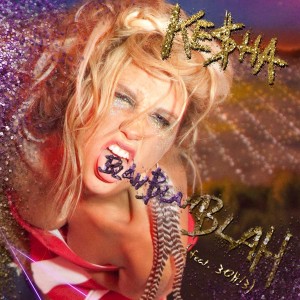 "Blah Blah Blah" is a song by American recording artist Kesha from her debut album, Animal (2010). Produced by Benny Blanco, and co-written by Kesha, Blanco, Neon Hitch and Sean Foreman, it was released as the album's second single on January 29, 2010, and features 3OH!3. Initial writing of the song took place when Kesha, Blanco, Hitch and Foreman were discussing which sex talked more and which one was more "obnoxious." The song is a midtempo electropop song that speaks of men in the same way that they have talked about women in the music industry. The lyrics depict a woman who would rather have sex than listen to a man speak and features blatant come-ons throughout the song.

Steven Adam Markowitz, better known by his stage name Hoodie Allen, is an American rapper, singer and songwriter from Plainview, New York. After graduating from the University of Pennsylvania, he began working at Google before ultimately quitting to pursue a music career full-time. In 2012, he released his first official EP titled All American which debuted at No. 10 on the Billboard 200. In October 2014, Hoodie officially released his debut studio album, People Keep Talking which was successful with first week sales of over 30,000 along with a debut position of No. 8 on the Billboard 200. Hoodie followed up on his success in January 2016 and released his second studio album, Happy Camper. 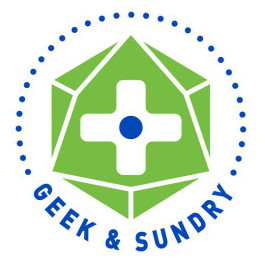 Geek & Sundry is a commercial YouTube and Twitch channel and multimedia production company. It was launched on April 2, 2012 by actress Felicia Day with Kim Evey and Sheri Bryant as part of YouTube's 100 million dollar original channel initiative. In June 2012, Forbes suggested that "if successful, it could help blaze a trail for the future of network television." In 2014, Geek & Sundry was acquired by Legendary Entertainment. The company is primarily known for their launch of the D&D show Critical Role, which aired on their channels from 2015–19.

Nishant Kumar is a British stand-up comedian and television presenter. He became known as the host of satirical comedy The Mash Report, now known as Late Night Mash. He has also presented BBC Radio 4 Extra's topical comedy show Newsjack, the Comedy Central series Joel & Nish vs The World, the BBC Radio 4 programme The News Quiz and Hello America on Quibi.

The following lists notable events that occurred and which took place during 2017 in Sri Lanka.

Amala Ratna Zandile Dlamini, known professionally as Doja Cat, is an American rapper, singer, songwriter, and record producer. Born and raised in Los Angeles, she began making and releasing music on SoundCloud as a teenager. Her song "So High" caught the attention of Kemosabe and RCA Records, with which she signed a joint record deal at the age of 17, subsequently releasing her debut EP Purrr! in 2014. 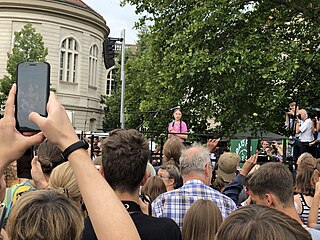 Greta Thunberg is a Swedish climate activist. She has been noted for her skills as an orator, making many effective speeches in excellent English. Her speech at the 2018 United Nations climate summit made her a household name. Prior to her speaking engagements Thunberg demonstrated outside Swedish Riksdag using the signage "skolstrejk för klimatet", school strike for the climate.