Thomas Harry Salme (born 18 February 1969, in Stockholm) [1] was convicted of flying passenger jets without a commercial pilot's license. After working as a First Officer and Captain from 1997 to 2010 for several international airline companies, Salme was arrested at Amsterdam's Schiphol Airport in March 2010.

In 1997, Salme, who worked as a maintenance engineer for SAS airlines, [2] and had never flown a large aircraft, applied to the Italian airline company Air One to be a co-pilot, using false papers and a forged ID number, and was hired. [3] He had learned to fly passenger jets using a flight simulator at Stockholm Arlanda Airport a friend gave him off-hours access to. [4] [2] [5]

In 1999, he was promoted to captain and kept on working for Air One until 2006. He then moved to the Turkish and Dutch airline company Corendon Airlines, where he worked as a Captain for a year, before being offered a contract at the English Jet2. After only ten months he decided to go back to work for Corendon, where he regularly flew passenger jets for another two years.[ citation needed ] Salme accumulated 10,000 hours in the air while flying without a valid commercial pilot's license. [4] [6]

Salme was arrested at Amsterdam's Schiphol Airport in March 2010, while seated in the cockpit of a Corendon Boeing 737 carrying 101 passengers just a few minutes before take-off to Ankara, Turkey. [7] Officers, who were alerted by a tip from Swedish authorities, said the man had once had a private pilot license, but it had expired and it never qualified him for passenger flights. As a result, he was fined 2,000 Euros (£1,700 or $2,700) and was banned from flying for 12 months by a Dutch court, which rejected the prosecutor's request for a three-month suspended jail sentence. [4] [8]

Speaking through his lawyer, Salme said he had no plans to fly again. [8] He wrote a book in Swedish about his experiences, En bluffpilots bekännelse ("Confessions of a Con Pilot"), published in 2012 by Norstedts förlag. [9] [10] [11]

In the analysis of The Times , Salme's employer "bore part of the blame" because of its "laissez-faire approach to background checks". [7] According to The Times and the South China Morning Post , this was one of a series of fake resume scandals as a result of which airlines and other employers tightened their vetting procedures with regard to resume claims made by job applicants. [7] [12] Corendon Airlines tightened its vetting procedures for hiring pilots in the wake of this scandal. [13] Amsterdam Airport Schiphol, known informally as Schiphol Airport, is the main international airport of the Netherlands. It is located 9 kilometres southwest of Amsterdam, in the municipality of Haarlemmermeer in the province of North Holland. With almost 72 million passengers in 2019, it is the third-busiest airport in Europe in terms of passenger volume and the busiest in Europe in terms of aircraft movements. With an annual cargo tonnage of 1.74 million, it is the 4th busiest in Europe. AMS covers a total area of 6,887 acres of land. The airport is built on the single-terminal concept: one large terminal split into three large departure halls. 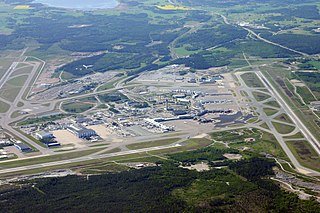 Norwegian Air Shuttle ASA, trading as Norwegian, is a Norwegian low-cost airline and Norway's largest airline. It is the fourth largest low-cost carrier in Europe behind Wizz Air, easyJet and Ryanair, the second-largest airline in Scandinavia, and the ninth-largest airline in Europe in terms of passenger numbers. It offers a high-frequency domestic flight schedule within Scandinavia and Finland, and to business destinations such as London, as well as to holiday destinations in the Mediterranean and the Canary Islands, transporting over 30 million people in 2016. The airline is known for its distinctive livery of white with a red nose, with portraits of high achievers on the tail fins of its aircraft.

Bromma Stockholm Airport is a Swedish domestic and minor international airport in Stockholm. It is located 4 NM west-northwest of downtown Stockholm and is the closest to the city compared to the other commercial passenger airports in the area around Stockholm. Bromma is Sweden's third-busiest airport by passenger traffic and take-offs and landings as of 2015. 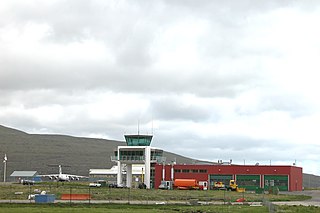 Vágar Airport is the only airport in the Faroe Islands, and is located 1 NM east of the village of Sørvágur, on the island of Vágar. Due to the Faroe Islands' status as a self-governing territory, the airport is not subject to the rules of the European Union. It is the main operating base for Faroese national airline Atlantic Airways and, for a brief period during 2006, was also the base for the low-cost airline FaroeJet.

Burlington International Airport is a joint-use civil-military airport in Chittenden County, Vermont, United States. It is owned by the City of Burlington, Vermont's most populous municipality. The airport is located in South Burlington, three nautical miles (6 km) east of Burlington's central business district. About 15% of the airport's passengers come from Quebec.

Avies AS was an airline and is now a travel company based in Tallinn, Estonia. Its main base was Lennart Meri Tallinn Airport.

Nordic Airways was an airline based in Stockholm, Sweden. It operated extensive charter and wet lease services. The company's low-cost airline subsidiary Nordic Regional also operated a scheduled network of services linking five domestic and one international destination. Its main base was Stockholm-Arlanda Airport. 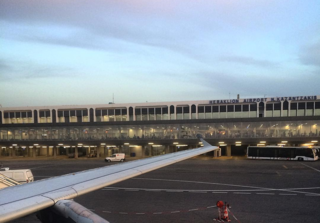 Heraklion International Airport "Nikos Kazantzakis" is the primary airport on the island of Crete, Greece, and the country's second busiest airport after Athens International Airport. It is located about 5 km east of the main city centre of Heraklion, near the municipality of Nea Alikarnassos. It is a shared civil/military facility. The airport is named after Heraklion native Nikos Kazantzakis, a Greek writer and philosopher. Nikos Kazantzakis Airport is Crete's main and busiest airport, serving Heraklion (Ηράκλειο), Aghios Nikolaos, Malia (Mάλλια), Hersonissos (Χερσόνησος), Stalida (Σταλίδα), Elounda (Ελούντα) and other resorts. 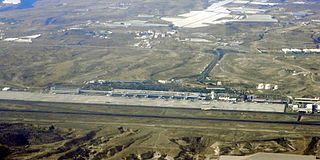 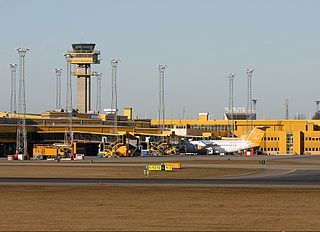 Antalya Airport is an international airport located 13 km (8.1 mi) northeast of the city center of Antalya, Turkey. It is a major destination during the European summer leisure season due to its location at the country's Mediterranean coast. It handled 18,741,659 passengers in 2016, making it the third-busiest airport in Turkey. The airport has two international terminals and one domestic terminal. Antalya is one of the major airports on the Southwest of Turkey, the others being Bodrum and Dalaman.

Corendon Airlines is a Turkish leisure airline headquartered in Antalya and based at Antalya Airport.

SAS Commuter, also branded as Scandinavian Commuter, was a regional airline which operated in Denmark, Norway and Sweden. A sister company of Scandinavian Airlines (SAS), it operated various regional services on behalf of the Scandinavian flag carrier. The airline was headquartered at Copenhagen Airport, which also served as its main base. It later also operated bases at Tromsø Airport; Stockholm Arlanda Airport; Trondheim Airport, Værnes and Bergen Airport, Flesland.

Transwede Airways AB, doing business as Transwede, was a Swedish charter and later also scheduled airline operating between 1985 and 1998. Based at Stockholm Arlanda Airport, Transwede initially flew Sud Aviation Caravelles and from 1987 also McDonnell Douglas MD-80s. Most charter services were inclusive tour flights to the Mediterranean. 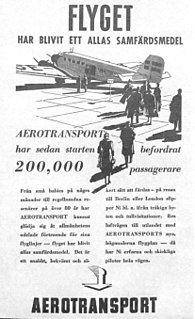 AB Aerotransport (ABA) was a Swedish government-owned airline which operated during the first half of the 20th century and was merged into what would become the SAS Group. ABA was established on 27 March 1924 under the name Aktiebolaget Aerotransport by Carl and Adrian Florman together with Ernst Linder, John Björk och Johan Nilsson. Its first flight was on 2 June 1924 between Stockholm, Sweden and Helsinki, Finland. Needing more funds, it became government-owned in 1935. ABA was merged with Swedish Intercontinental Airlines (SILA) in 1948 and airline operations would ultimately be merged into the international SAS Group in 1950.

Small Planet Airlines was a Lithuanian leisure airline based at Vilnius Airport with further bases throughout Europe. It was the subsidiary of the Small Planet Group which also owned sister companies in Cambodia, Germany, Italy, and Poland, all of which are also now defunct.