Thomas Roger Trautmann is an American historian,cultural anthropologist,and Professor Emeritus of History and Anthropology at the University of Michigan. He is considered a leading expert on the Arthashastra ,the ancient Hindu text on statecraft,economic policy,and military strategy,written in Sanskrit.[ citation needed ] Trautmann has mentored many students during his tenure at the University of Michigan. His studies focus on ancient India,the history of anthropology,and other related subjects.[ citation needed ] Trautmann's work in Indology has been credited with illuminating the underlying economic philosophy that governed ancient Indian kinship.[ citation needed ] He has also written book-length studies on both Dravidian and American Indian kinship. His most recent study concerns the use of the elephant in ancient India.[ citation needed ]

Trautmann began as an assistant professor in 1968,teaching his entire career at Ann Arbor until he was awarded emeritus status.[ citation needed ] He has served as director of the University of Michigan History Department,as well as head of the Center for South Asian Studies. From 1997 to 2006,he served as the editor of Comparative Studies in Society and History . He was honored with a festschrift in 2011. Born and raised in Madison,Wisconsin,he completed his undergraduate work at Beloit College and holds a PhD from the University of London, [1] where he wrote his dissertation on the structure and composition of the Sanskrit text Arthasastra (published in book form in 1971). 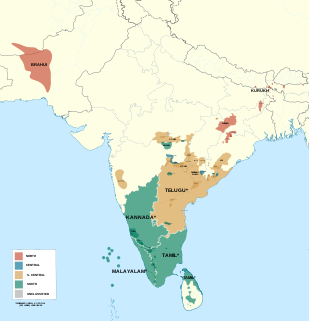 The Dravidian languages are a family of languages spoken by 250 million people, mainly in southern India, north-east Sri Lanka, and south-west Pakistan. Since the colonial era, there have been small but significant immigrant communities in Mauritius, Myanmar, Singapore, Malaysia, Indonesia, Philippines, United Kingdom, Australia, France, Canada, Germany, South Africa, and the United States.

In anthropology, kinship is the web of social relationships that form an important part of the lives of all humans in all societies, although its exact meanings even within this discipline are often debated. Anthropologist Robin Fox says that the study of kinship is the study of what humans do with these basic facts of life – mating, gestation, parenthood, socialization, siblingship etc. Human society is unique, he argues, in that we are "working with the same raw material as exists in the animal world, but [we] can conceptualize and categorize it to serve social ends." These social ends include the socialization of children and the formation of basic economic, political and religious groups.

Dasa is a Sanskrit word found in ancient Indian texts such as the Rigveda and Arthasastra. It usually means "enemy" or "servant" but dasa, or das, also means a "servant of God", "devotee," "votary" or "one who has surrendered to God". Dasa may be a suffix of a given name to indicate a "servant" of a revered person or a particular deity.

Robert Caldwell was a missionary for London Missionary Society. He arrived in India at age 24, studied the local language to spread the word of Bible in a vernacular language, studies that led him to author a text on comparative grammar of the South Indian languages. In his book, Caldwell proposed that there are Dravidian words in the Hebrew of the Old Testament, the archaic Greek language, and the places named by Ptolemy.

Indology, also known as South Asian studies, is the academic study of the history and cultures, languages, and literature of the Indian subcontinent, and as such is a subset of Asian studies.

The Yadava were an ancient Indian people who believed to be descended from Yadu, a legendary king of Chandravamsha lineage. The community was formed of various clans, being the Abhira, Andhaka, Vrishni, and Satvatas, who all worshipped Krishna. They are listed in ancient Indian literature as the segments of the lineage of Yadu (Yaduvamsha). At various times there have been a number of communities and royal dynasties of the Indian subcontinent that have claimed descent from the ancient Yadava clans and legendary Yadava personalities, thus describing themselves as the Yadavas. The sociologist M. S. A. Rao and historians such as P. M. Chandorkar and T. Padmaja say that epigraphical and historical evidence exists for equating the Ahirs with the ancient Yadava clan. The Yadavas of the Mahabharata period were known to be the followers of Vaishnavism, of which Krishna was the leader: they were Gopas (cowherd) by profession, but at the same time they held the status of the Kshatriyas, participating in the battle of Kurukshetra. The present Ahirs are also followers of Vaisnavism.

The Indo-Aryan migrations were the migrations into the Indian subcontinent of Indo-Aryan peoples, an ethnolinguistic group that spoke Indo-Aryan languages, the predominant languages of today's North India, Pakistan, Nepal, Bangladesh, Sri Lanka and the Maldives. Indo-Aryan population movements into the region from Central Asia are considered to have started after 2000 BCE, as a slow diffusion during the Late Harappan period, which led to a language shift in the northern Indian subcontinent. Several hundred years later, the Iranian languages were brought into the Iranian plateau by the Iranians, who were closely related to the Indo-Aryans.

Odd toed ungulate, or hoofed mammals, such as horses, rhinos, and tapirs, may have their evolutionary origins in Indian subcontinent. While horse remains and related artifacts have been found in Late Harappan sites, indicating that horses may have been present at Late Harappan times, horses did not play an essential role in the Harappan civilisation, in contrast to the Vedic period. The importance of the horse for the Indo-Aryans is indicated by the Sanskrit word Ashva, "horse," which is often mentioned in the Vedas and Hindu scriptures.

Sir Herbert Hope Risley was a British ethnographer and colonial administrator, a member of the Indian Civil Service who conducted extensive studies on the tribes and castes of the Bengal Presidency. He is notable for the formal application of the caste system to the entire Hindu population of British India in the 1901 census, of which he was in charge. As an exponent of scientific racism, he used the ratio of the width of a nose to its height to divide Indians into Aryan and Dravidian races, as well as seven castes.

Indigenous Aryanism, also known as the Indigenous Aryans theory (IAT) and the Out of India theory (OIT), is the conviction that the Aryans are indigenous to the Indian subcontinent, and that the Indo-European languages radiated out from a homeland in India into their present locations. It is a "religio-nationalistic" view on Indian history, and propagated as an alternative to the established migration model, which considers the Pontic–Caspian steppe to be the area of origin of the Indo-European languages. 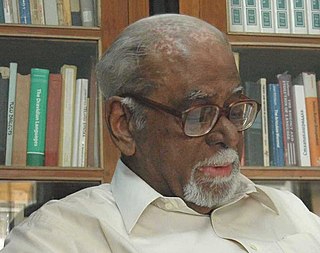 Bhadriraju Krishnamurti was an Indian linguist, specialized in Dravidian languages. He was born in Ongole. He was Vice Chancellor of Hyderabad Central University from 1986 to 1993 and founded the Department of Linguistics at Osmania University where he served as professor from 1962 to 1986. His magnum opus The Dravidian Languages is considered a landmark volume in the study of Dravidian linguistics.

The Dravidian peoples, or Dravidians, are an Ethnolinguistic and cultural group living in South Asia who predominantly speak any of the Dravidian languages. There are around 250 million native speakers of Dravidian languages. Dravidian speakers form the majority of the population of South India and are natively found in India, Pakistan, Afghanistan, Bangladesh, the Maldives, Nepal, Bhutan and Sri Lanka. Dravidian peoples are also present in Singapore, Malaysia, South Africa, Myanmar, East Africa, the Caribbean, and the United Arab Emirates through recent migration.

Various attempts have been made, under the British Raj and since, to classify the population of India according to a racial typology. After independence, in pursuance of the government's policy to discourage distinctions between communities based on race, the 1951 Census of India did away with racial classifications. Today, the national Census of independent India does not recognise any racial groups in India.

Francis Whyte Ellis (1777–1819) was a British civil servant in the Madras Presidency and a scholar of Tamil and Sanskrit.

The early Dravidian religion constituted a non-Vedic form of Hinduism in that they were either historically or are at present Āgamic. The Agamas are non-Vedic in origin, and have been dated either as post-Vedic texts, or as pre-Vedic compositions. The Agamas are a collection of Tamil and Sanskrit scriptures chiefly constituting the methods of temple construction and creation of murti, worship means of deities, philosophical doctrines, meditative practices, attainment of sixfold desires and four kinds of yoga. The worship of tutelary deity, sacred flora and fauna in Hinduism is also recognized as a survival of the pre-Vedic Dravidian religion. Dravidian linguistic influence on early Vedic religion is evident, many of these features are already present in the oldest known Indo-Aryan language, the language of the Rigveda, which also includes over a dozen words borrowed from Dravidian. The linguistic evidence for Dravidian impact grows increasingly strong as one moves from the Samhitas down through the later Vedic works and into the classical post-Vedic literature. This represents an early religious and cultural fusion or synthesis between ancient Dravidians and Indo-Aryans that went on to influence Indian civilisation.

Malaysian Tamil, also known as Malaya Tamil, is a local variant of the Tamil language spoken in Malaysia. It is one of the languages of education in Malaysia, along with English, Malay and Mandarin. There are many differences in vocabulary between Malaysian Tamil and Indian Tamil.

Gloria Goodwin Raheja is American anthropologist who specializes in ethnographic history. She is the author of several historical works where she explores the concepts of caste and gender in India, colonialism, politics of representation, blues music, capitalism in the Appalachia and other diverse topics. Raheja argues that caste stratification in India was influenced by British colonialism. Monographs on ethnographic history and India have been considered "acclaimed" by the Journal of the Royal Anthropological Institute.