Thomas Tull (born June 9, 1970) [1] is an American billionaire [2] businessman, entrepreneur, and film producer. He is the former chairman and chief executive officer (CEO) of Legendary Entertainment. [3] Tull is the founder of Tulco LLC, an investment holding company that uses artificial intelligence and other technologies to guide investing. [4] [5]

Tull grew up in Endwell, New York, the son of a dental hygienist single mother. [6] [7] [8] As a youth, Tull was an athlete, playing baseball and football. [7] Tull graduated from Hamilton College in 1992.

After college, Tull abandoned plans to become a lawyer and instead went into business, starting a chain of laundromats. Among his innovations were different prices according to demand at different times of day. Tull next went into the field of financing, buying and selling several tax and accounting offices. [7] He later became chief of operations of Tax Services of America. [9] His business was buying units from franchisees of Jackson Hewitt Tax Services rolling up and consolidating operations. People who had established franchised locations often preferred being salaried managers. In 2001, Tull left Interactive Technology Funds to join the Convex Group, an Atlanta-based investment group. [10] [11] His firm invested in entertainment, where Tull began to learn the entertainment business. After discussing the potential of private equity with a film executive in 2003, Tull quit Convex, raising $600 million in equity to finance the production of movies under the Legendary Pictures banner. [6]

Tull founded Legendary Entertainment in 2005, becoming the CEO and chairman. [12] The company entered into a partnership in 2005 with Warner Bros. to jointly finance and produce films. [7] In 2009, Tull became the majority shareholder of Legendary, in a buyout of the original investors. [7] The Warner deal was followed by a similar deal with Universal Studios in 2013. He also helped produce the film Blackhat . Legendary was one of the first film production companies to use technology and data analytics to improve the way movies are marketed. Shortly after starting Legendary, Tull built a new analytics division within the company, which uses data to improve marketing decisions, in addition to other key decisions. [13] [14] [15]

Tull describes himself as a "fanboy" of comics, and several of the films produced by Legendary were personal favorites of Tull, including Watchmen, 300 , and Dark Knight. [8] Watchmen had been in "development hell" for years when Tull arranged to pick up the rights. [8] 300 had been turned down by other studios. [7] Tull also describes himself as a "gamer", and co-founded the short-lived Brash Entertainment to work on film-to-video game conversions. [6] [18] Other major films include Inception , The Hangover and its sequels, Man of Steel, and others.

Philanthropy and board membership

Tull has donated US$1 million to Priorities USA Action, a Super PAC supporting Democratic presidential candidate Hillary Clinton. [28] Tull has also supported Republican causes, such as the Senate Leadership Fund, a super PAC for Senate Republicans. [29] He founded the Tull Family Foundation, [30] which has supported a number of causes in the youth, health, and education spaces including the National Little League, [31] a donation of $4.2 million worth of personal protective equipment (PPE) during the COVID-19 pandemic, [32] a donation to the Children's Hospital of Pittsburgh Foundation towards pediatric research and art therapy programs, [33] and a grant to the University of Pittsburgh towards brain cancer research. [34]

He resides in Pittsburgh, Pennsylvania with his wife and their children. [38] They previously lived in Thousand Oaks, California. In January 2018, the 33-plus-acre Thousand Oaks compound was listed for $85 million. [39]

Tull has been a fan of the Pittsburgh Steelers since age four and in 2009 became a part-owner of the team. [40] He is a founder and member of the American rock and southern soul band Ghost Hounds, in which he plays guitar. [41] [42] 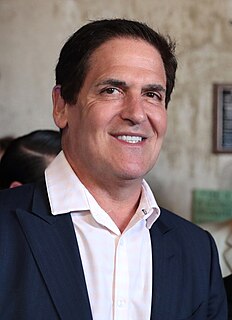 Mark Cuban is an American billionaire entrepreneur, television personality, and media proprietor whose net worth is an estimated $4.8 billion, according to Forbes, and ranked No. 177 on the 2020 Forbes 400 list. He is the owner of the Dallas Mavericks professional basketball team of the National Basketball Association (NBA) and the co-owner of 2929 Entertainment. He is also one of the main "shark" investors on the ABC reality television series Shark Tank.

Philip Frederick Anschutz is an American billionaire businessman who owns or controls companies in a variety of industries, including energy, railroads, real estate, sports, newspapers, movies, theaters, arenas and music. In 2004, he purchased the parent company of the Journal Newspapers, which under Anschutz's direction became the American conservative editorial newspaper Washington Examiner.

Acrisure Stadium is a football stadium located in the North Shore neighborhood of Pittsburgh, Pennsylvania, United States. It primarily serves as the home of the Pittsburgh Steelers of the National Football League (NFL) and the Pittsburgh Panthers of the NCAA Football in the Atlantic Coast Conference (ACC). The stadium opened in 2001, after the controlled implosion of the teams' previous home, Three Rivers Stadium, and was originally named Heinz Field because the once locally based H. J. Heinz Company purchased the naming rights in 2001. Heinz declined to sign a new deal after its naming rights expired in February 2022. 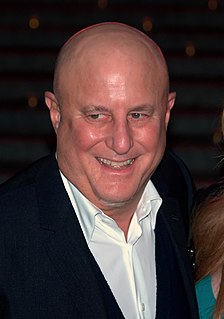 Ronald Owen Perelman is an American banker, businessman and investor. MacAndrews & Forbes Incorporated, his company, has invested in companies with interests in groceries, cigars, licorice, makeup, cars, photography, television, camping supplies, security, gaming, jewelry, banks, and comic book publishing. Perelman holds significant shares in companies such as Deluxe Entertainment, Revlon, SIGA Technologies, RetailMeNot, Merisant, Scantron, Scientific Games Corporation, Valassis, vTv Therapeutics and Harland Clarke. He previously owned a majority of shares in AM General, but in 2020 sold the majority of his shares in AM General along with significant works of art, in light of the impact of the economy on the high debt burdens many of his companies have from leveraged buyouts. In early 2020, Revlon, acquired by Perelman in the 1980s, undertook a debt deal. Previously worth $19.8 billion in 2018, Perelman is, as of September 2020, worth $4.3 billion. 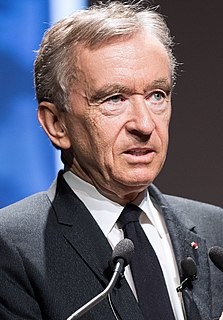 Bernard Jean Étienne Arnault is a French business magnate, investor, and art collector. He is the co-founder, chairman, and chief executive of LVMH Moët Hennessy – Louis Vuitton SE, the world's largest luxury goods company. Arnault and his family had an estimated net worth of US$159 billion in October 2022 according to Forbes, making him the second richest person in the world and the richest in Europe.

Jeffrey Stuart Skoll, OC is a Canadian engineer, billionaire internet entrepreneur and film producer. He was the first president of eBay, eventually using the wealth this gave him to become a philanthropist, particularly through the Skoll Foundation, and his media company Participant Media. He founded an investment firm, Capricorn Investment Group, soon after and currently serves as its chairman. Born in Montreal, Quebec, he graduated from University of Toronto in 1987 and left Canada to attend Stanford University's business school in 1993. 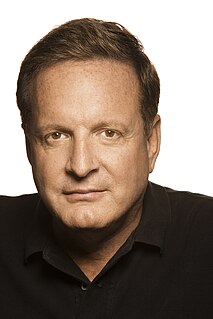 Ronald Wayne Burkle is an American businessman. He is the co-founder and managing partner of The Yucaipa Companies, LLC, a private investment firm that specializes in U.S. companies in the distribution, logistics, food, retail, consumer, hospitality, entertainment, sports, and light industrial sectors.

Legendary Pictures Productions, LLC is an American film production and mass media company based in Burbank, California, founded by Thomas Tull in 2000. The company has collaborated with the likes of Warner Bros., Universal Pictures, Paramount Pictures, Sony Pictures and Netflix. Since 2016, Legendary has been a subsidiary of the multinational Wanda Group and Apollo.

Sir Leonard Valentinovich Blavatnik is a British-American business magnate and philanthropist of Ukrainian Jewish origin. As of March 2022, Forbes listed Blavatnik's wealth as $35.4 billion, making him somewhere between the 20th- and 33rd-richest person in the world. In 2017, Blavatnik received a knighthood for services to philanthropy. 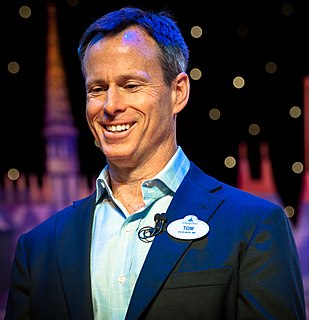 Thomas Owen Staggs is an American business executive and investor. He formerly worked at Disney for nearly 27 years, beginning in 1990, serving as chief operating officer (COO) and chief financial officer (CFO) of The Walt Disney Company and as chairman of Walt Disney Parks and Resorts Worldwide. He holds directorships on various company boards, including Spotify.

Access Industries, Inc. is an American privately held multinational industrial group. It was founded in 1986 by businessman Leonard "Len" Blavatnik, who is also its chairman. Access's industrial focus is in four areas: natural resources and chemicals, media and telecommunications, venture capital and real estate. The group invests in the United States, Europe, Israel, and Latin America. It is headquartered in New York, with additional offices in London and Moscow. 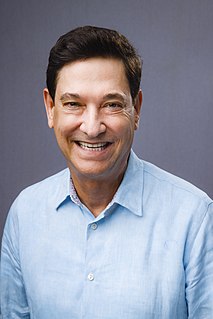 James W. Breyer is an American venture capitalist, founder and chief executive officer of Breyer Capital, an investment and venture philanthropy firm, and a former managing partner at Accel Partners, a venture capital firm. Breyer has invested in over 40 companies that have gone public or completed a merger, with some of these investments, including Facebook, earning over 100 times cost and many others over 25 times cost. On the Forbes 2021 list of the 400 richest Americans, he was ranked #389, with a net worth of US$2.9 billion. 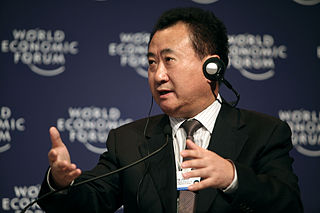 Wang Jianlin is a Chinese business magnate, investor and philanthropist. He is the founder of Dalian Wanda Group, China's largest real estate development company, and the world's largest movie theater operator. He previously owned 17% of the Spanish football club Atlético Madrid. In 2016, Wang reached a deal with FIFA to launch the China Cup, in which national football teams compete in Nanning, Guangxi each year. 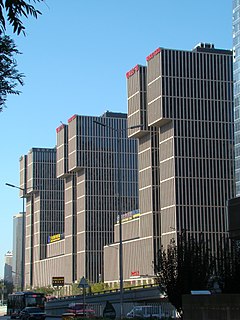 Wanda Group, or the Dalian Wanda Group (大连万达), is a Chinese multinational conglomerate founded in Dalian, Liaoning and headquartered in Beijing. It is a private property developer and owner of Wanda Cinemas and the Hoyts Group.

Nicholas D. Woodman is an American businessman, and the founder and CEO of GoPro. 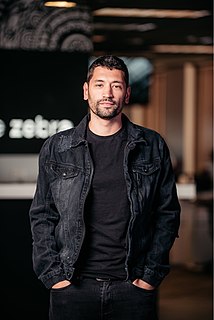 Adam Lyons is an American entrepreneur and businessman. He is the founder of The Zebra, an insurance comparison website.

The MonsterVerse is an American multimedia franchise and shared fictional universe featuring Godzilla, King Kong, and other Toho monster characters. The franchise is produced by Legendary Pictures and co-produced and distributed by Warner Bros. Pictures. The first installment was Godzilla (2014), a reboot of the Godzilla franchise, which was followed by Kong: Skull Island (2017), a reboot of the King Kong franchise, Godzilla: King of the Monsters (2019), and Godzilla vs. Kong (2021). The franchise received a generally positive reception and has been commercially successful with a combined gross of $1.950 billion worldwide.

Fractal Analytics is a multinational artificial intelligence company that provides services in consumer packaged goods, insurance, healthcare, life sciences, retail and technology, and the financial sector. Headquartered in New York, it has a presence in the United States, United Kingdom, and India along with fifteen other locations.

Jon Jashni is an American media investor and advisor.

Acrisure is a financial technology and insurance company headquartered in Grand Rapids, Michigan. The company was initially created to acquire insurance companies in the Midwestern United States and has since expanded nationally. In 2022, Business Insurance recognized Acrisure as the 8th largest insurance broker in the world.

Wikimedia Commons has media related to Thomas Tull .
This page is based on this Wikipedia article
Text is available under the CC BY-SA 4.0 license; additional terms may apply.
Images, videos and audio are available under their respective licenses.