Thomas Winkelmann (born 20 December 1959) is a German businessman and was the Chief Executive Officer (CEO) of the former German airline Air Berlin until it ceased operations in October 2017.

He was born in Hagen in North Rhine-Westphalia (Nordrhein-Westfalen). He studied Linguistics and Classics at the Free University of Berlin (Freie Universität Berlin) and the University of Münster (Westfälische Wilhelms-Universität). In 2004 he completed the AMP at Harvard Business School.

He joined Lufthansa in 1998. He was the head of the company for Latin America and the Caribbean, based in Miami. He became Vice-President of Lufthansa for North and South America, based in New York in September 2000.

He became Chief Executive (Geschäftsführer) of Germanwings in September 2006, when it was owned by Eurowings, which was then headquartered in Dortmund. Germanwings was effectively bought by Lufthansa at the end of 2009.

He is also on the Board of Directors of JetBlue, an American low-cost airline.

On 18 December 2016, it was announced that Winkelmann succeeded Stefan Pichler as CEO of Air Berlin in February 2017. [1]

In October 2017, Air Berlin confirms that it will cease all of its own operations by 27 October 2017. The last flight of Air Berlin was operated by Airbus A320 D-ABNW in the same day. It departed from Munich at 21:36 and landed at Berlin Tegel at 22:45 at night.

He lives in Berlin, with his wife and children. He watches Borussia Dortmund. [2]

Deutsche Lufthansa AG , commonly known as Lufthansa, is the flag carrier and largest German airline which, when combined with its subsidiaries, is the second largest airline in Europe in terms of passengers carried. The name of the company is derived from the German word Luft meaning "air" and Hansa for the Hanseatic League. Lufthansa is one of the five founding members of Star Alliance, the world's largest airline alliance, formed in 1997.

Berlin Schönefeld Airport is the secondary international airport of Berlin, the capital of Germany. It is located 18 km (11 mi) southeast of Berlin near the town of Schönefeld in the state of Brandenburg and borders Berlin's southern boundary. It is the smaller of the two airports in Berlin, after Berlin Tegel Airport, and is a base for easyJet and Ryanair. In 2017 the airport handled 12.9 million passengers by serving mainly European metropolitan and leisure destinations. 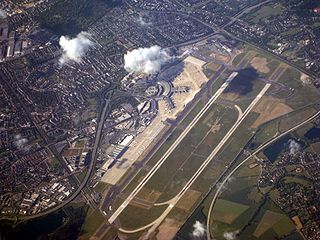 Düsseldorf Airport is the international airport of Düsseldorf, the capital of the German state of North Rhine-Westphalia. It is about 7 kilometres (4 mi) north of downtown Düsseldorf, and some 20 kilometres (12 mi) south-west of Essen in the Rhine-Ruhr area, Germany's largest metropolitan area.

Air Berlin PLC & Co. Luftverkehrs KG, branded as airberlin or airberlin.com was a major German budget airline. At its peak, it was Germany's second-largest airline, as well as Europe's tenth-largest airline in terms of passengers carried. It was headquartered in Berlin and had hubs at Berlin Tegel Airport and Düsseldorf Airport. It was a member of the oneworld airline alliance.

Germanwings GmbH is a German low-cost airline wholly owned by Lufthansa which operates under the Eurowings brand. It is based in Cologne with hubs at Cologne Bonn Airport, Stuttgart Airport, Hamburg Airport, Berlin Tegel Airport, Munich Airport and further bases at Hannover Airport and Dortmund Airport.

Privatair SA was a Swiss airline headquartered in Meyrin, which operated business jets as well as scheduled services on behalf of major airlines. In addition the company operated crew and pilot training facilities. PrivatAir SA was a registered air carrier with two air operator's certificates, in Switzerland and through its subsidiary PrivatAir GmbH in Germany. On 5 December 2018, PrivatAir filed for insolvency and ceased operations.

Niki was an Austrian low-cost airline headquartered in Office Park I at Vienna International Airport in Schwechat. It operated scheduled and charter services to European and North African leisure destinations from Vienna, Salzburg, Graz and Innsbruck and also started services from several German airports in March 2017. Niki had a variety of owners, including two stints of ownership under Niki Lauda. In January 2018, the airline was acquired by Lauda, an airline that also had ties to Niki Lauda.

Germania Fluggesellschaft mbH, trading as Germania, was a privately owned German airline with its headquarters in Berlin. It began by focusing on charter operations, then moved towards becoming a scheduled carrier, although some charter flights were still flown under the brand. The change in strategy led to growth over its last few years, and Germania operated to destinations in Europe, North Africa and the Middle East from several German bases. It carried 2.5 million passengers in 2009 and had around 850 employees as of summer 2014. It declared bankruptcy on 4 February 2019 and ceased operations on 5 February 2019.

Dortmund Airport is a minor international airport located 10 km (6.2 mi) east of Dortmund, North Rhine-Westphalia. It serves the eastern Rhine-Ruhr area, the largest urban agglomeration in Germany, and is mainly used for low-cost and leisure charter flights. In 2019 the airport served 2,719,563 passengers. The nearest major international airport is Düsseldorf Airport approx. 70 km (43 mi) to the southwest.

Lufthansa Regional is an operational entity for regional and feeder flights performed by two regional airlines owned by Lufthansa within its route network. As part of Lufthansa's rebranding, the Lufthansa Regional brand name has gradually been removed from the public eye since early 2018.

Brussels Airlines is the flag carrier and largest airline of Belgium, based and headquartered at Brussels Airport. It operates to over 100 destinations in Europe, North America, Africa and Asia and also offers charter services, maintenance and crew training. It is a member of the Star Alliance as well as the International Air Transport Association. The airline's IATA code SN is inherited from its predecessors, Sabena and SN Brussels Airlines. Brussels Airlines is part of the Lufthansa Group.

Christoph R. Mueller is a German businessman who was the Chief Digital and Innovation Officer of Emirates Group since joined in September 2016. He was the former chief executive officer of Malaysia Airlines. With over 25 years' experience as a turnaround specialist in the aviation, logistic and tourism industry, Mueller has been widely credited with the financial recovery of Irish airline Aer Lingus.

Christoph Franz is a German engineer and manager who served as Chief Executive Officer of Lufthansa from 2011 until 2014.

Lufthansa Italia S.p.A was an Italian airline and a wholly owned subsidiary of the German Lufthansa Group headquartered in Milan and based at Milan–Malpensa Airport. Operations started on 2 February 2009 and ceased on 29 October 2011.

Stefan Pichler is a German airline executive and tourism manager. He is the President and CEO of Royal Jordanian. Previously, Pichler was the Managing Director and CEO of Air Berlin, served as Managing Director and CEO of Fiji Airways, as the CEO of Jazeera Airways, Chairman and CEO of Thomas Cook AG and Chairman of the Bundesverband der Deutschen Tourismuswirtschaft, as well as Chairman of Fiji Tourism. Additionally, he has held Senior and Executive Board roles as a CCO at Virgin Australia and at Lufthansa.

Carsten Spohr is a German airline executive. Since May 2014 he has been the chairman and chief executive officer (CEO) of Lufthansa.

Eurowings Europe is a low-cost airline registered in Austria that is a subsidiary of Lufthansa Group. It began operations in June 2016.