Last updated March 15, 2019
‹ The template Infobox NRHP is being considered for merging. ›

The Thomas and Anna Morrissey House was built as a private house, located at 190 West 9th Street in Holland, Michigan. It was listed on the National Register of Historic Places in 1999. [1] It is one of the few houses in the area still standing that survived the disastrous 1871 forest fire that decimated Holland. [2] The house has been restored to how it would have appeared in 1871, and is operated by the Holland Museum as the Settlers House Museum. [3]

Holland is a city in the western region of the Lower Peninsula of the U.S. state of Michigan. It is situated near the eastern shore of Lake Michigan on Lake Macatawa, which is fed by the Macatawa River.

Holland was first settled by Dutch immigrants who arrived in 1847, led by Rev. Albertus C. Van Raalte. Van Raalte platted the "West Addition," where this house is located, in 1867. Although the construction date of this house is not recorded, beginning in 1867, ship's carpenter Thomas Morrissey and his wife Anna paid taxes on this lot at a rate suggesting that this house existed at the time. However, they did not actually purchase the lot until 1870. [2]

The Morriseys sold the house in 1870 to Hermanus Boone, and moved to Saugatuck, Michigan, where Thomas died the following year. Boone likely did not live in the house, but rather rented it out. In 1873 Boone sold the house to David and Hermina Dangremond Bertsch. Bertsch worked at the tannery owned by his brother John and Isaac Cappon, whose own house is nearby. The Bertsches lived in the house until 1880. The house was sold multiple times over the next ten years; later owners included fire insurance agent Hermanus Dangremond and his wife Emma, bookseller/stationer Leendert Kanters and his wife Minnie, Heinrich and Annie Eigner, and Nancy Charter. The Charter family owned the house from 1890 to 1952, renting it out to various tenants. [2]

Saugatuck is a city in Allegan County in the U.S. state of Michigan. The population was 925 at the 2010 census. The city is within Saugatuck Township, but is administratively autonomous.

The Isaac Cappon House was constructed as a private house, located at 228 West 9th Street in Holland, Michigan. It was listed on the National Register of Historic Places in 1984. It is now operated as the Cappon House Museum.

The Morrissey House is a one-and-one-half-story balloon frame side-gable hall and parlor house with a lean-to addition in the rear. The house has clapboarded walls, plain corner boards, and raking cornices without returns. The front facade has a center entrance flanked by square-head six-over-six windows with board frames. The original portion of the house measures 24 by 15 feet; the addition nearly doubles the house's depth. Most of the house is supported by brick piers, but a small section has a dirt-floored cellar underneath. [2] 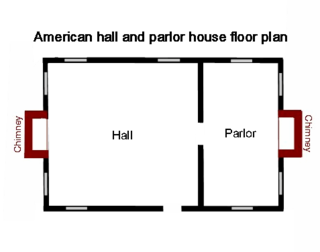 A hall and parlor house is a type of vernacular house found in early modern to 19th century England, as well as in colonial North America. It is presumed to have been the model on which other North American house types have been developed, such as the Cape Cod house, Saltbox, and Central-passage house, and in turn influenced the somewhat later I-house. In England it had been a more modest development from the medieval hall house.

On the interior, the original section contains a main room and bedroom. An enclosed staircase access the upper floor. The addition contains a kitchen and pantry. [2] 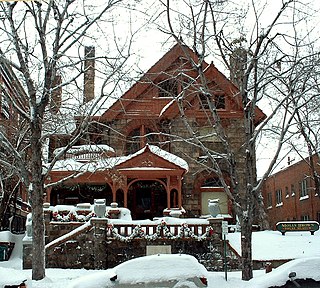 The Molly Brown House Museum is a house located at 1340 Pennsylvania Street in Denver, Colorado, United States that was the home of American philanthropist, activist, and socialite Margaret Brown. Brown was known as "The Unsinkable Molly Brown" because she survived the sinking of the RMS Titanic. The museum, now located in her former home, presents exhibits interpreting her life and that of Victorian Denver as well as historic preservation. The house was listed on the National Register of Historic Places in 1972.

The Stonewall Jackson House, located at 8 East Washington Street in the Historic District of Lexington, Virginia, was the residence of Confederate general Thomas "Stonewall" Jackson from 1858 to 1861. 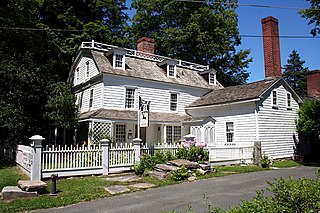 The Keeler Tavern is an 18th-century historical building at 132 Main Street in the center of Ridgefield, Connecticut, United States. The property served as summer home to architect Cass Gilbert, who purchased it in 1907 and designed additions to the building as well as a garden. 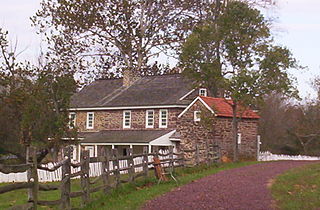 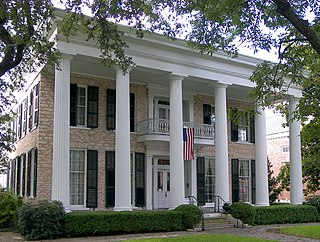 The Neill–Cochran House Museum is a historic home in north-central Austin, Texas. Master builder Abner Cook designed and built the house in 1855 as a suburban estate many years before the surrounding area was settled by other homes and businesses. The two-story Greek Revival home features prominent Doric columns and Mr. Cook's signature "sheaf of wheat" balusters. 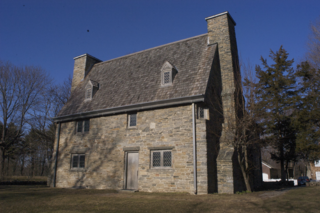 The Henry Whitfield House is a historic house located at 248 Old Whitfield Street in Guilford, Connecticut, down the street from the town green. This house dates from 1639, having been built just before the town of Guilford was settled. It is the oldest house in Connecticut and the oldest stone house in New England. The house, with its massive stone walls, also served as a fort to protect the community. Henry Whitfield, for whom the house was built, was a Puritan minister who had come from England to flee religious persecution. The house was remodeled in 1868 and opened to the public in 1899 as the first museum of the State of Connecticut, the Henry Whitfield State Museum. The house was restored in 1902–04 and in the 1930s and was declared a National Historic Landmark in 1997. It was named a State Archeological Preserve in 2006. 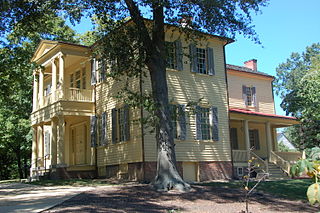 The Mordecai House, built in 1785, is a registered historical landmark and museum in Raleigh, North Carolina that is the centerpiece of Mordecai Historic Park, adjacent to the Historic Oakwood neighborhood. It is the oldest residence in Raleigh on its original foundation. In addition to the house, the Park includes the birthplace of President Andrew Johnson, the Ellen Mordecai Garden, the Badger-Iredell Law Office, Allen Kitchen and St. Mark's Chapel, a popular site for weddings. It is located in the Mordecai Place Historic District. 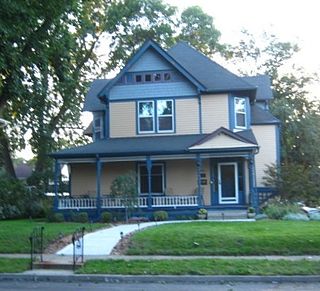 The Dr. Anna E. and Andrew A. Johnstone House is a historic house in Des Moines, Iowa, United States. Built in 1887, the Queen Anne-style house was individually listed on the National Register of Historic Places in 1996. It was included as a contributing property in the Polk County Homestead and Trust Company Addition Historic District in 2016. 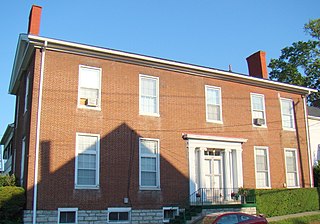 The Johnston–Jacobs House is a Greek Revival style brick house located near downtown Georgetown, Kentucky. The original structure was built in approximately 1795 by Adam Johnston for use as a tavern-inn. The property was added to the U.S. National Register of Historic Places on October 2, 1973. 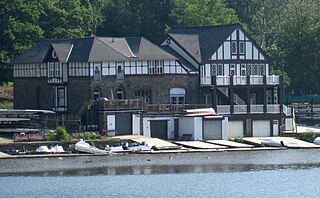 Crescent Boat Club is an American amateur rowing club located at #5 Boathouse Row in the historic Boathouse Row of Philadelphia, Pennsylvania. It was founded in 1867 when Pickwick Barge Club and Iona Barge Club merged. Crescent Boat Club joined the Schuylkill Navy in 1868. In 1871, Crescent competed in and won the doubles event in the first regatta of the National Association of Amateur Oarsmen, an event "which undoubtedly helped the sport greatly."

The Cornelius Van Wyck House is an 18th-century Dutch Colonial home located on the shore of Little Neck Bay in the Douglaston section of Queens in New York City. This house overlooks Little Neck Bay and is well known for both its age and architecture, and especially for its original owners. It was designated as a landmark by the New York City Landmarks Preservation Commission in 1966 and added to the National Register of Historic Places in 1983. The Cornelius Van Wyck House is considered to be the "most impressive architectural remnant of the early Dutch Culture" in New York. 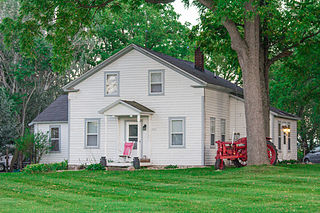 Old Wing Mission is a historic building at 5298 147th Ave. in Holland, Michigan. It is the oldest surviving house in the township.

Third Reformed Church of Holland is a historic church at 111 W. 13th Street in Holland, Michigan. It was built in 1874 and added to the National Register of Historic Places in 1971.

The Jeremiah Platt House in Manhattan, Kansas was built in 1871 and added to the U.S. National Register of Historic Places in 1981.

The Frankfort Land Company House, also known as the John Bockoven House, is a single family house located at 428 Leelanau Street in Frankfort, Michigan, United States. It was listed on the National Register of Historic Places in 1995. It currently operates as the Stonewall Inn B & B.

The Benjamin Van Raalte House, also known as The Maples, is a private house located at 1076 Sixteenth Street in Holland, Michigan. It was listed on the National Register of Historic Places in 1989. It is one of the last remaining structures associated with the family of the Rev. Albertus C. Van Raalte, who founded Holland in 1847. The house and surrounding property now forms the city of Holland's Van Raalte Farm Park.

The Coe House, also known as the Henry and Aurora (Walker) Vinkle House, is a museum and former single family home located at 371 West Michigan Avenue in Grass Lake, Michigan. It was listed on the National Register of Historic Places in 2017.