Thomas of Marlborough (died 1236) (sometimes Thomas de Marleberge) [1] was a medieval English monk and writer. He became abbot of Evesham Abbey in 1230.

Thomas studied civil and canon law at Paris where he studied under Stephen Langton, later Archbishop of Canterbury. He made friends with Richard Poore, later Bishop of Chichester, Salisbury and Durham, while a student. After finishing his studies, Thomas taught at Oxford University before becoming a monk around 1199 at Evesham. [2] While at Oxford, he also studied with John of Tynemouth, a canon lawyer and later Archdeacon of Oxford. [3]

Thomas was the author of a history of the abbots and abbey of Evesham, entitled the Chronicon Abbatiae de Evesham , or Chronicle of the Abbey of Evesham. Thomas' main purpose in writing the Chronicon was to show that Evesham was exempt from the supervision of the Bishops of Worcester. In writing his work, Thomas incorporated an earlier work on the history of the abbey. [4] This earlier work was probably composed by Dominic of Evesham, a monk at Evesham around 1125. [5] Most of the evidence for Thomas' incorporation of an earlier work is stylistic, but it appears likely that Thomas reworked it in order to strengthen his argument. [4]

Thomas needed evidence to help Evesham's legal case due to the conflict between the abbey and Mauger, the Bishop of Worcester, which began when Mauger attempted to visit and inspect the abbey in 1201. [6] Thomas was one of the leading defenders of the rights of the abbey, [2] in what was to turn into a long drawn out legal case before the king and then the papacy. Although it was suspended with the exile of Mauger during the Interdict on England in King John's reign, it was later revived, and finally decided in 1248. However, the case against the bishop became entangled with a dispute within the abbey between the monks and the abbot Roger Norreis over the payment of the costs of the legal fight with Mauger, which eventually resulted in the expulsion of Norreis in 1213. [7]

Thomas was previously the prior of Evesham before being elected by the monks in 1229. However, his election was not considered valid until he was admitted to the office by the pope, which occurred before he was blessed in the office around 11 July 1230. He was enthroned as abbot on 29 September 1230. [8]

After Thomas had petitioned the papacy for permission to resign the abbacy on the grounds of old age and physical disability, the pope gave permission to the Bishop of Coventry to allow his resignation on 13 July 1236. Thomas died on 12 September 1236. [8] 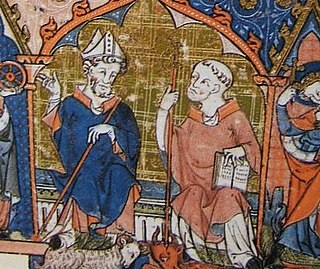 Cyneweard was an Anglo-Saxon Bishop of Wells. He was a monk of Glastonbury Abbey before becoming abbot of Milton Abbey in 964. He was consecrated bishop of the Diocese of Wells in about 973 or 974, and died in office on 28 June 975. His death is mentioned in the short Old English poem "The Death of King Edgar", which occurs in the entry for 975 of two of the manuscripts of the Anglo-Saxon Chronicle.

Sigar was an Anglo-Saxon Bishop of Wells.

Hugh of Beaulieu was a medieval English Bishop of Carlisle.

Randulf of Evesham was a medieval Bishop of Worcester-elect and Abbot of Evesham.

The Chronicon Abbatiae de Evesham or Chronicle of the Abbey of Evesham, sometimes the Evesham Chronicle, is a medieval chronicle written at and about Evesham Abbey in England.

Æthelwig was an Abbot of Evesham before and during the Norman Conquest of England. Born sometime around 1010 or 1015, he was elected abbot in 1058. Known for his legal expertise, he administered estates for Ealdred, the Bishop of Worcester prior to his election as abbot. After his election, he appears to have acted as Ealdred's deputy, and was considered as a possible successor when Ealdred was elected Archbishop of York. Æthelwig worked during his abbacy to recover estates that had been lost to Evesham, as well as acquiring more estates. 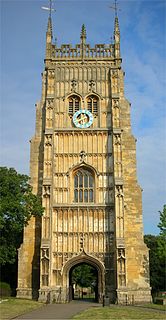 Dominic of Evesham was a medieval prior of Evesham Abbey in England and writer of religious texts. Probably a native Englishman, there is some confusion about when he became a monk, but by 1104 he was at Evesham and by 1125 he held the office of prior. He is chiefly known for his religious works, including one on the miracles of the Virgin Mary that was an important source for later writings on the subject. Four of his works are still extant.

The Abbot of Evesham was the head of Evesham Abbey, a Benedictine monastery in Worcestershire founded in the Anglo-Saxon era of English history. The succession continued until dissolution of the monastery in 1540:

Adam of Eynsham was a medieval English chronicler and writer. He was a monk and Abbot of Eynsham Abbey.

Roger Norreis was Abbot of Evesham in England. He was a controversial figure, installed in several offices against opposition. In his appointment to Evesham, he was accused of immoral behaviour and failing to follow monastic rules. In 1202, Norreis became embroiled in a dispute with his monks and his episcopal superior the Bishop of Worcester; litigation and argumentation lasted until his deposition in 1213. He was then appointed prior of a subsidiary monastic house of Evesham, but was deposed within months, then re-appointed to the office five years later.

Clarembald was a medieval Benedictine monk and abbot-elect of St Augustine's Abbey in Canterbury, Kent.

Walter, Abbot of Evesham or Walter de Cerisy was an 11th-century abbot and church leader of England under the Norman conquest. He is known from the Domesday Book and several legal documents.

England
13th-century English abbot and writer
This page is based on this Wikipedia article
Text is available under the CC BY-SA 4.0 license; additional terms may apply.
Images, videos and audio are available under their respective licenses.