Thompson Berwick and Pratt and Partners

Thompson Berwick and Pratt and Partners is an architectural firm that was founded in 1908 [1] as Sharp and Thompson. The firm played a substantial role in Vancouver and Canadian Architecture and began as a birthplace for several famous Canadian architects such as Barry Downs, Paul Merrick, [2] Arthur Erickson, and Ron Thom.

Early work was inspired by medieval and classical architecture which included residential, commercial, and institutional, especially several buildings on the University of British Columbia Campus. [3]

The firm became known for winning the 1913 international competition for the UBC Point Grey Campus master plan as well as becoming the university's official architecture firm. [4]

Robert A.D. Berwick and Charles Edward Pratt later joined the firm in 1937, which switched the firm's style to European modernism.

Arthur Charles Erickson was a Canadian architect and urban planner. He studied Asian languages at the University of British Columbia, and later earned a degree from McGill University's School of Architecture. He is renowned for designing some of the most recognizable buildings and sites in Canada, including Roy Thomson Hall, Robson Square, the Museum of Glass and the Simon Fraser University campus. 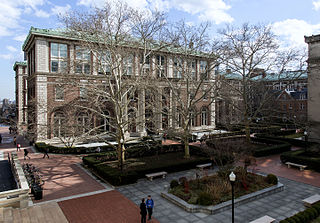 The Graduate School of Architecture, Planning and Preservation at Columbia University in New York City, also known simply as GSAPP, is regarded as one of the most important and prestigious architecture schools in the world. It is also home to the well-regarded Masters of Science program in Advanced Architectural Design, Historic Preservation, Real Estate Development, Urban Design, and Urban Planning.

Ronald James Thom, was a Canadian architect. He is well-known for two works: Massey College and Trent University's riverside campus.

Cornelia Hahn Oberlander is a Canadian landscape architect based in Vancouver, British Columbia. During her career she has contributed to the designs of many high-profile buildings in both Canada and the United States, including the Robson Square and Law Courts Complex in Vancouver, the National Gallery of Canada, the Canadian Chancery in Washington D.C., the Library Square at the Vancouver Public Library, the Museum of Anthropology at the University of British Columbia, and Northwest Territories Legislative Assembly Building in Yellowknife. Her firm, Cornelia Hahn Oberlander Landscape Architects, was founded in 1953, when she moved to Vancouver.

York and Sawyer was an American architectural firm active between 1898 and 1949. The firms' work is exemplary of Beaux-Arts architecture as it was practiced in the United States. The partners Edward York and Philip Sawyer (1868–1949) both trained in the office of McKim, Mead & White in the 1890s. In 1898, they established their independent firm, based in New York City.

H. Peter Oberlander, was a Canadian architect and Canada's first professor of Urban and Regional Planning.

Bing Wing Thom, was a Canadian architect and urban designer. Born in Hong Kong, he immigrated to Vancouver, British Columbia, Canada with his family in 1950. His paternal grandfather originally immigrated to Vancouver in the 1890s and his father was born in New Westminster before moving to Hong Kong after being unable to practice as a pharmacist in Canada.

Arcop was an architectural firm based in Montreal, renowned for designing many major projects in Canada including Place Bonaventure, Place Ville-Marie and Maison Alcan. The firm was originally formed as a partnership under the name Affleck, Desbarats, Lebensold, Michaud & Sise between Ray Affleck, Guy Desbarats, Jean Michaud, Fred Lebensold and Hazen Sise, all graduates and/or professors at the McGill School of Architecture. In 1959, after the departure of Michaud and the addition of Dimitri Dimakopoulos, another McGill Architecture graduate, the firm was renamed Affleck, Desbarats, Dimakopoulos, Lebensold, Sise which it maintained for a decade afterward. The company did not adopt the name Arcop, which stands for "Architects in Co-Partnership", until 1970.

The architecture of Vancouver and the Metro Vancouver area holds a combination of modern architectural styles, ranging from the 20th century Edwardian style, to the 21st century modernist style and beyond. Initially, the city's architects embraced styles and ideas developed in Europe and the United States with only limited local variation.

Abraham Jedidiah Rogatnick was a American-born Canadian architect and professor.

DA Architects + Planners is an architectural firm founded in 1969 and located in Vancouver, British Columbia, Canada. The company is notable for its involvement in many of the major buildings in Vancouver, including Canada Place with Zeidler Roberts Partnership and MCMP, Vancouver Convention Centre West with LMN and MCMP and Vancouver's Library Square with Moshe Safdie.

Catherine Mary Wisnicki was a Canadian architect, planner and educator. She was the first woman to graduate from the McGill University School of Architecture. Her professional career was spent largely in Vancouver, where she was a senior designer with the firm Sharp, Thompson, Berwick, Pratt. She taught at the University of British Columbia school of architecture.

African-American architects are those in the architectural profession who are members of the African diaspora in the United States.

Charles Edward "Ned" Pratt was an American-Canadian oarsman and architect. Pratt competed in the 1932 Summer Olympics in Los Angeles where he won a bronze medal in double sculls. In 1939 he joined the Vancouver architectural firm Sharp and Thompson, where he remained for the duration of his career. During his career he played an important role in bringing modern architecture to the Canadian west coast.

The McGill School of Architecture is one of eight academic units constituting the Faculty of Engineering at McGill University in Montreal, Quebec, Canada. Founded in 1896 by Sir William Macdonald, it is among the oldest architecture schools in North America, offering accredited professional and post-professional programs ranging from undergraduate to PhD levels. Since its founding, the School has established an international reputation and a record of producing leading professionals and researchers who have helped shape the field of architecture, including Moshe Safdie, Arthur Erickson, Raymond Moriyama and the founders of Arcop.

Eva Matsuzaki is a retired architect and first former female president of the Royal Architectural Institute of Canada (RAIC). Eva immigrated from Latvia to the United States and later developed her career living in Vancouver, Canada. In 1998, she established her own firm known as Matsuzaki Architects Incorporated along with her husband, Kiyoshi Matsuzaki. Matsuzaki is a founding member of Vancouver's women in architecture support network and is involved in environmentally sensitive and sustainable building design.

BattersbyHowat Architects is an architecture, landscape architecture, and interior design firm based in Vancouver, Canada, with a second office in Edmonton. The practice was founded in 1996 by partners David Battersby and Heather Howat.

D’Arcy Jones is a Canadian architect and the founding principle of D’Arcy Jones Architects (DJA), a studio practice based out of Vancouver British Columbia, Canada. DJA's portfolio consists of completed and ongoing projects focusing greatly within their local area of British Columbia while some reside as far as Ontario, Washington, California, and Switzerland. D’Arcy Jones Architects focuses mainly on small scale boutique residential homes, many of which have brought national and international recognition for the practice.

Geoffrey Massey was a Canadian architect and urban planner noted for his modernism-inspired architectural works. He was known for his partnership with architect Arthur Erickson that produced notable designs including the Simon Fraser University, and MacMillan Bloedel Building. As an urban planner Massey was known for his contributions toward pedestrian-friendly densification of Vancouver and development of Granville Island in the city.