Thompson Sound is an unincorporated locality on the east side of the sound of the same name, which is in the area of Tribune Channel and the Broughton Archipelago in the Central Coast region of British Columbia, Canada.

Thompson Sound is a sound on the Central Coast of British Columbia, Canada, located on the east side of Tribune Channel and to the east of Gilford Island, part of the Broughton Archipelago. The headland on the north side of the sound's entrance is London Point at 50°46′09″N126°07′07″W. The south side of the entrance is demarcated by Cleave Point at 50°44′35″N126°07′28″W.

Tribune Channel is a channel or strait on the Central Coast of British Columbia, Canada, separating Gilford Island on the west and north from the mainland. The channel bends around Gilford Island, with the mouth of Thompson Sound at the elbow of the bend, opening eastwards to the mouth of the Kakweiken River.

The Broughton Archipelago is a group of islands on the northeastern flank of the Queen Charlotte Strait on the coast of British Columbia, Canada. The largest islands in the group, which includes numerous smaller islets, are Broughton Island, North Broughton Island, Eden Island, Bonwick Island and Baker Island. The islands are all located within the Regional District of Mount Waddington; however, nearly all lands in the area are owned by the Provincial Crown and most settlements in the area, with the exclusion of floating settlements, are either Indian Reserves of bands of the Musgamagw Tsawataineuk Tribal Council or fish farms under the jurisdiction of the federal Department of Fisheries and Oceans.

The Entrada Sandstone is a formation in the San Rafael Group that is found in the U.S. states of Wyoming, Colorado, northwest New Mexico, northeast Arizona and southeast Utah. Part of the Colorado Plateau, this formation was deposited during the Jurassic period sometime between 180 and 140 million years ago in various environments, including tidal mudflats, beaches and sand dunes. The Middle Jurassic San Rafael Group was dominantly deposited as ergs in a desert environment around the shallow Sundance Sea.

The Bridgeport Sound Tigers are a professional ice hockey team playing in the American Hockey League (AHL). They are the AHL affiliate of the National Hockey League's New York Islanders, who also own the franchise, since its inception. The team is based in Bridgeport, Connecticut and play their home games at the Webster Bank Arena.

Camchin, also spelled Kumsheen, is an anglicization of the ancient name for the locality and aboriginal village once located on the site of today's Village of Lytton, British Columbia, Canada, whose name in the Nlaka'pamux language is ƛ'q'əmcín It also refers to the main Indian Reserve community of the Lytton First Nation adjacent to the Village of Lytton and is found in the form Kumsheen in local business and school names.

Chu Chua Cottonwood Provincial Park is a provincial park in British Columbia, Canada, located 80km north of Kamloops and incorporating a group of forested islands in the floodplain of the North Thompson River. 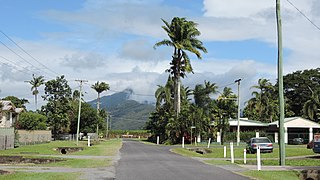 Aloomba is a town and a locality in the Cairns Region, Queensland, Australia. In the 2016 census, Aloomba had a population of 529 people.

Gilford Island is an island in British Columbia, Canada, located between Tribune Channel and Knight Inlet. The island has an area of 382 square kilometres (147 sq mi). Turnour Island is to the south across Tribune Channel, the entrance to Thompson Sound to the east.

The Dungeons & Dragons Computer Labyrinth Game was an electronic board game released by Mattel in 1980.

Alice Gertrude was a wooden steamship which operated on the Strait of Juan de Fuca and Puget Sound from 1898 to January 1907, when she was wrecked at Clallam Bay in Washington.

Kildonan is a locality and former steamer landing in the Alberni Inlet-Barkley Sound region of the west coast of Vancouver Island, British Columbia, Canada. It is located on the east side of Uchuchklesit Inlet, which is on the north side of the lower reaches of Alberni Inlet. In the early 20th century, there were canneries here and at Uchucklesit, which is another locality on the same inlet.

Swanport, also formerly known as Thompson's Crossing and Thomson's Landing, is a suburban satellite locality of Murray Bridge in South Australia on the west (right) bank of the Murray River adjacent to Swanport Bridge. Its boundaries were formalised in March 2000 to cover a portion of semi-urban land immediately south of the South Eastern Freeway adjacent to the Swanport Bridge, which is the main road freight route over the Murray. It is named for the docking place on the west bank of the Murray which was home to "numerous swans" and also known as Thomson's Landing.

Thompson Beach is a locality in the Australian state of South Australia located on the eastern coastline of Gulf St Vincent about 56 kilometres north of the Adelaide city centre. Thompson Beach started as a sub-division in 1980 with boundaries being created in June 1997. Land use with the locality is principally residential with built development being of a ‘low density’. Thompson Beach is located within the federal Division of Wakefield, the state electoral district of Narungga, and the local government area of the Adelaide Plains Council.

Dulong is a locality in the Sunshine Coast Region, Queensland, Australia.

Tilley Swamp is a locality in the Australian state of South Australia located in the state's south-east about 199 kilometres (124 mi) south-east of the state capital of Adelaide and about 55 kilometres (34 mi) north of the municipal seat of Kingston SE. The 2016 Australian census, which was conducted in August 2016, reports that the area had a population of 27 people.

Rubyanna is a locality in the Bundaberg Region, Queensland, Australia.

The BC Geographical Names is a geographic name web service and database for British Columbia, Canada, which is run and maintained by the Base Mapping and Geomatic Services Branch of the Integrated Land Management Bureau. The database contains official names and spellings of towns, mountains, rivers, lakes, and other geographic places. The database often has other useful information, such as the history of geographic names, and their use in history.