A thoroughfare is a road or way for travel between places

Thoroughfare may also refer to:

Thoroughfare is a locality or small settlement located east of Clarenville, Newfoundland and Labrador. The post office closed in 1966 and mail was collected at British Harbour. The population was 62 in 1940.

Thoroughfare is an unincorporated community in western Prince William County, Virginia. Roughly located on Virginia State Route 55 about 1.5 miles West of Haymarket where the Norfolk Southern Railway tracks cross the road. The community thrived through the 1940s as a community founded by former slaves. As a place name, Thoroughfare is no longer in common use.

The Second Battle of Bull Run or Battle of Second Manassas was fought August 28–30, 1862 in Prince William County, Virginia, as part of the American Civil War. It was the culmination of the Northern Virginia Campaign waged by Confederate Gen. Robert E. Lee's Army of Northern Virginia against Union Maj. Gen. John Pope's Army of Virginia, and a battle of much larger scale and numbers than the First Battle of Bull Run fought on July 21, 1861 on the same ground. 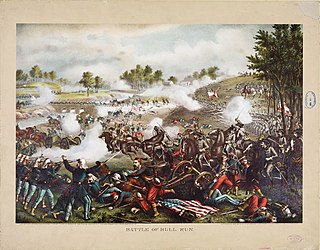 The First Battle of Bull Run, also known as the First Battle of Manassas, was fought on July 21, 1861 in Prince William County, Virginia, just north of the city of Manassas and about 25 miles west-southwest of Washington, D.C. It was the first major battle of the American Civil War. The Union's forces were slow in positioning themselves, allowing Confederate reinforcements time to arrive by rail. Each side had about 18,000 poorly trained and poorly led troops in their first battle. It was a Confederate victory, followed by a disorganized retreat of the Union forces.

The Battle of South Mountain—known in several early Southern accounts as the Battle of Boonsboro Gap—was fought September 14, 1862, as part of the Maryland Campaign of the American Civil War. Three pitched battles were fought for possession of three South Mountain passes: Crampton's, Turner's, and Fox's Gaps. Maj. Gen. George B. McClellan, commanding the Union Army of the Potomac, needed to pass through these gaps in his pursuit of Confederate General Robert E. Lee's precariously divided Army of Northern Virginia. Although the delay bought at South Mountain would allow him to reunite his army and forestall defeat in detail, Lee considered termination of the Maryland Campaign at nightfall. 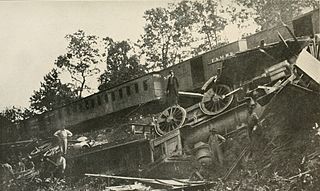 The Battle of Aldie took place on June 17, 1863, in Loudoun County, Virginia, as part of the Gettysburg Campaign of the American Civil War. 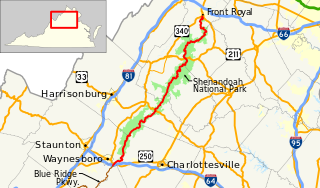 Skyline Drive is a 105-mile (169 km) road that runs the entire length of the National Park Service's Shenandoah National Park in the Blue Ridge Mountains of Virginia, generally along the ridge of the mountains. The drive's northern terminus is at an intersection with U.S. Route 340 near Front Royal, and the southern terminus is at an interchange with US 250 near Interstate 64 (I-64) in Rockfish Gap, where the road continues south as the Blue Ridge Parkway. The road has intermediate interchanges with US 211 in Thornton Gap and US 33 in Swift Run Gap. Skyline Drive is part of Virginia State Route 48, which also includes the Virginia portion of the Blue Ridge Parkway, but this designation is not signed. 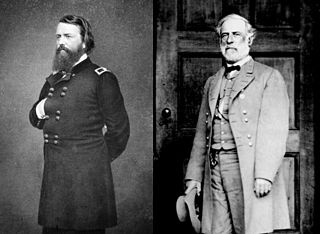 The Northern Virginia Campaign, also known as the Second Bull Run Campaign or Second Manassas Campaign, was a series of battles fought in Virginia during August and September 1862 in the Eastern Theater of the American Civil War. Confederate General Robert E. Lee followed up his successes of the Seven Days Battles in the Peninsula Campaign by moving north toward Washington, D.C., and defeating Maj. Gen. John Pope and his Army of Virginia.

Manassas National Battlefield Park, located north of Manassas, in Prince William County, Virginia, preserves the site of two major American Civil War battles: the First Battle of Bull Run on July 21, 1861, and the Second Battle of Bull Run which was fought between August 28 and August 30, 1862. The peaceful Virginia countryside bore witness to clashes between the armies of the North (Union) and the South (Confederacy), and it was there that Confederate General Thomas J. Jackson acquired his nickname "Stonewall."

Valley Pike or Valley Turnpike is the traditional name given for the Indian trail and roadway which now approximates as U.S. Route 11 in the Shenandoah Valley of Virginia. 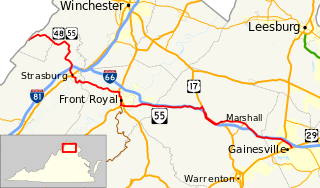 State Route 55 is a primary state highway in the U.S. state of Virginia. Known for most of its length as John Marshall Highway, the state highway runs 64.71 miles (104.14 km) from the West Virginia state line, where the highway continues as West Virginia Route 55, east to U.S. Route 29 in Gainesville. West of its interchange with Interstate 81 (I-81) in Strasburg, SR 55 runs concurrently with the easternmost portion of US 48 as part of Corridor H. East of Front Royal, the state highway serves as the local complement of I-66 as it passes through the towns of Marshall, The Plains, and Haymarket.

Little River is a 23.4-mile-long (37.7 km) tributary stream of Goose Creek in Fauquier and Loudoun counties in northern Virginia. Via Goose Creek, it is a tributary of the Potomac River.

Manassas may refer to: 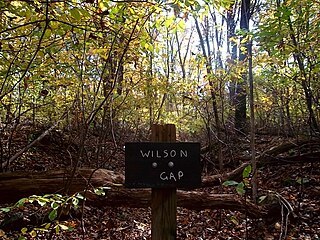 Wilson Gap, originally known as Gregory's Gap, is a wind gap in the Blue Ridge Mountain, located on the border of Loudoun County, Virginia and Jefferson County, West Virginia. The Appalachian Trail crosses the gap.