Thoroughly Modern Bing is a long-playing vinyl album recorded by Bing Crosby for Pickwick Records at Mastertone Recording Studio in Long Island City, New York. The orchestral tracks were conducted by "Bugs" Bower with a vocal group under the direction of Don Marshall. Crosby subsequently over-dubbed his vocals at two separate sessions in February 1968. [1]

Harry Lillis "Bing" Crosby was an American singer and actor. The first multimedia star, Crosby was a leader in record sales, radio ratings, and motion picture grosses from 1931 to 1954. His early career coincided with recording innovations that allowed him to develop an intimate singing style that influenced many male singers who followed him, including Perry Como, Frank Sinatra, Dick Haymes, and Dean Martin. Yank magazine said that he was "the person who had done the most for the morale of overseas servicemen" during World War II. In 1948, American polls declared him the "most admired man alive", ahead of Jackie Robinson and Pope Pius XII. Also in 1948, Music Digest estimated that his recordings filled more than half of the 80,000 weekly hours allocated to recorded radio music.

Another song, "Where the Rainbow Ends" was also recorded on February 12, 1968 but did not appear on the original vinyl album. It was included on a LaserLight CD in 1991. A song called "That's All I Want from You" (written by M. Rotha) was also recorded on the same day but has never surfaced.

"That's All I Want from You" is a popular song by Fritz Rotter, published in 1955.

Billboard said: "In this uptempo album, the old crooner shows that he still has much of the fire that ranked him among yesterday's superstars. Here he is applying his unique style to some recent top chart riders with interesting results." [2]

The British publication "The Gramophone" commented: "Meanwhile there is overwhelming evidence that Mr. Crosby has lost none of his charm or skill in Thoroughly Modern Bing (Stateside SL10257). He works his lasting magic on “Talk to the Animals,” “Love Is Blue,” “Chim Chim Cheree,” and other modern songs of quality plus the oldie “Ding Dong the Witch Is Dead” with the same ease and warmth that was discernible in 1928. He even transforms a blatant flag-waver like “What’s More American” into something tolerable, and is the first singer to hold my attention throughout “Puff (The Magic Dragon)” without causing a single wince." [3]

Gramophone is a magazine published monthly in London devoted to classical music, particularly to reviews of recordings. It was founded in 1923 by the Scottish author Compton Mackenzie. It was acquired by Haymarket in 1999. In 2013 the Mark Allen Group became the publisher.

Some Fine Old Chestnuts was Bing Crosby's second studio album for Decca Records, recorded and released as a 10" LP in 1954.

High Society is a 1956 soundtrack album, featuring Bing Crosby, Frank Sinatra, Louis Armstrong and Grace Kelly. This was Crosby's fifth LP album, and his first recorded for Capitol Records. It was the soundtrack for the MGM feature film High Society, also released in 1956. Initially issued on vinyl either in mono or stereo format, the album has been issued on CD by Capitol in Japan in 1991 and by Capitol in the UK in 1995. The album was also included in a 3-CD box set called "Original Soundtrack Recordings" issued by the EMI Music Group Australasia 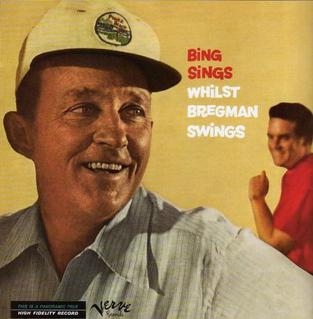 Bing Sings Whilst Bregman Swings was Bing Crosby's sixth LP, his first album for Verve, recorded and released in a mono format in 1956.

"Witchcraft" is a popular song from 1957 composed by Cy Coleman with lyrics by Carolyn Leigh. It was released as a single by Frank Sinatra, and reached number six in the U.S., spending sixteen weeks on the charts.

A Couple of Song and Dance Men is a 1975 vinyl album made by Fred Astaire and Bing Crosby for United Artists. It was recorded with Pete Moore and his Orchestra, and the Johnny Evans Singers in July 1975 at the Music Centre, Wembley.

Go West Young Man is a compilation album of songs on one 10" vinyl record by Bing Crosby and The Andrews Sisters released in 1950 featuring songs that were sung by Crosby and the Sisters with a Western-type genre. This album is one of the first by Crosby to not be released on 78 rpm records before going straight to an LP or set of 45s. The album includes several songs which had already enjoyed Billboard chart success. “Along the Navajo Trail” reached the No. 2 position in 1945 and "One Hundred and Sixty Acres", "Have I Told You Lately That I Love You?" and "Quicksilver" also charted.

Song Hits from Holiday Inn is a studio album of phonograph records by Bing Crosby and Fred Astaire released in July 1942 featuring songs presented in the American musical film Holiday Inn. These are the longer studio recorded versions of the songs presented in the film. For the songs that were actually in the film, see Holiday Inn (soundtrack). This album is not only notable because it is one of the greatest works of the highly regarded songwriter Irving Berlin, but it is only Crosby's third studio album. This was also the first release of Crosby's signature song "White Christmas" on shellac disc record. The 1942 version would only be released only one more time, in Merry Christmas in 1945 before the song was re-recorded and the later version became the standard. 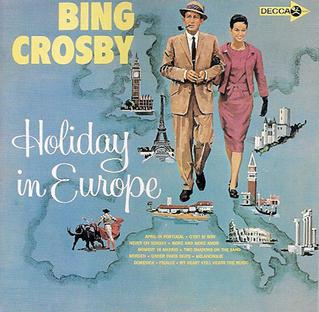 Holiday in Europe was a long-playing vinyl album recorded for Bing Crosby's own company, Project Records at Radio Recorders, Hollywood and issued by Decca Records (DL-4281) in 1962. The album consists of twelve European songs. The orchestral arrangements were by Bob Thompson and the orchestra was conducted by Malcolm Lockyer at Decca’s West Hampstead, London studios in October 1960. Crosby had recorded four of the songs with Lockyer on October 15, 1960 in London but a decision was taken not to use these vocal tracks. Crosby subsequently over-dubbed his vocals on all of the orchestral tracks in May 1961. Malcolm Lockyer does not receive a credit on the album cover.

On the Happy Side was a long-playing vinyl album recorded by Bing Crosby for his own company, Project Records and issued by Warner Bros. Records (W1482) in 1962. The album is in a “sing along” style and Crosby over-dubbed his vocals on accompaniment recorded in London earlier in April 1962. The musical arrangements were by Bob Thompson, Jack Halloran and Peter Matz. The album was issued on CD for the first time in 2017 by Sepia Records.

I Wish You a Merry Christmas was a long-playing vinyl album of Christmas themed songs recorded by Bing Crosby for his own company, Project Records, and issued by Warner Bros. (W-1484) in 1962.

Return to Paradise Islands is a long-playing vinyl album of Hawaiian themed songs recorded by Bing Crosby for Reprise Records (R-6106) at three separate sessions in 1963. The tracks were arranged by Nelson Riddle who also conducted the orchestra. 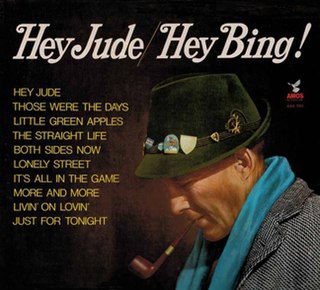 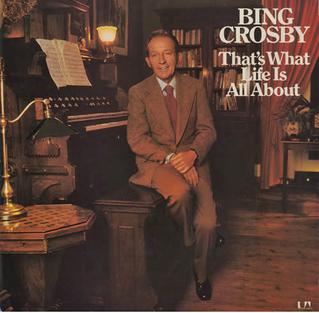 That’s What Life Is All About is a 1975 vinyl album recorded by Bing Crosby for United Artists at Chappells in London in February 1975. He was accompanied by Pete Moore and his Orchestra.

At My Time of Life is a 1976 vinyl album recorded by Bing Crosby for United Artists, mostly at Chappells Studios in London in February 1975. He was accompanied by Pete Moore and his Orchestra.

Bingo Viejo is a 1975 vinyl album recorded by Bing Crosby at his own expense during two sessions in 1975 at United Recorders, Hollywood. "Viejo" means "old" in Spanish. He was accompanied by Paul Smith and his Orchestra. Crosby, who called the LP his "Mexican album", leased the tracks to the English branch of Decca following negotiations with producer Geoff Milne and the album was issued on Decca's London label.

Beautiful Memories is a 1976 vinyl album recorded by Bing Crosby for United Artists Records, Eight of the songs were recorded at Devonshire Sound Studios, Magnolia Boulevard, North Hollywood on October 19 and 29, 1976. The orchestral accompaniment was recorded in London on September 10 and 11, 1976 and Crosby dubbed his voice in Los Angeles. Of the other four songs on the LP, one had been recorded on February 26, 1975 and two were recorded on January 19, 1976 at United Western Studios, Los Angeles. The title song was dubbed by Crosby on November 5, 1976, also at United Western Studios, using the track recorded in London. Crosby was accompanied by Pete Moore and his Orchestra throughout the album and by The Johnny Evans Singers on certain tracks. 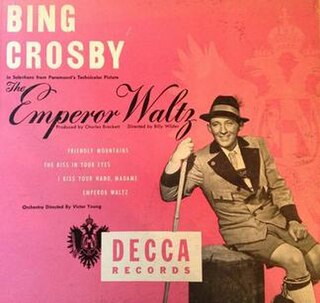 Songs from Mr. Music is a Decca Records studio 78rpm album of phonograph records by Bing Crosby, The Andrews Sisters and Dorothy Kirsten of songs from the film Mr. Music, catalog number A-790.