Thorvaldson Lake is a fresh water lake in Northern Saskatchewan, named after Thorbergur Thorvaldson in 1966. [1] 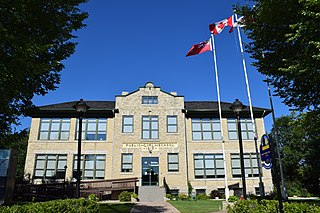 Gimli is a rural municipality located in the Interlake Region of south-central Manitoba, Canada, on the western shore of Lake Winnipeg. It is about 75 kilometres (47 mi) north of the provincial capital Winnipeg. The rural municipality's population in the Canada 2016 Census was 6,181.

The Henry Marshall Tory Medal is an award of the Royal Society of Canada "for outstanding research in a branch of astronomy, chemistry, mathematics, physics, or an allied science". It is named in honour of Henry Marshall Tory and is awarded bi-annually. The award consists of a gold plated silver medal.

Gunnar Solmunder (Solly) Thorvaldson, was a politician in Manitoba, Canada. He served in the Legislative Assembly of Manitoba from 1941 to 1949, and in the Senate of Canada from 1958 until his death. Originally elected as a Conservative, he sat as a Progressive Conservative after the party changed its name in 1943.

Thorvaldsen is a surname.

The 1941 Manitoba general election was held on April 22, 1941 to elect Members of the Legislative Assembly of the Province of Manitoba, Canada.

The 1936 Manitoba general election was held July 27, 1936 to elect Members of the Legislative Assembly of the Province of Manitoba, Canada.

Icelandic Canadians are Canadian citizens of Icelandic ancestry or Iceland-born people who reside in Canada.

Taras Demeter Ferley was a publisher and politician in Manitoba, Canada. He served in the Legislative Assembly of Manitoba from 1915 to 1920 as a supporter of the Liberal Party, and is notable as the first Ukrainian Canadian to be elected to Manitoba's legislature.

Sveinn Thorvaldson was a politician in Manitoba, Canada. He served in the Legislative Assembly of Manitoba from 1914 to 1915, as a member of the Conservative Party.

The Match King is a 1932 American Pre-Code drama film made by First National Pictures, directed by William Keighley and Howard Bretherton. The film starred Warren William and Lili Damita, and follows the rise and fall of Swedish safety match tycoon Ivar Kreuger. Based on the novel by Einar Thorvaldson, the film was released in December 31, 1932.

Copyright was a Canadian alternative rock band, active in the 1990s and early 2000s.

Catherine Carlson was appointed to the Provincial Court of Manitoba on November 23, 2006.

Thorbergur Thorvaldson M.Sc., PhD. was an Icelandic-Canadian chemist. He was the head of the Department of Chemistry at the University of Saskatchewan.

Lee Ann Martin was appointed to the Provincial Court of Manitoba on September 17, 2007.

Martin Shayne "Marty" Minuk is a defence lawyer from Winnipeg, Manitoba, Canada. He received his law degree from the University of Manitoba in 1978. Since 2005, he has been a partner at the law firm Aikins, MacAulay, and Thorvaldson.

Sveinn may refer to:

Thorvaldson may refer to: