Thomas Aaron Hunt is an Australian-born former English cricketer and grandson of John Hunt. He made four first-class appearances during a career that saw him appear for Middlesex and Somerset. He represented both clubs in all 3 formats of the game including first-class, List A and Twenty20 matches. The highlight of this was playing in the victorious Middlesex side that beat the touring Australian test team at Lords in 2001, Middlesex being the only side that tour to beat Australia. In 2004, batting at number 11 with John Francis, his four runs helped set a new record tenth wicket partnership for Somerset in Twenty20 cricket. [1]

His career was held back by a consistent cartilage knee injury (3 surgery`s) from the age of 16 and continued until needing to retire at 22. 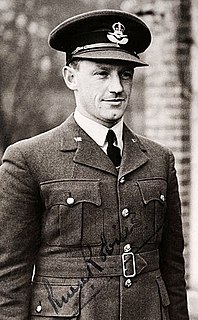 Somerset County Cricket Club is one of eighteen first-class county clubs within the domestic cricket structure of England and Wales. It represents the historic county of Somerset. Founded in 1875, Somerset was initially regarded as a minor county until official first-class status was gained in 1895. Somerset has competed in the County Championship since 1891 and has subsequently played in every top-level domestic cricket competition in England. The club's limited overs team was formerly named the Somerset Sabres, but is now known only as Somerset.

Samuel Moses James Woods was an Australian sportsman who represented both Australia and England at Test cricket, and appeared thirteen times for England at rugby union, including five times as captain. He also played at county level in England at both soccer and hockey. At cricket—his primary sport—he played over four hundred first-class matches in a twenty-four-year career. The majority of these matches were for his county side, Somerset, whom he captained from 1894 to 1906. A. A. Thomson described him thus: "Sammy ... radiated such elemental force in hard hitting, fast bowling and electrical fielding that he might have been the forerunner of Sir Learie Constantine."

Cameron Leon White is an Australian cricketer and former Australian Twenty20 and Victorian Bushrangers captain. A powerful middle order batsman and right-arm leg-spin bowler, White made his first-class cricket debut as a teenager in the 2000–01 season for the Victorian Bushrangers as a bowling all-rounder. Early comparisons with Victoria teammate Shane Warne faded as White took on a role closer to that of Andrew Symonds, a batsman who bowled occasionally, and bats aggressively with flat sixes around his leg side. 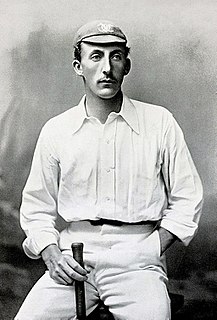 Ernest Austin Halliwell, sometimes known as Baberton Halliwell was a first-class cricketer, who played eight Test matches for South Africa between 1892 and 1902, including three as captain. He played as a wicket-keeper, and was the first to put raw steaks inside his gloves to protect his hands. At his peak, he was considered one of the best wicket-keepers in the world, and was named one of the Wisden Cricketers of the Year in 1905. He was particularly praised for standing close to the wickets, even against fast bowlers. 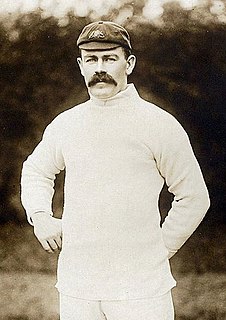 The Australian cricket team toured England during the 1902 English cricket season. The five-Test series between the two countries has been fondly remembered; in 1967 the cricket writer A. A. Thomson described the series as "a rubber more exciting than any in history except the Australia v West Indies series in 1960–61". Australia had won the previous three Test rubbers between the two countries, and now won their fourth successive series, by two matches to one with two draws. In the process they "beat the records of all their predecessors in the country" by losing only two of 39 matches during the tour, their defeats being against England in the Fifth Test and in the first of their two fixtures against Yorkshire. The remaining 37 matches gave 23 wins for Australia and 14 draws. 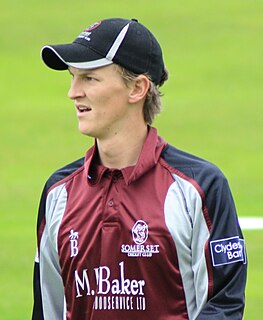 Maximilian Thomas Charles Waller is an English cricketer. He is a right-handed batsman and a leg break bowler. He plays first-class cricket for Somerset County Cricket Club.

William Territt Greswell was an English first-class cricketer who played for Somerset from 1908 to 1930. But his career as a tea-planter with the family company in Sri Lanka meant that he appeared in only 115 first-class matches for the county in that period, and was a regular player in only five seasons, dotted over almost 20 years.