Thoscora brugea is a moth of the Megalopygidae family. It was described by William Schaus in 1904. It is found in Venezuela. [1] 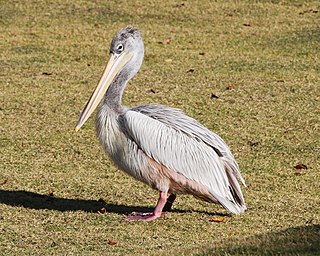 The pink-backed pelican is a bird of the pelican family. It is a resident breeder in the swamps and shallow lakes of Africa, southern Arabia, and southern India; it has also apparently extirpated in Madagascar.

The greyish saltator is a passerine bird in the tanager family Thraupidae that is widespread in the tropical Americas. In El Salvador, it is well known as dichosofui after the "elaborate" version of its call, which sounds like a drawn-out ¡dichoso fui!, Spanish for "I was happy!"

The rock vole is a medium-sized vole found in eastern North America. It is also called the yellow-nosed vole.

A gley is a wetland soil that unless drained is saturated with groundwater for long enough to develop a characteristic gleyic colour pattern. The pattern is essentially made up of reddish, brownish, or yellowish colours at surfaces of soil particles and/or in the upper soil horizons mixed with greyish/blueish colours inside the peds and/or deeper in the soil. Gleysols are also known as Gleyzems, meadow soils, Aqu-suborders of Entisols, Inceptisols and Mollisols, or as groundwater soils and hydro-morphic soils. 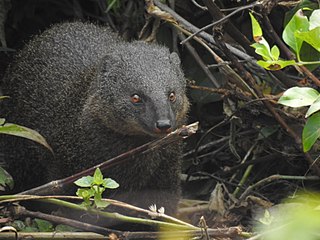 The Indian brown mongoose is a mongoose species native to the Western Ghats in India and the western coast in Sri Lanka. It is listed as least concern on the IUCN Red List.

The long-tailed dwarf hamster is a species of rodent in the family Cricetidae. It is found in China, Kazakhstan, Mongolia, and Russia.

The Zaisan mole vole, or eastern mole vole, is a species of rodent in the family Cricetidae. It is found in central Asia.

The Mount Oku hylomyscus is a species of rodent in the family Muridae. Found only on Mount Oku, Cameroon, in tropical Central Africa, its natural habitat is tropical moist montane forests. It has a very small range and is threatened by habitat destruction, so the International Union for Conservation of Nature has rated its conservation status as being "critically endangered".

Microryzomys altissimus, also known as the Páramo colilargo or highland small rice rat, is a species of rodent in the genus Microryzomys of family Cricetidae. It is found in Colombia, Ecuador, and Peru, but the Colombian segment may be a separate species. 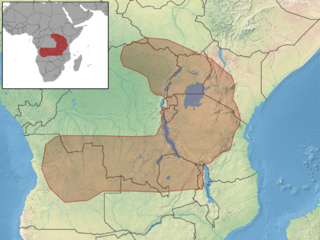 Hildegarde's broad-headed mouse or Hildegarde's zelotomys, is a species of rodent in the family Muridae. It is found in Central Africa.

The band-winged nightjar or greater band-winged nightjar is a species of nightjar in the family Caprimulgidae. It is widespread in South America, where it is found in the Andes, Venezuelan Coastal Range, Santa Marta Mountains, Tepuis, most of Chile, Argentina, Paraguay, Uruguay and eastern Brazil. It occurs in a wide range of habitats, from the edge of humid montane forest to shrubby semi-deserts and urban rooftops. 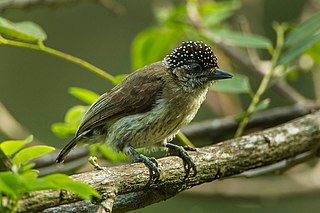 The greyish piculet is a species of bird in the family Picidae. It is endemic to Colombia.

The alpine shrew is a species of mammal in the family Soricidae. It is found in the alpine meadows and coniferous forests of Southern European mountain ranges: the Alps, the Pyrenees, the Carpathian Mountains and the Balkans.

Glaucous is used to describe the pale grey or bluish-green appearance of the surfaces of some plants, as well as in the names of birds, such as the glaucous gull, glaucous-winged gull, glaucous macaw, and glaucous tanager.

Atethmia centrago is a moth of the family Noctuidae. It is found in Europe except Scandinavia and Italy; also in Asia Minor, Armenia, Syria and Palestine.

Amanita nothofagi is a species of fungus in the family Amanitaceae. Endemic to New Zealand, the species was first described by mycologist Greta Stevenson in 1962. The fruit bodies have dark brown caps that are up to 13 cm (5.1 in) in diameter and covered with patches of soft greyish-brown scales or warts. The gills underneath the cap are crowded together, free from attachment to the stem, and white, becoming tinged with yellow in age. The stem of the mushroom is 4–14 cm (1.6–5.5 in) long by 0.5–2.5 cm (0.2–1.0 in) thick, and has a ring. The spore print is white, and individual spores are spherical to ellipsoid, measuring 7.5–9 by 7.5–9 micrometres. The mushroom may be confused with another New Zealand species, A. australis, but can be distinguished by certain characteristics. Amanita nothofagi is a mycorrhizal species, and grows in association with native New Zealand trees such as Southern Beech.

Thoscora rubrivena is a moth of the family Megalopygidae. It was described by E. Dukinfield Jones in 1912. It is found in Brazil.

Thoscora acca is a moth of the Megalopygidae family. It was described by William Schaus in 1892. It is found in Guyana, Panama and Costa Rica.