Thrashbeast From Hell is a Split EP by thrash metal bands Nocturnal & Toxic Holocaust released under Witchhammer Productions. [1] [2] The album was released on Tape limited to only 500 hand numbered copies. 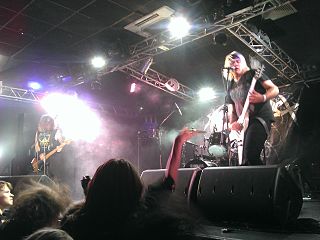 An Overdose of Death... is the third full-length album released by American thrash metal band Toxic Holocaust on September 2, 2008. Music videos have been made for "Wild Dogs", "Nuke the Cross", and "The Lord of the Wasteland".

Bestial Mockery is a Swedish black metal band formed in Uddevalla in 1995 by the quartet of Carl "Master Motorsåg" Bildt, Micke "Doomanfanger" Petersson, Jocke "Christcrusher" and Carl "Warslaughter". The band's stated aim at that time was to "channel perverted lusts for Satanic bloody Metal". Although they split up in 2008, Bestial Mockery released four full-length albums for Metal Blood Music, Osmose and Season of Mist, as well as a large number of stand-alone EPs and split releases with other underground metal acts. In a review of Slaying the Life in Decibel magazine, a similarity between the band and Nunslaughter was noted. As of November 11, 2011, the band is active again. 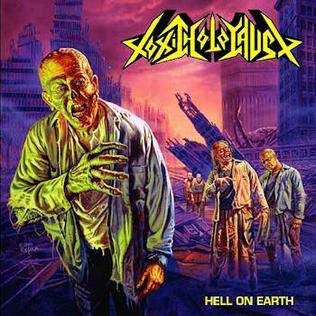 Hell on Earth is the second album by extreme metal band Toxic Holocaust.

Toxic Thrash Metal is a 2004 compilation album by thrash metal band Toxic Holocaust. It was originally released on cassette tape limited to 500 copies.

Only Deaf is Real is a live album by thrash metal band Toxic Holocaust. The release of this album was limited to 500 copies.

Death Master is an EP by Toxic Holocaust.

Power From Hell is an EP by Toxic Holocaust.

Gravelord is an EP by Toxic Holocaust. 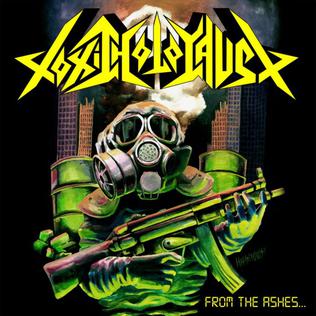 From the Ashes of Nuclear Destruction is a 2013 compilation album by thrash metal band Toxic Holocaust. The album is compiled of singles and rarities, such as demo versions from studio albums and rare singles from the various split albums they have released.

Brazilian Slaughter 2006 is a live concert video album by Toxic Holocaust, released in 2008 under Mutilation Records and Unsilent Records, recorded in Brazil.

Implements of Mass Destruction / Nuclear Apocalypse:666 is a Split EP by thrash metal bands Hellacaust and Toxic Holocaust released in 2002.