In automata theory, the thread automaton (plural: automata) is an extended type of finite-state automata that recognizes a mildly context-sensitive language class above the tree-adjoining languages. [1]

A thread automaton consists of

One may prove that δ(B)=u for POP and SPOP transitions, and δ(C)=⊥ for SPUSH transitions. [2]

An input string is accepted by the automaton if there is a sequence of transitions changing the initial into the final configuration.

In the theory of computation, a branch of theoretical computer science, a pushdown automaton (PDA) is a type of automaton that employs a stack.

In computer science and automata theory, a Büchi automaton is a type of ω-automaton, which extends a finite automaton to infinite inputs. It accepts an infinite input sequence if there exists a run of the automaton that visits one of the final states infinitely often. Büchi automata recognize the omega-regular languages, the infinite word version of regular languages. They are named after the Swiss mathematician Julius Richard Büchi, who invented this kind of automaton in 1962.

In automata theory, a finite-state machine is called a deterministic finite automaton (DFA), if 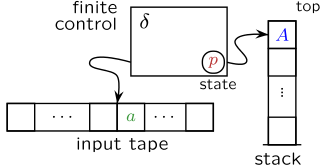 In automata theory, a nested stack automaton is a finite automaton that can make use of a stack containing data which can be additional stacks. Like a stack automaton, a nested stack automaton may step up or down in the stack, and read the current symbol; in addition, it may at any place create a new stack, operate on that one, eventually destroy it, and continue operating on the old stack. This way, stacks can be nested recursively to an arbitrary depth; however, the automaton always operates on the innermost stack only.

A queue machine or queue automaton is a finite state machine with the ability to store and retrieve data from an infinite-memory queue. It is a model of computation equivalent to a Turing machine, and therefore it can process the same class of formal languages.

In automata theory, a branch of theoretical computer science, an ω-automaton is a variation of finite automata that runs on infinite, rather than finite, strings as input. Since ω-automata do not stop, they have a variety of acceptance conditions rather than simply a set of accepting states.

In computer science, Thompson's construction algorithm, also called the McNaughton-Yamada-Thompson algorithm, is a method of transforming a regular expression into an equivalent nondeterministic finite automaton (NFA). This NFA can be used to match strings against the regular expression. This algorithm is credited to Ken Thompson.

In computational learning theory, induction of regular languages refers to the task of learning a formal description of a regular language from a given set of example strings. Although Mark E. Gold has shown that not every regular language can be learned this way, approaches have been investigated for a variety of subclasses. They are sketched in this article. For learning of more general grammars, see Grammar induction.

In theoretical computer science, in particular in formal language theory, Kleene's algorithm transforms a given nondeterministic finite automaton (NFA) into a regular expression. Together with other conversion algorithms, it establishes the equivalence of several description formats for regular languages. Alternative presentations of the same method include the "elimination method" attributed to Brzozowski and McCluskey, the algorithm of McNaughton and Yamada, and the use of Arden's lemma.

In computer science, in particular in formal language theory, a quotient automaton can be obtained from a given nondeterministic finite automaton by joining some of its states. The quotient recognizes a superset of the given automaton; in some cases, handled by the Myhill–Nerode theorem, both languages are equal.