Last updated May 07, 2022
Military funeral rite
Not to be confused with 21-gun salute.

The three-volley salute is a ceremonial act performed at military funerals and sometimes also police funerals. The custom originates from the European dynastic wars,[ which? ] in which the fighting ceased so that the dead and wounded could be removed. After this was accomplished, three shots were fired into the air to signal that the battle could resume. [1] [ better source needed ]

It should not be confused with the 21-gun salute (or 19-gun or 17-gun, etc.) which is fired by a battery of artillery pieces.

In the United States it is part of the drill and ceremony of the Honor Guard. It consists of a rifle party firing blank cartridges into the air three times.

A rifle party usually has an odd number of members, from three to seven. The firearm used is typically a rifle, but at some police funerals, shotguns or handguns are used. The party usually stands so that the muzzles are pointed over the casket. However, if mourners are present near the grave, the party stands some distance away (often recommended at least 50 feet) so as to not deafen the attendees and to minimize the disturbance. If the service is being performed indoors, the firing party stands outside the building, often near the front entrance. [2] On the command of the NCO-in-charge, the party raises their weapons and fires three times in unison. [2]

Modern United States military parties use M1, M14 or M16 rifles. The use of blank cartridges means these weapon's semi-automatic gas action will not function, requiring manual cycling of the next round between shots. [2] Some parties equip the rifle with a blank-firing adapter, which eliminates this step from the drill after the first shot, though this is seen by some as less traditional. Similarly, the M1 and M14 are generally preferred over the current issue M16 because the appearance of these older rifles is more traditional and the charging handles are more easily operated in a dignified, ceremonial manner.

A similar ceremony is used by the armed forces of the United Kingdom and the Commonwealth.

Irish Republicans also fire a three-volley salute at the funerals of IRA and INLA volunteers. [3] [4] [5]

A machine gun is a fully automatic, rifled autoloading firearm designed for sustained direct fire with rifle cartridges. Other automatic firearms such as assault rifles and automatic rifles are typically designed more for firing short bursts rather than continuous firepower, and not considered machine guns.

A rifle is a long-barreled firearm designed for accurate shooting, with a barrel that has a helical pattern of grooves (rifling) cut into the bore wall. In keeping with their focus on accuracy, rifles are typically designed to be held with both hands and braced firmly against the shooter's shoulder via a buttstock for stability during shooting. Rifles are used extensively in warfare, self defense, law enforcement, crime, hunting, and shooting sports. 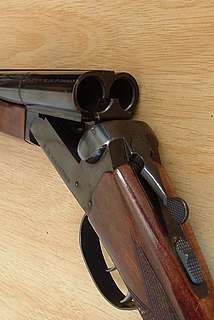 The M1 Garand or M1 Rifle is a semi-automatic rifle that was the United States' service rifle during World War II and the Korean War.

A musket is a muzzle-loaded long gun that appeared as a smoothbore weapon in the early 16th century, at first as a heavier variant of the arquebus, capable of penetrating heavy armour. By the mid-16th century, this type of musket went out of use as heavy armor declined, but the term musket continued as the name given for any hand held long gun until the mid-19th century. This style of musket was retired in the 19th century when rifled muskets became common as a result of cartridged breech-loading firearms introduced by Casimir Lefaucheux in 1835, the invention of the Minié ball by Claude-Étienne Minié in 1849, and the first reliable repeating rifle produced by Volcanic Repeating Arms in 1854. By the time that repeating rifles became common, they were known as simply "rifles", ending the era of the musket. 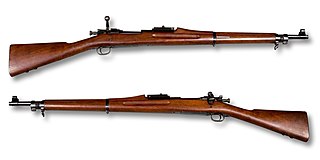 The M1903 Springfield, officially the United States Rifle, Caliber .30-06, Model 1903, is an American five-round magazine-fed, bolt-action service repeating rifle, used primarily during the first half of the 20th century.

The SKS is a semi-automatic rifle designed by Soviet small arms designer Sergei Gavrilovich Simonov in 1945. 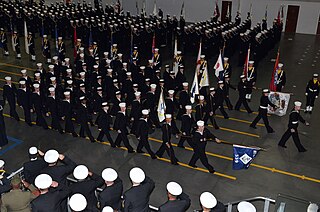 Drill commands are generally used with a group that is marching, most often in military foot drill or marching band. Drill commands are usually heard in major events involving service personnel, reservists and veterans of a country's armed forces, and by extension, public security services and youth uniformed organizations. 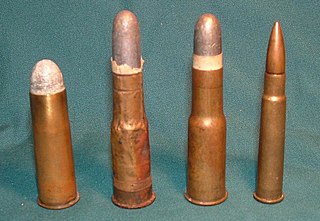 The Martini–Henry is a breech-loading single-shot rifle with a lever action that was used by the British Army. It first entered service in 1871, eventually replacing the Snider–Enfield, a muzzle-loader converted to the cartridge system. Martini–Henry variants were used throughout the British Empire for 47 years. It combined the dropping-block action first developed by Henry O. Peabody and improved by the Swiss designer Friedrich von Martini, combined with the polygonal rifling designed by Scotsman Alexander Henry.

A military funeral is a memorial or burial rite given by a country's military for a soldier, sailor, marine or airman who died in battle, a veteran, or other prominent military figures or heads of state. A military funeral may feature guards of honor, the firing of volley shots as a salute, drumming and other military elements, with a flag draping over the coffin.

The Jarmann M1884 is a Norwegian bolt-action repeating rifle designed in 1878 adopted in 1884. The Jarmann's adoption, and subsequent modifications, turned the Norwegian Army from a fighting force armed with single-shot black-powder weapons into a force armed with modern repeating weapons firing smokeless ammunition. Several thousand were manufactured to equip the Norwegian Armed Forces in the 1880s, and it also saw some, though very limited, use in Sweden. The design is unique, and was the brainchild of Norwegian engineer Jacob Smith Jarmann. After the design had been phased out of the Norwegian Army, a number of the weapons were rebuilt as harpoon guns.

The .45-70 rifle cartridge, also known as the .45-70 Government and .45-70 Springfield, was developed at the U.S. Army's Springfield Armory for use in the Springfield Model 1873, which is known to collectors as the "Trapdoor Springfield." The new cartridge was a replacement for the stop-gap .50-70 Government cartridge, which had been adopted in 1866, one year after the end of the American Civil War. 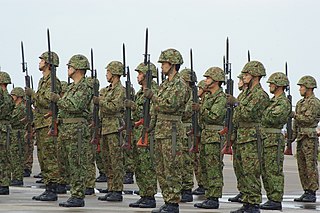 Present arms is a two-part drill command used by many militaries and public safety professionals in the world as a sign of respect. It comes from the old British command "Arms to the present!" 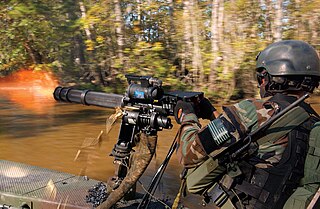 A multiple-barrel firearm is any type of firearm with more than one gun barrel, usually to increase the rate of fire or hit probability and to reduce barrel erosion/overheating.

A military funeral in the United States is a memorial or burial rite conducted by the United States Armed Forces for a Soldier, Marine, Sailor, Coast Guardsman, Airman, or Guardian who died in battle, a veteran, or other prominent military figures or a president. A military funeral may feature guards of honor, the firing of volley shots as a salute, drumming and other military elements, with a flag draping over the coffin.