In computer science, a three-way comparison takes two values A and B belonging to a type with a total order and determines whether A < B, A = B, or A > B in a single operation, in accordance with the mathematical law of trichotomy.

Many processors have instruction sets that support such an operation on primitive types. Some machines have signed integers based on a sign-and-magnitude or one's complement representation (see signed number representations), both of which allow a differentiated positive and negative zero. This does not violate trichotomy as long as a consistent total order is adopted: either −0 = +0 or −0 < +0 is valid. Common floating point types, however, have an exception to trichotomy: there is a special value "NaN" (Not a Number) such that x< NaN, x> NaN, and x = NaN are all false for all floating-point values x (including NaN itself).

In C, the functions strcmp and memcmp perform a three-way comparison between strings and memory buffers, respectively. They return a negative number when the first argument is lexicographically smaller than the second, zero when the arguments are equal, and a positive number otherwise. This convention of returning the "sign of the difference" is extended to arbitrary comparison functions by the standard sorting function qsort , which takes a comparison function as an argument and requires it to abide by it.

In C++, the C++20 revision adds the "spaceship operator" <=>, which similarly returns the sign of the difference and can also return different types (convertible to signed integers) depending on the strictness of the comparison. [1]

In Perl (for numeric comparisons only, the cmp operator is used for string lexical comparisons), PHP (since version 7), Ruby, and Apache Groovy, the "spaceship operator" <=> returns the values −1, 0, or 1 depending on whether A < B, A = B, or A > B, respectively. The Python 2.x cmp(removed in 3.x), OCaml compare, and Kotlin compareTo functions compute the same thing. In the Haskell standard library, the three-way comparison function compare is defined for all types in the Ord class; it returns type Ordering, whose values are LT (less than), EQ (equal), and GT (greater than): [2]

Many object-oriented languages have a three-way comparison method, which performs a three-way comparison between the object and another given object. For example, in Java, any class that implements the Comparable interface has a compareTo method which either returns a negative integer, zero, or a positive integer, or throws a NullPointerException (if one or both objects are null). Similarly, in the .NET Framework, any class that implements the IComparable interface has such a CompareTo method.

Since Java version 1.5, the same can be computed using the Math.signum static method if the difference can be known without computational problems such as arithmetic overflow mentioned below. Many computer languages allow the definition of functions so a compare(A,B) could be devised appropriately, but the question is whether or not its internal definition can employ some sort of three-way syntax or else must fall back on repeated tests.

When implementing a three-way comparison where a three-way comparison operator or method is not already available, it is common to combine two comparisons, such as A = B and A < B, or A < B and A > B. In principle, a compiler might deduce that these two expressions could be replaced by only one comparison followed by multiple tests of the result, but mention of this optimisation is not to be found in texts on the subject.

In some cases, three-way comparison can be simulated by subtracting A and B and examining the sign of the result, exploiting special instructions for examining the sign of a number. However, this requires the type of A and B to have a well-defined difference. Fixed-width signed integers may overflow when they are subtracted, floating-point numbers have the value NaN with undefined sign, and character strings have no difference function corresponding to their total order. At the machine level, overflow is typically tracked and can be used to determine order after subtraction, but this information is not usually available to higher-level languages.

In one case of a three-way conditional provided by the programming language, Fortran's now-deprecated three-way arithmetic IF statement considers the sign of an arithmetic expression and offers three labels to jump to according to the sign of the result:

The three-way comparison operator for numbers is denoted as <=> in Perl, Ruby, Apache Groovy, PHP, Eclipse Ceylon, and C++, and is called the spaceship operator. [3]

The name's origin is due to it reminding Randal L. Schwartz of the spaceship in an HP BASIC Star Trek game. [4] Another coder has suggested that it was so named because it looked similar to Darth Vader's TIE fighter in the Star Wars saga. [5]

Here is a composition example in Perl.

Note that cmp, in Perl, is for strings, since <=> is for numbers. Two-way equivalents tend to be less compact but not necessarily less legible. The above takes advantage of short-circuit evaluation of the || operator, and the fact that 0 is considered false in Perl. As a result, if the first comparison is equal (thus evaluates to 0), it will "fall through" to the second comparison, and so on, until it finds one that is non-zero, or until it reaches the end.

In some languages, including Python, Ruby, Haskell, etc., comparison of lists is done lexicographically, which means that it is possible to build a chain of comparisons like the above example by putting the values into lists in the order desired; for example, in Ruby:

In computing, NaN, standing for Not a Number, is a member of a numeric data type that can be interpreted as a value that is undefined or unrepresentable, especially in floating-point arithmetic. Systematic use of NaNs was introduced by the IEEE 754 floating-point standard in 1985, along with the representation of other non-finite quantities such as infinities.

In computer programming, a bitwise operation operates on a bit string, a bit array or a binary numeral at the level of its individual bits. It is a fast and simple action, basic to the higher level arithmetic operations and directly supported by the processor. Most bitwise operations are presented as two-operand instructions where the result replaces one of the input operands. 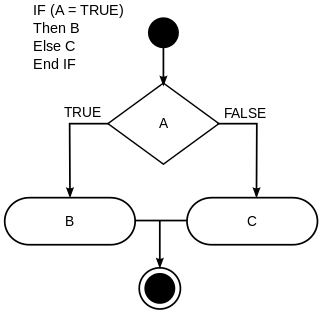 In computer science, conditional statements, conditional expressions and conditional constructs are features of a programming language, which perform different computations or actions depending on whether a programmer-specified boolean condition evaluates to true or false. Apart from the case of branch predication, this is always achieved by selectively altering the control flow based on some condition.

This is a list of operators in the C and C++ programming languages. All the operators listed exist in C++; the fourth column "Included in C", states whether an operator is also present in C. Note that C does not support operator overloading.

In computer programming, ?: is a ternary operator that is part of the syntax for basic conditional expressions in several programming languages. It is commonly referred to as the conditional operator, inline if (iif), or ternary if. An expression a ? b : c evaluates to b if the value of a is true, and otherwise to c. One can read it aloud as "if a then b otherwise c".

In computer programming, operators are constructs defined within programming languages which behave generally like functions, but which differ syntactically or semantically.

XPath 2.0 is a version of the XPath language defined by the World Wide Web Consortium, W3C. It became a recommendation on 23 January 2007. As a W3C Recommendation it was superseded by XPath 3.0 on 10 April 2014.

In computer science, the Boolean data type is a data type that has one of two possible values which is intended to represent the two truth values of logic and Boolean algebra. It is named after George Boole, who first defined an algebraic system of logic in the mid 19th century. The Boolean data type is primarily associated with conditional statements, which allow different actions by changing control flow depending on whether a programmer-specified Boolean condition evaluates to true or false. It is a special case of a more general logical data type —logic doesn't always need to be Boolean.

A bit array is an array data structure that compactly stores bits. It can be used to implement a simple set data structure. A bit array is effective at exploiting bit-level parallelism in hardware to perform operations quickly. A typical bit array stores kw bits, where w is the number of bits in the unit of storage, such as a byte or word, and k is some nonnegative integer. If w does not divide the number of bits to be stored, some space is wasted due to internal fragmentation.

In computer science, a relational operator is a programming language construct or operator that tests or defines some kind of relation between two entities. These include numerical equality and inequalities.

In computer programming, a sigil is a symbol affixed to a variable name, showing the variable's datatype or scope, usually a prefix, as in $foo, where $ is the sigil.