In the object-oriented programming paradigm, object can be a combination of variables, functions, and data structures; in particular in class-based variations of the paradigm it refers to a particular instance of a class.

In the relational model of database management, an object can be a table or column, or an association between data and a database entity (such as relating a person's age to a specific person). [1]

An important distinction in programming languages is the difference between an object-oriented language and an object-based language. A language is usually considered object-based if it includes the basic capabilities for an object: identity, properties, and attributes. A language is considered object-oriented if it is object-based and also has the capability of polymorphism, inheritance, encapsulation, and, possibly, composition. Polymorphism refers to the ability to overload the name of a function with multiple behaviors based on which object(s) are passed to it. Conventional message passing discriminates only on the first object and considers that to be "sending a message" to that object. However, some OOP languages such as Flavors and the Common Lisp Object System (CLOS) enable discriminating on more than the first parameter of the function. [2] Inheritance is the ability to subclass an object class, to create a new class that is a subclass of an existing one and inherits all the data constraints and behaviors of its parents but also adds new and/or changes one or more of them. [3] [4]

Rather than structure programs as code and data, an object-oriented system integrates the two using the concept of an "object". An object has state (data) and behavior (code). Objects can correspond to things found in the real world. So for example, a graphics program will have objects such as circle, square, menu. An online shopping system will have objects such as shopping cart, customer, product. The shopping system will support behaviors such as place order, make payment, and offer discount. The objects are designed as class hierarchies. So for example with the shopping system there might be high level classes such as electronics product, kitchen product, and book. There may be further refinements for example under electronic products: CD Player, DVD player, etc. These classes and subclasses correspond to sets and subsets in mathematical logic. [5] [6]

The object-oriented approach is not just a programming model. It can be used equally well as an interface definition language for distributed systems. The objects in a distributed computing model tend to be larger grained, longer lasting, and more service-oriented than programming objects.

A standard method to package distributed objects is via an Interface Definition Language (IDL). An IDL shields the client of all of the details of the distributed server object. Details such as which computer the object resides on, what programming language it uses, what operating system, and other platform-specific issues. The IDL is also usually part of a distributed environment that provides services such as transactions and persistence to all objects in a uniform manner. Two of the most popular standards for distributed objects are the Object Management Group's CORBA standard and Microsoft's DCOM. [8]

In addition to distributed objects, a number of other extensions to the basic concept of an object have been proposed to enable distributed computing:

Some of these extensions, such as distributed objects and protocol objects, are domain-specific terms for special types of "ordinary" objects used in a certain context (such as remote method invocation or protocol composition). Others, such as replicated objects and live distributed objects, are more non-standard, in that they abandon the usual case that an object resides in a single location at a time, and apply the concept to groups of entities (replicas) that might span across multiple locations, might have only weakly consistent state, and whose membership might dynamically change.

The Semantic Web is essentially a distributed-objects framework. Two key technologies in the Semantic Web are the Web Ontology Language (OWL) and the Resource Description Framework (RDF). RDF provides the capability to define basic objects—names, properties, attributes, relations—that are accessible via the Internet. OWL adds a richer object model, based on set theory, that provides additional modeling capabilities such as multiple inheritance.

OWL objects are not like standard large-grained distributed objects accessed via an Interface Definition Language. Such an approach would not be appropriate for the Internet because the Internet is constantly evolving and standardization on one set of interfaces is difficult to achieve. OWL objects tend to be similar to the kinds of objects used to define application domain models in programming languages such as Java and C++.

However, there are important distinctions between OWL objects and traditional object-oriented programming objects. Traditional objects get compiled into static hierarchies usually with single inheritance, but OWL objects are dynamic. An OWL object can change its structure at run time and can become an instance of new or different classes.

Another critical difference is the way the model treats information that is currently not in the system. Programming objects and most database systems use the "closed-world assumption". If a fact is not known to the system that fact is assumed to be false. Semantic Web objects use the open-world assumption, a statement is only considered false if there is actual relevant information that it is false, otherwise it is assumed to be unknown, neither true nor false.

OWL objects are actually most like objects in artificial intelligence frame languages such as KL-ONE and Loom.

The following table contrasts traditional objects from Object-Oriented programming languages such as Java or C++ with Semantic Web Objects: [10] [11]

In object-oriented programming, a class is an extensible program-code-template for creating objects, providing initial values for state and implementations of behavior. In many languages, the class name is used as the name for the class, the name for the default constructor of the class, and as the type of objects generated by instantiating the class; these distinct concepts are easily conflated. Although, to the point of conflation, one could argue that is a feature inherent in a language because of its polymorphic nature and why these languages are so powerful, dynamic and adaptable for use compared to languages without polymorphism present. Thus they can model dynamic systems more easily.

In software engineering and computer science, abstraction is: 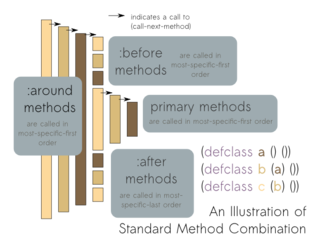 In computer science, a metaobject is an object that manipulates, creates, describes, or implements objects. The object that the metaobject pertains to is called the base object. Some information that a metaobject might define includes the base object's type, interface, class, methods, attributes, parse tree, etc. Metaobjects are examples of the computer science concept of reflection, where a system has access to its own internal structure. Reflection enables a system to essentially rewrite itself on the fly, to alter its own implementation as it executes.

In computing and systems design a loosely coupled system is one in which each of its components has, or makes use of, little or no knowledge of the definitions of other separate components. Subareas include the coupling of classes, interfaces, data, and services. Loose coupling is the opposite of tight coupling.

The object–relational impedance mismatch is a set of conceptual and technical difficulties that are often encountered when a relational database management system (RDBMS) is being served by an application program written in an object-oriented programming language or style, particularly because objects or class definitions must be mapped to database tables defined by a relational schema. 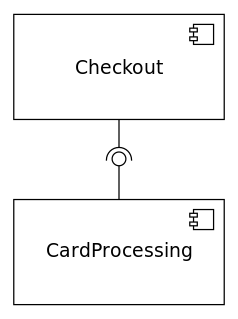 Component-based software engineering (CBSE), also called components-based development (CBD), is a branch of software engineering that emphasizes the separation of concerns with respect to the wide-ranging functionality available throughout a given software system. It is a reuse-based approach to defining, implementing and composing loosely coupled independent components into systems. This practice aims to bring about an equally wide-ranging degree of benefits in both the short-term and the long-term for the software itself and for organizations that sponsor such 'software.'

In mathematical logic and computer science, some type theories and type systems include a top type that is commonly denoted with top or the symbol ⊤. The top type is sometimes called also universal type, or universal supertype as all other types in the type system of interest are subtypes of it, and in most cases, it contains every possible object of the type system. It is in contrast with the bottom type, or the universal subtype, which every other type is supertype of and it is often that the type contains no members at all.

Object-oriented design is the process of planning a system of interacting objects for the purpose of solving a software problem. It is one approach to software design.

Frames are an artificial intelligence data structure used to divide knowledge into substructures by representing "stereotyped situations". They were proposed by Marvin Minsky in his 1974 article "A Framework for Representing Knowledge". Frames are the primary data structure used in artificial intelligence frame language; they are stored as ontologies of sets.

In computing, an application programming interface (API) is an interface that defines interactions between multiple software applications or mixed hardware-software intermediaries. It defines the kinds of calls or requests that can be made, how to make them, the data formats that should be used, the conventions to follow, etc. It can also provide extension mechanisms so that users can extend existing functionality in various ways and to varying degrees. An API can be entirely custom, specific to a component, or designed based on an industry-standard to ensure interoperability. Through information hiding, APIs enable modular programming, allowing users to use the interface independently of the implementation.