In computer science, a container is a class, a data structure, [1] [2] or an abstract data type (ADT) whose instances are collections of other objects. In other words, they store objects in an organized way that follows specific access rules. The size of the container depends on the number of objects (elements) it contains. Underlying (inherited) implementations of various container types may vary in size and complexity, and provide flexibility in choosing the right implementation for any given scenario.

Containers can be characterized by the following three properties:

Container classes are expected to implement methods to do the following:

Containers are sometimes implemented in conjunction with iterators.

Containers may be classified as either single-value containers or associative containers.

Single-value containers store each object independently. Objects may be accessed directly or with an iterator.

Common data structures used to implement these abstract types include:

Widget toolkits also use containers, which are special widgets to group other widgets, such as windows, panels. Apart from their graphical properties, they have the same type of behavior as container classes, as they keep a list of their child widgets, and allow adding, removing, or retrieving widgets among their children.

In computer science, a double-ended queue is an abstract data type that generalizes a queue, for which elements can be added to or removed from either the front (head) or back (tail). It is also often called a head-tail linked list, though properly this refers to a specific data structure implementation of a deque.

FIFO – an acronym for first in, first out – in computing and in systems theory, is a method for organising the manipulation of a data structure – often, specifically a data buffer – where the oldest (first) entry, or 'head' of the queue, is processed first. 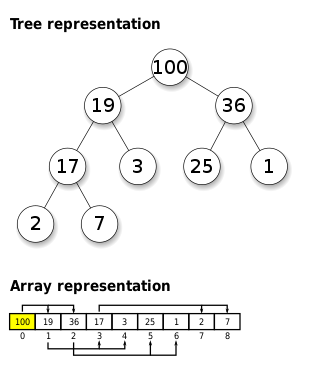 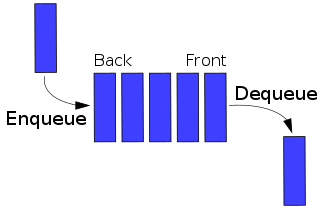 In computer programming, an iterator is an object that enables a programmer to traverse a container, particularly lists. Various types of iterators are often provided via a container's interface. Though the interface and semantics of a given iterator are fixed, iterators are often implemented in terms of the structures underlying a container implementation and are often tightly coupled to the container to enable the operational semantics of the iterator. An iterator performs traversal and also gives access to data elements in a container, but does not itself perform iteration. An iterator is behaviorally similar to a database cursor. Iterators date to the CLU programming language in 1974.

In computer science, a stack is an abstract data type that serves as a collection of elements, with two main principal operations:

The Java collections framework is a set of classes and interfaces that implement commonly reusable collection data structures.

In computer science, a collection or container is a grouping of some variable number of data items that have some shared significance to the problem being solved and need to be operated upon together in some controlled fashion. Generally, the data items will be of the same type or, in languages supporting inheritance, derived from some common ancestor type. A collection is a concept applicable to abstract data types, and does not prescribe a specific implementation as a concrete data structure, though often there is a conventional choice.

In object-oriented programming, behavioral subtyping is the principle that subclasses should satisfy the expectations of clients accessing subclass objects through references of superclass type, not just as regards syntactic safety but also as regards behavioral correctness. Specifically, properties that clients can prove using the specification of an object's presumed type should hold even though the object is actually a member of a subtype of that type.